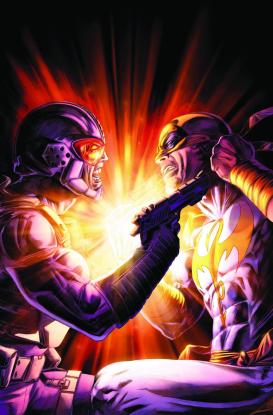 Spiraling out of Shadowland, a power vacuum was left in New York allowing thugs, hooligans and crime bosses to rise to new heights in the criminal underworld. Matt Murdock’s absence necessitated increased hero patrols. Enter Misty Knight, the longtime companion to Iron Fist. As head of the reestablished Heroes for Hire, Knight hires  heroes willing to take on jobs across the city hoping it’s enough to weed out corruption. Now three issues into the series, it’s accumulated a wealth of praise from news sites. Let’s find out if it’s warranted.

Heroes are for hire. The series focuses on Misty Knight who coordinates heroic efforts across New York, encouraging heroes to anti-heroes to help those in need. For a fee, obviously. The series features a rotating cast of characters, but there may be more to this than it seems. 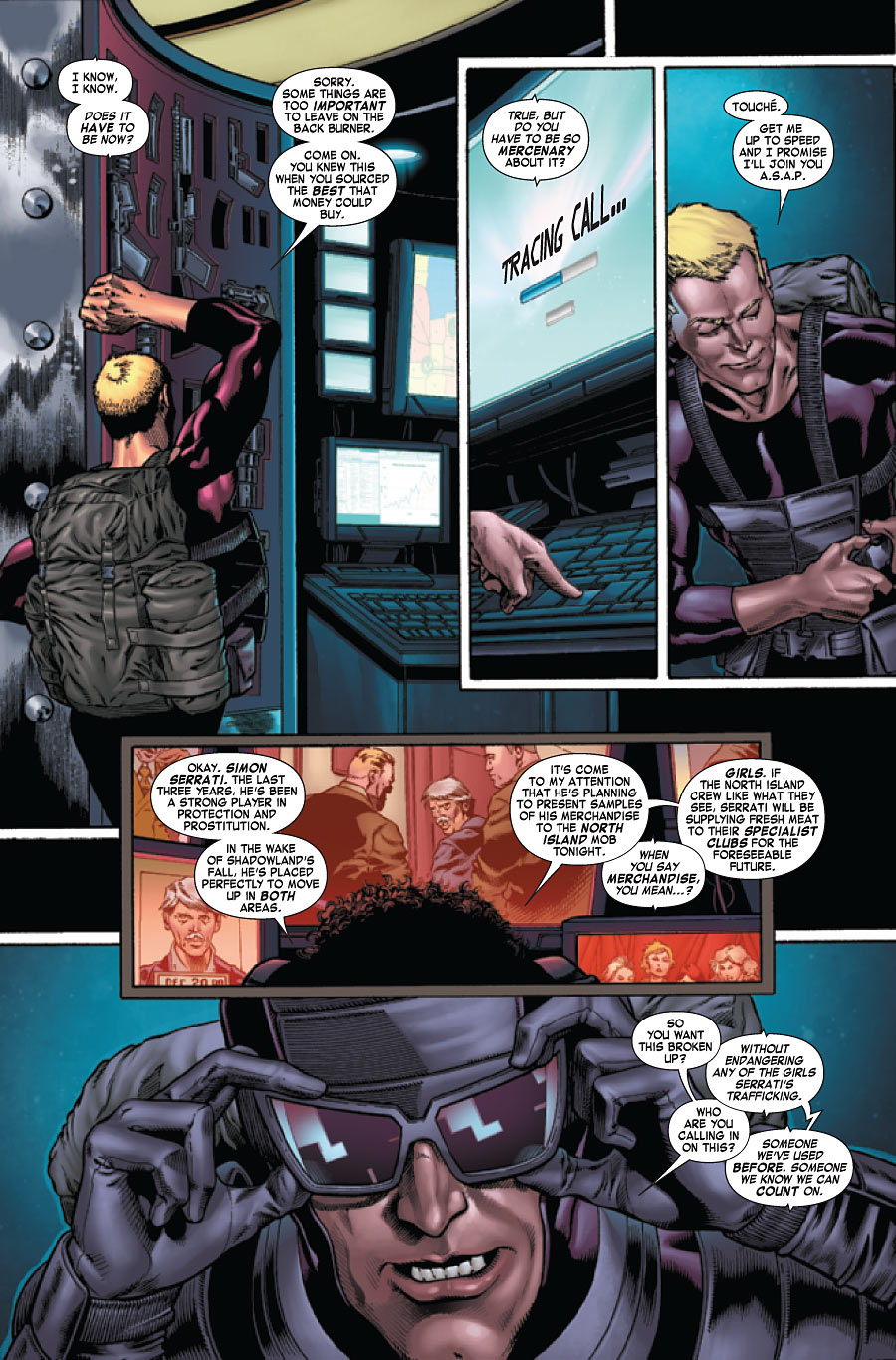 After the previous issue’s revelation, Paladin is shown speaking with Misty Knight once again as she tries to recruit him to assist in another job. Preoccupied with another “assignment”, he tells her he will assist the hero once he takes care of his other engagement. Meanwhile Moon Knight flies over a chain linked fence in broad daylight as Knight contacts him and also asks him to assist in taking down a cartel. At the same time, Paladin continues his other job; surveying associates of Misty. Beginning with Luke Cage and Jessica Jones with their child, and ultimately tracks Danny Rand to a chinese food restaurant and begins watching him also. Rand intuitively acknowledges he’s being watched and meets Paladin on a nearby rooftop for a minor “throwdown”

As they duke it out, Moon Knight continues through the warehouse and finds shipping containers full of human slaves. He continues opening containers only to find a viciously startling surprise as a velociraptor presumably from the Savage Land leaps in his direction. He struggles for a time until Misty patches Paladin through to Moon Knight and tells him how to subdue a Raptor. Unfortunately for him, his battle with Iron Fist is hardly over. Aside from briefly gaining the upper hand, Iron Fist defeats him but pulls back when Paladin mentions Misty Knight. After a short conversation, Paladin tells Rand about his concerns and asks if he’s for hire. 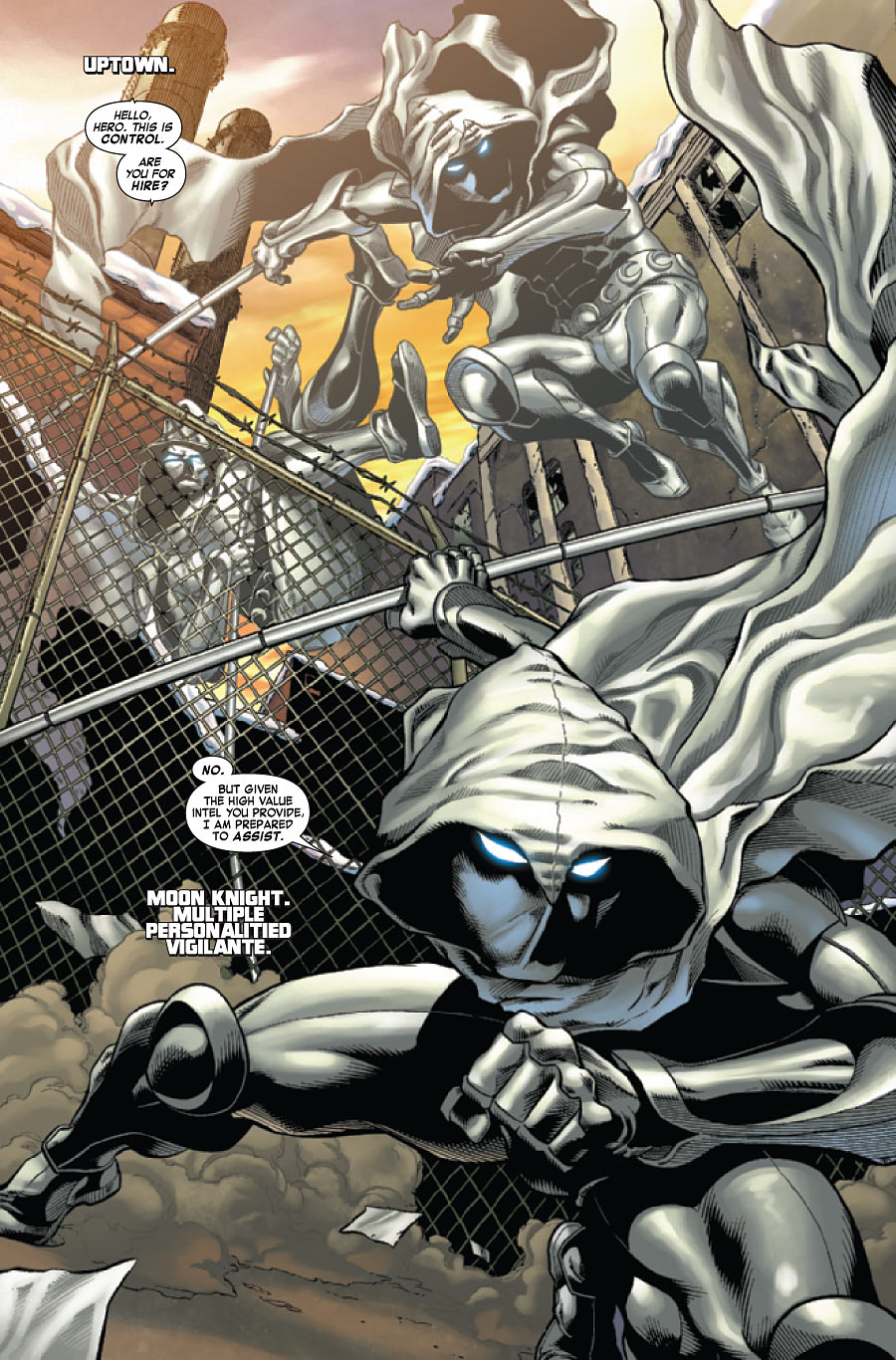 The pencils were touch and go throughout the issue. Some of the characters were done quite well, while others I question what Walker was doing. I felt like both Paladin and Iron Fist were drawn well, especially their one-sided fight which put their collective arsenal on display and was quite fun to look at. On the other hand, I don’t really like how Misty is being drawn. There are  some pages where she’s drawn to have this large muscularly defined face with protruding cheek bones and botox-esque lips (the page right after the Dragon Quest VI advertisement). Walker is inconsistent here though, as he does a better job on Knight later in the issue where it feels like her features are toned down significantly. In addition, Moon Knight felt really cartoonish in how he was drawn as opposed to the rugged depictions of the character elsewhere, notably his previous series’.

On the plus side, the page layouts were rather varied. Walker used a number of different panel layouts throughout the issue to help keep the pages fresh and interesting. I thought it was slick move to use a circular panel to represent Paladin’s use of a telescope to spy on Rand, while there’s another page where the lines dissolve altogether, but maintains the flow of a fight from scene to scene with it organically continuing from one swing to the next. How Moon Knight and Misty were drawn aside, the art was fairly good. Especially the Velociraptor. 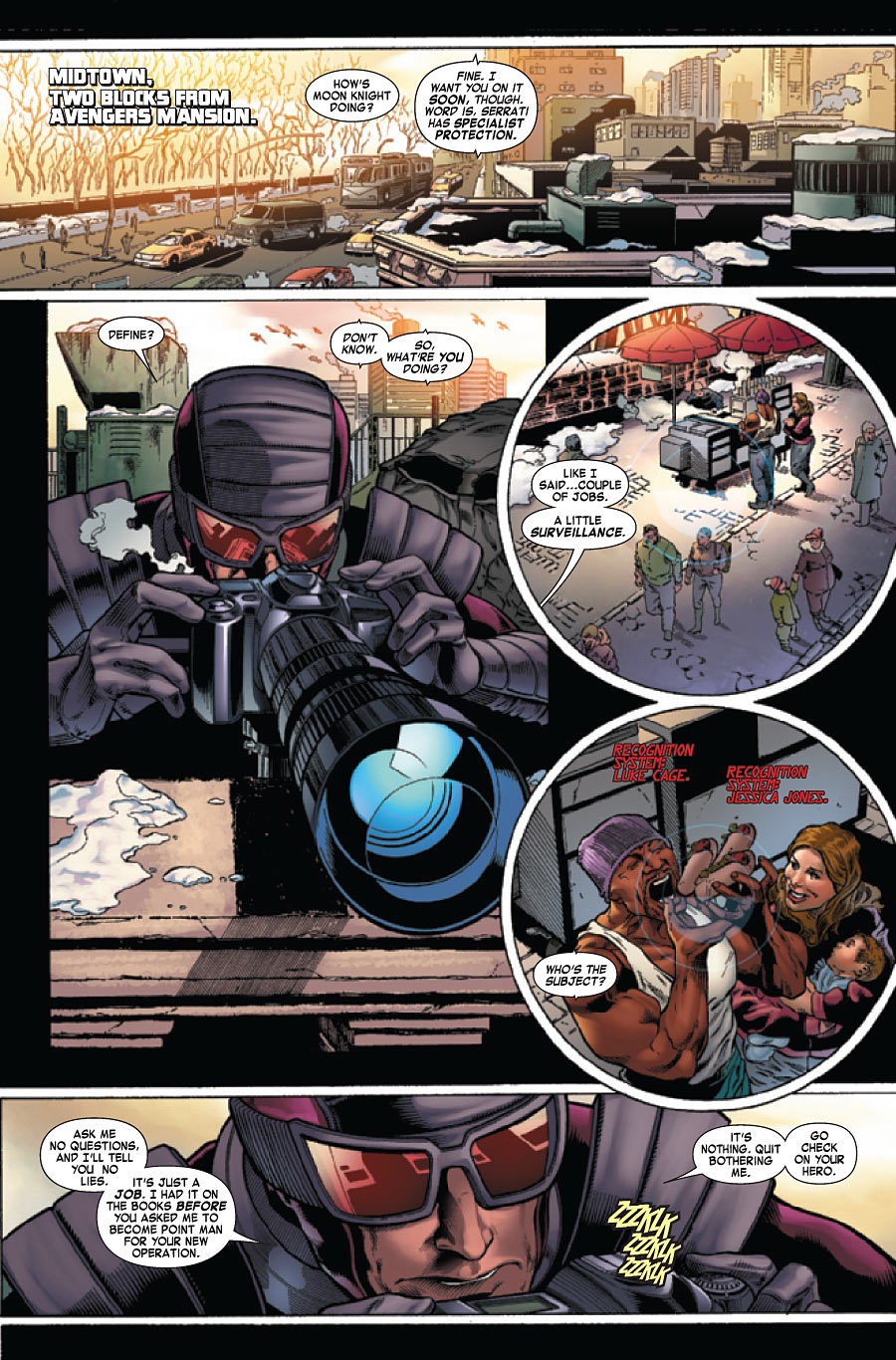 This book has had a load of praise heaped onto it over three issues, but I’m not sure it deserves it. I recall reading issue one and feeling rather bored by it, but felt it deserved some more time. After the third issue was accompanied with high praise, I’m sorry to deflate critics’ collective bubbles, but sliced bread this is not. The concept itself is a meld of Barbara Gordon’s Oracle and the classic Heroes for Hire scheme used when Iron Fist and Luke Cage were the central characters. It also feels like it has elements of DC’s current Brave and the Bold book. All of these pieces come together to create a modern Heroes for Hire scheme which introduces a rotating cast of characters into the book’s framework in order complete a job; each being responsible for a portion of the whole. Conceptually it’s a good idea, albeit not completely original in its foundation.

Issue three in particular continued the Misty Knight story, extending the allusions of Puppet Master’s involvement in the Heroes scheme. Despite my reservations, his role does offer some intrigue to the story by adding an element of mystery to the story structure. The problem I have though is the premise of hiring heroes to complete jobs they would normally have done otherwise. It never really made sense for superhero comics to indulge that, so for characters like Moon Knight, Rand, or Ghost Rider who have traditionally operated under more heroic pretenses (Rand’s involvement in the previous series notwithstanding) to rub elbows with characters like Elektra or Paladin doesn’t quite make sense. In the landscape of the book, it does based on how the operation is set up, but as a reader it doesn’t. The issue itself was okay, but hardly as good as it’s being advertised as. There was some development in the Misty mystery, as well as some great stuff with Iron Fist. Overall though, I feel like most critics are overrating this book, so to refer to this title as the benchmark for storytelling in the comic book medium or rating it as “great” is rather misleading.

This is one of those books I feel that you need to flip through before buying it. With the shifting cast, it’ll be hard to get involved in the story with characters like Misty or Paladin as central pieces unless you’re invested in them already. I can’t squarely say this title is consistently worth $2.99, because I don’t feel it is, while the writing has not proven strong enough yet. The story feels loose right now, the premise doesn’t quite make sense, but if you’re looking for a comic to pick up periodically that has your favourite B or C level character in it, I would highly recommend this book. As a monthly pick-up, that’s a different story you couldn’t hire me to tell.