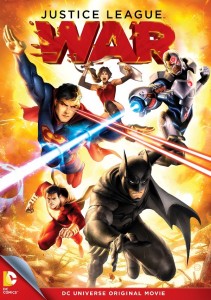 In Gotham City’s shadows lurks a mysterious figure, a silent guardian known only as the Batman. While battling crime and an ever-growing public distrust, he faces the injustices of the night alone. During a criminal pursuit, the Batman crosses paths with the arrogant intergalactic cop Green Lantern, and the unlikely duo uncovers an impending threat bigger and more deadly than anything the Earth has faced before. For the Earth to have a chance to survive, it will be a race to forge an uneasy alliance of its greatest super powers, including the Kryptonian alien, Superman; the Amazonian envoy, Wonder Woman; and the Scarlet Speedster, the Flash. Along with newcomers Cyborg and teen super hero Shazam, this awesome assembly of the world’s finest are prepared to meet evil head-on and offer mankind its only hope, if they don’t self-destruct first!

This one takes the comic as a framework and takes a different road to end up at the same destination: a story that’s heavy on fighting and very light on character development and story details.

With a title like War it’s hard not to make the story about fighting, and while there are great fight scenes in the movie it lacks in everything else. The premise is that heroes have been making news in cities around the U.S. and a common threat brings them together. Cyborg’s origin takes place in the movie and is the only real story happening; the invasion of Earth by Darkseid is odd, sketchy and isn’t fleshed out at all. In fact this could have just been a movie about Cyborg and been great, but it’s dragged down by the lack of development for everyone else. We learn almost nothing about the other heroes, how they came to be or even what they’ve been doing until now. Perhaps that will come in another movie.

It’s great to see Captain Marvel in a movie…oh wait, he’s called Shazam now. And he transforms by saying Shazam but then saying his name later doesn’t do anything so that’s just off. How do you introduce yourself if your name activates and deactivates your powers?

The Flash is well written and portrays a straight laced nice guy. Batman is dark and brooding, and to an extent so is Superman, which again is just weird. Green Lantern is nothing but sarcasm and it gets old fast. Shazam is a street wise thief and con artist, again weird, and Wonder Woman is well played. There’s this army guy assigned to her and he seems interested in her but it’s a dangling and unexplored plotline that should have been trimmed.

Then there’s the rating of this film: PG-13. After the Flashpoint Paradox I’m watching DC movies before I let my kids see them. It deserves the rating, as death and mayhem seem to take center stage. Just like the comic, Superman is killing parademons willy nilly and doesn’t seem to have any qualms doing it. Apparently DC thinks only adults are interested in watching Superman, Batman, Wonder Woman, Green Lantern and the rest. Hmm.

The voice acting was good, especially Shemar Moore as Cyborg: again, this character stole the film. The animation was good as well, with only a hint of anime-esque styling. The highlight of the film for me were the opening and closing sketched animation credits; very slick and fun to watch.

Aquaman was replaced by Shazam but the ending of the film indicates the next movie will be about Atlantis attacking. If you enjoyed Justice League Origin, which I find difficult to fathom, then you’ll get a kick out of Justice League: War.