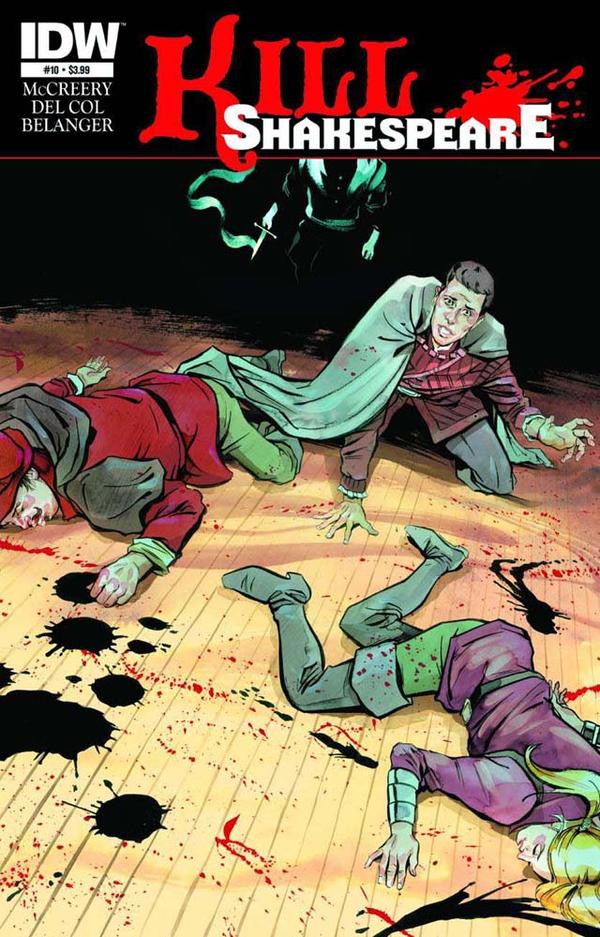 Having met Shakespeare in the previous issue, Hamlet and the Prodigals must face the possibility that their creator may not be all they imagined him to be, and that the forthcoming war with Richard and Lady Macbeth may not in their favour. As for myself, I just have to review the issue. I have it easy. Onward!

What happens when Shakespeare’s greatest creations come together ? An epic war between good and evil, that’s what. Kill Shakespeare features the Bard’s greatest heroes and villains as they attempt to either kill or save their creator, William Shakespeare. 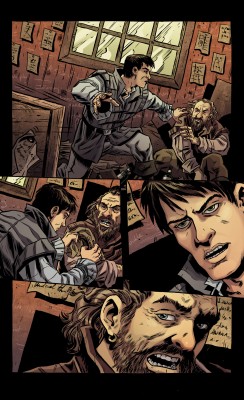 Picking up where issue nine left off, Hamlet and Shakespeare try to avoid the hurtling enchanted dagger coming toward them. After casting it into a wooden cupboard and pushing it to the ground, Hamlet asks Shakespeare for his help. Shakespeare denies both his hand and his quill, leaving Hamlet to his own devices in having to tell the prodigals of Shakespeare’s desertion. Leaving Shakespeare’s cottage, Hamlet returns to Falstaff and Romeo to tell them they’ve been forsaken by their creator. Iago, now a captive of the camp, smirks at his faux-comrades and tells Hamlet Lady Macbeth will destroy him once she kills Juliet, again smirking as he sarcastically asks to be reminded of her name with Romeo standing nearby.

On the battlefield the Prodigals prepare for war against Richard’s army. They push forward, but are met by volleys of arrows from Prodigal archers, forcing a hasty retreat by Richard’s men. Behind the lines, Richard requests Lady Macbeth to use her sorcery to decimate the Prodigals’ ranks, leading to their own retreat after several fireballs rain down from the sky. As they fall back, Hamlet and company arrive and join the fight, save for Hamlet himself. Lost in self-pity, he chooses to stay out of the battle much to the anger of Falstaff who berates his friend before joining the battle himself. He is soon after struck by a crossbow bolt, forcing Hamlet onto the battlefield to be with his wounded friend.

Central to the issue’s art are the battle scenes amidst the war between the Prodigals and Richard’s men. Belanger strings together a chaotic, but well detailed conflict from issue’s beginning up until its end, chronicling each stage from the ominous scenes of an empty battlefield to the volleys of arrows and fireballs that later litter the main stage.

Two instances where Belanger offers some fine work appear to book end the issue: in the early pages of the issue a page features the hurtling enchanted dagger in the centre of eight panels. With the dagger as its focus, the page follows a sequence of events as Hamlet tries to save Shakespeare while dodging the dagger himself. It follows their reactions and attempts almost frame by frame, instance by instance to follow each moment of action until Hamlet smites the dagger with a book. Later in the issue a similar device is used during the Falstaff scene where he is struck by an arrow. 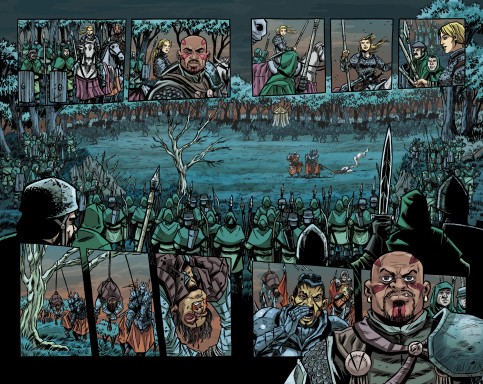 Here Belanger places focus on the comic as he is struck by the arrow, followed by three successive panels where he draws the panel in to a close-up of Falstaff’s face as he is struck. This panel is subsequently followed by one where Falstaff grabs the arrow in his chest, and one where he collapses to the ground. Herring colours these panels differently, using a duller blue as the scene shifts from an active, colourful landscape to a duller and more solemn sequence leading to Falstaff’s fate. Then leading towards the end, the colour of the battlefield gradually flushes back, ending with a mournful Hamlet holding his friend with Richard sitting atop his horse in the distance. Altogether the art was solid…even the horses, which have remarkably improved over the series.

It’s the fourth quarter and the Prodigals are down a few points to King Richard III and Lady Macbeth’s forces. Issue ten kicked off the final three issues of the series, and it does so with the much-anticipated battle between the forces of good against the Richard-Lady Macbeth alliance. With Shakespeare  seemingly on the bench, the Prodigals have been left to fight the war themselves, coupled with Hamlet loss of faith in himself and his quest. The issue itself though had its share of surprises, teasing both the death of Iago as a red herring early in light of the Kill Shakespeare creators’ online poll on which character would be killed off; this paved the way for the death of a main character later in the issue. I felt this was nicely executed and functionally pushes the story forward, more specifically in its potentially pushing Hamlet beyond his fatalism towards the hero he’s meant to be. The character’s final words are intended to push Hamlet to that point, and I felt the atmosphere, art, and overall tone of the writing directed the story in that direction and completed its intention. 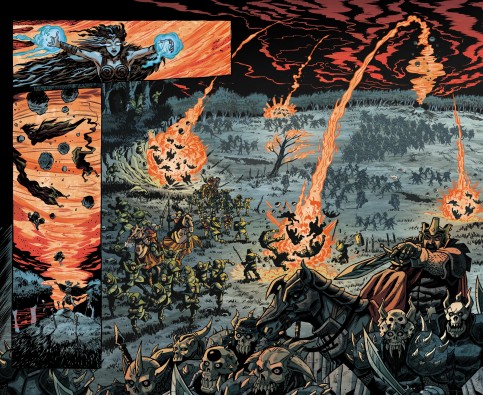 Several other plot threads we were woven through the battle-laden issue, such as the continuing revelation of Shakespeare’s pathetic personality traits that force the reader to almost sympathize with the creator’s own death-grip of his own fatalism. Here there’s a connection between the reclusive character of Shakespeare and the nature of Hamlet, who has retreated from life but still lives among civilization unlike the reclusive wizard. Perhaps there’s an as yet to be explored dynamic between the characters that will force the great wizard from his hideaway; perhaps in Hamlet saving himself, he can save Shakespeare and win the war against Richard and Lady Macbeth.