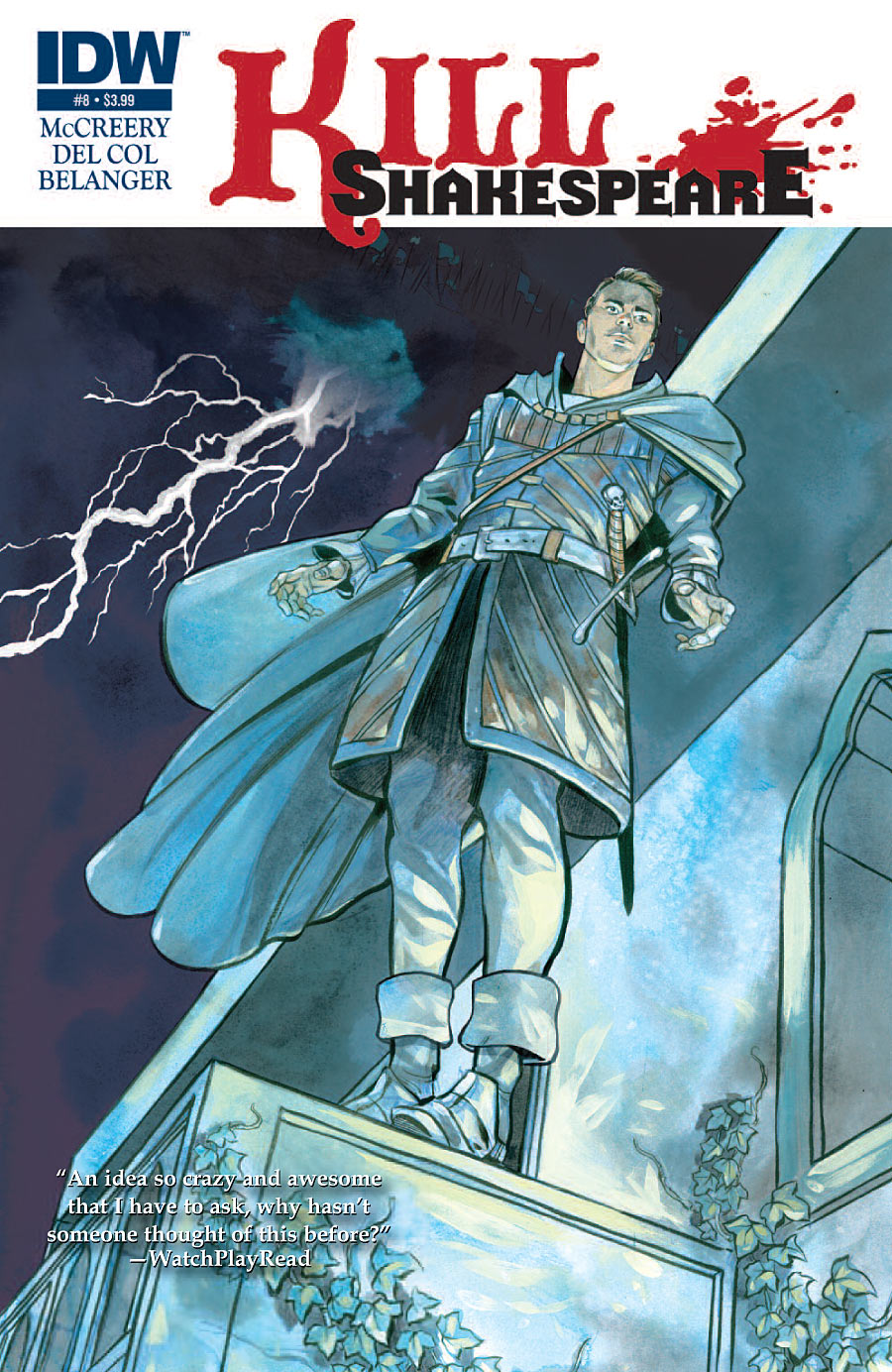 The team behind the critically successful series are back again with the eighth issue of their Shakespearean tale. Just what does the team have in store for us before the holidays? Let’s have a look!

Kill Shakespeare brings together the Bard’s greatest heroes and vilest villains into one organic universe. Here they interact with one another, from old friends and long-lost loves, to sworn enemies and including the most tragic figures. Each has chosen a side, but both have a common goal: to find a reclusive wizard named William Shakespeare. To kill or not to kill, that becomes the question for these characters. 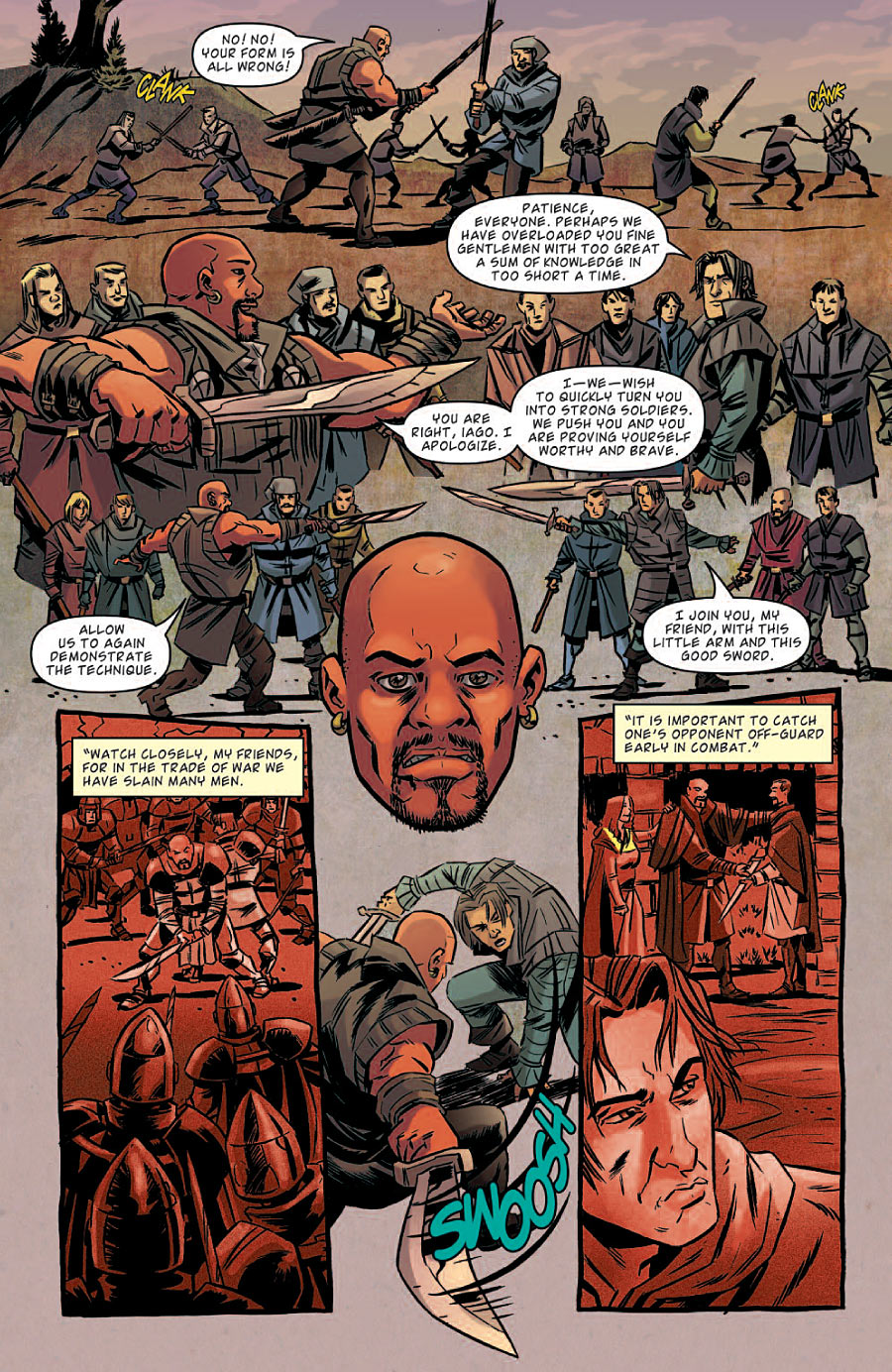 The characters continue to wind down after their great battle with Richard’s men and subsequent encounter with the touring playgroup in the last issue. After a heart to heart moment between Juliet and Hamlet, the Prodigals move out from their camp the next morning. As they leave the town though they’re met by one of their surviving scouts, while the rest were discovered and killed by Richard’s men. Hamlet, Falstaff and Iago decide to leave the group to search for Shakespeare, while the rest of the Prodigals stay behind to train for the forthcoming onslaught from Richard’s men. As night falls, Philip and Lady Macbeth meet in a cemetery to discuss an alliance where it seems Philip is primed to join the ranks of the Lady and become part of her master plan. Elsewhere under the pale moonlight, Hamlet stands atop a balcony and asks his father to appear before him once more. He fails to respond, but Juliet arrives and climbs the lattice-work to speak with him before embracing each other for a long kiss goodnight.  In the morning Lady Macbeth and Phillip assemble their forces alongside their allies while Hamlet, Iago and Falstaff travel into the woods and towards the mountains to find Shakespeare. As they continue along their path, they’re confronted by a group of knights. One of them steps forward after Hamlet refers to himself as the Shadow King. Demanding proof, the knight takes off his helmet to reveal a familiar face. 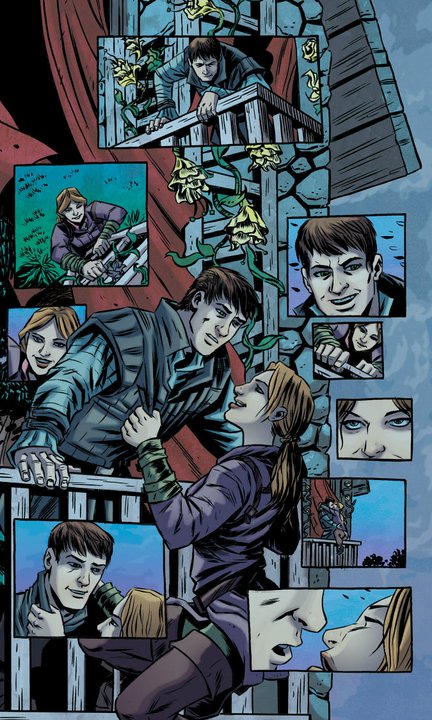 After the rather epic scale of the art in issue seven, Belanger delivers a much more decompressed offering this issue using less grandiose panel layouts. Even still, he avoids a straight-forward design by abstractly angling most of the panels, while drawing a main background with inset panels on other pages. It keeps the pages from being boring simply by stepping away from conventionally squared and altogether uninspiring layouts. It shows Belanger even at this simplistic a level offers a measure of creativity in his work regardless of how scaled back the overall effort is. The decompression period lasts for much of the issue, using the same structural layout in variations from one page to the next, including the final pages. We see shades of his work from issue seven during the inverted re-enactment of the infamous balcony scene from Romeo and Juliet featuring Juliet and Hamlet.  These scenes primarily focus on Juliet climbing the lattice-work to reach Hamlet. Belanger places Juliet at the top of the balcony railing on the cusp of embracing Hamlet. Around the scene are deliberately placed panels that show close-ups of Hamlet and Juliet’s eyes, Juliet climbing the lattice-work, and finally the two in each others’ arms. The final panel shows the two just about to kiss. On the next page, the page pulls us into a close-up to Hamlet and Juliet as they kiss for the first time.  Around them the red curtains of Hamlet’s room flap in the wind as Belanger draws the yellow flowers into the foreground while creating a deep space effect of the starlit sky in the background beyond the two lovers. 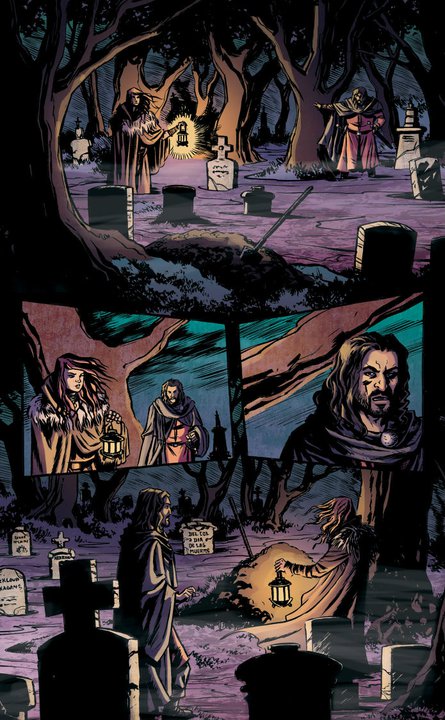 After the dramatic conclusion to issue seven, the Kill Shakespeare team gave us a scaled back offering this go-around. Because of that, the issue does drop off in overall presence as the team prepares for its final push towards the series’ end. Even still, it was an issue no less intriguing than the last. Much of the issue is void of action, but there are several scenes I felt were designed to set up forthcoming battles. Between Othello training the rest of the prodigals and Lady Macbeth moving her plot into its next stage, it’s evident a massive conflict is on the way with the only questions that remain being where the characters’ allegiances will lay.

After the loud silent note the last issue finished on, the issue slowly builds a crescendo into the series’ final leg and these scenes help create that feel. The issue also focuses on two plot developments that are intently connected. First, Del Col and McCreery pay homage to the classic balcony scene from Romeo and Juliet, where Romeo had climbed to Juliet’s balcony to be with her. In this story, the roles are reversed as it’s Juliet who climbs to Hamlet’s balcony to consummate their romance with a passionate kiss. Here their courtship comes to a head and the stage is set for the Shakespearean wrinkle that is the second plot development. The previous issue alluded to a ghost from Juliet’s past that would resurface in issue eight after being absent for the balance of the series. That rang true, and his arrival although expected should throw a monkey wrench into the budding romance between Hamlet and Juliet. What could not have been expected though was the character’s role in the larger story beyond creating a love triangle, as the character additionally functions as one of Shakespeare’s knights presumably to protect him.

The issue as a whole was solid and well written, but greatly toned down after the emotional roller coaster the previous issue took readers on. Now on the cusp of war and the revelation of Shakespeare’s existence and relationship to the characters, the series is primed to end on a high note that still has not let up. Its intrigue and great storytelling combined with well-developed characters and fantastic artwork creates a thoroughly enjoyable comic book experience, and it’s anyone’s guess what the team has planned next.