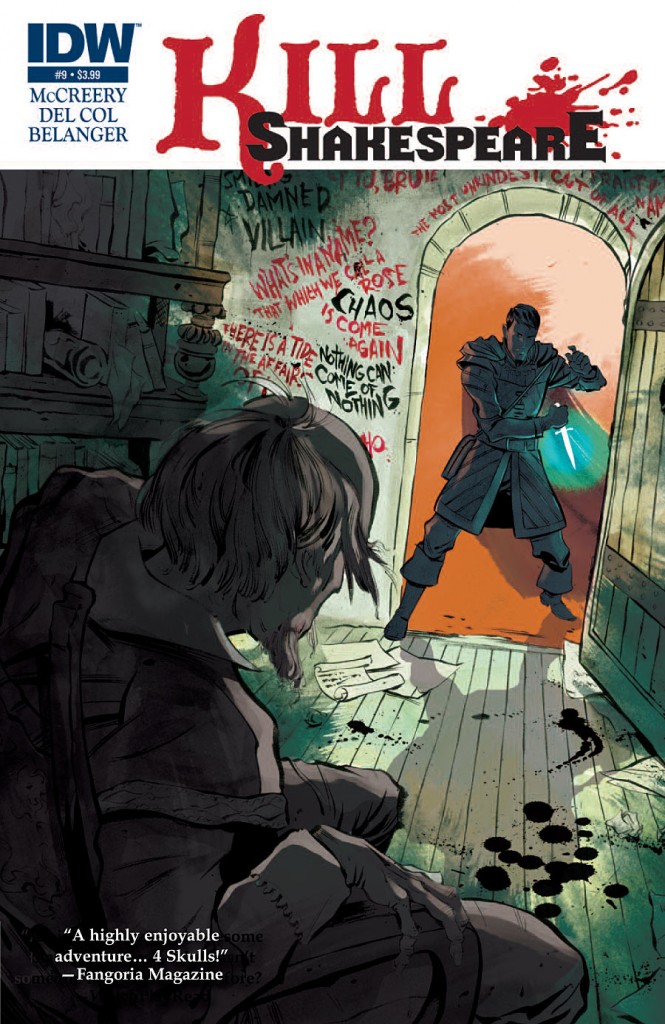 Following the cliffhanger revelation of the last issue, Del Col and McCreery return us to the land of the Bard with issue nine with promises of revealing the reclusive wizard, William Shakespeare. Let’s mosey, shall we?

Kill Shakespeare brings together the Bard’s greatest heroes and vilest villains into one organic universe. Here they interact with one another, from old friends and long-lost loves, to sworn enemies and including the most tragic figures. Each has chosen a side, but both have a common goal: to find a reclusive wizard named William Shakespeare. To kill or not to kill (Will)? That becomes the question for these characters. 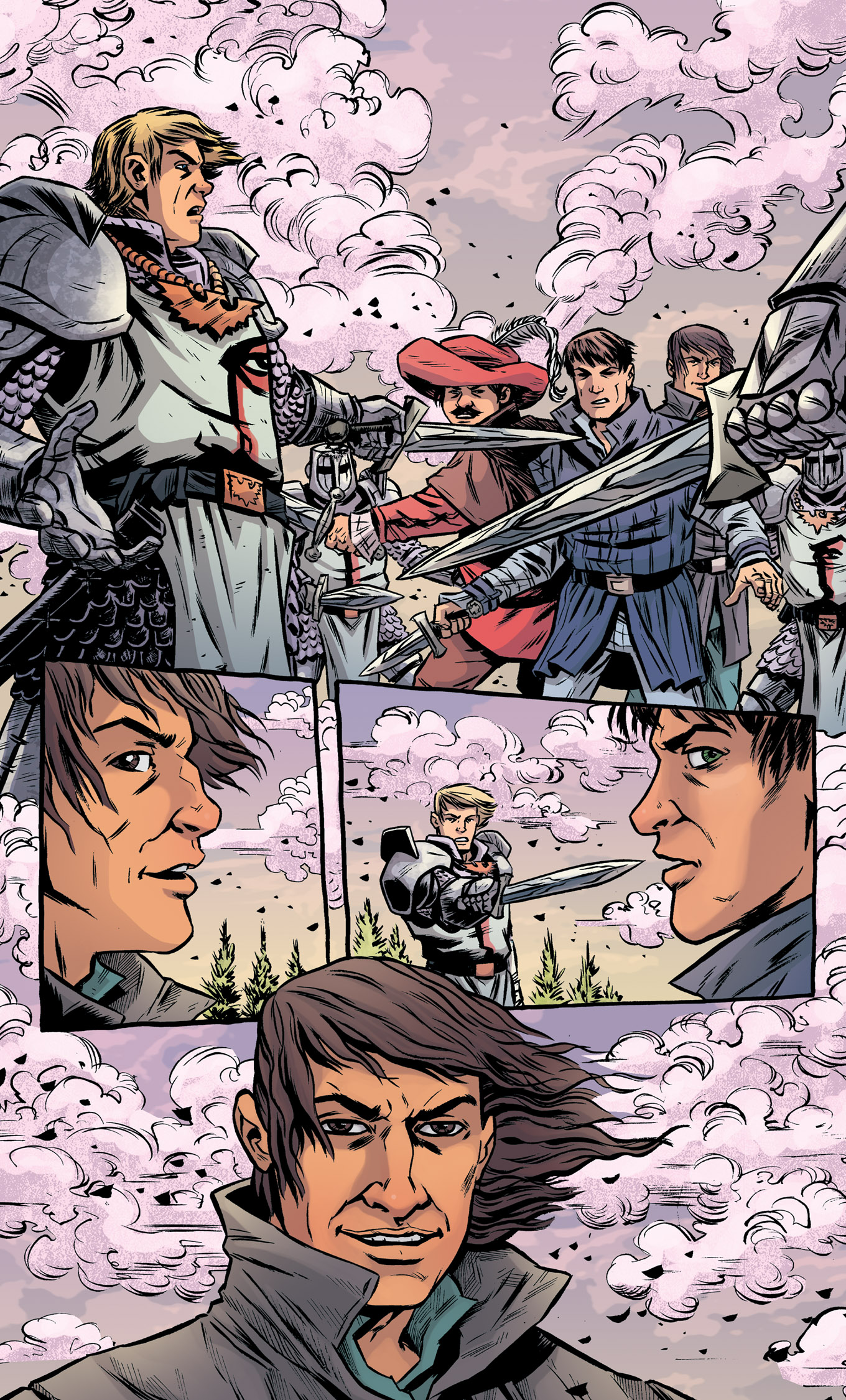 Following the ending of issue eight, we find Romeo and his guardsmen escorting Hamlet, Falstaff and Iago through the woods in search of Shakespeare’s sanctum. We’re briefly enlightened as to how Romeo survived his dance with death, but just as Hamlet and Romeo begin to talk about Juliet the group arrives at Shakespeare’s home, The Globe Woods. Hamlet enters the globe, but after a time is confronted by Puck who tells him that Shakespeare is angry and wishes not to see him. Undeterred, Hamlet continues forward and eventually emerges from the woods to see a rather tidy house in the middle of a field.

Meanwhile, Iago is caught while speaking with Lady Macbeth and is taken back to camp by Falstaff at knife point. He’s interrogated by Romeo and his men, eventually revealing a hard truth to them.

Hamlet continues forward, crossing a moat but not before contemplating the worth of his boots. After a slight problem with the undercurrent, Hamlet pulls ashore and makes his way to Shakespeare’s home. Opening the door, he stumbles in and is greeted by a bottle of wine as it hurls at him. Shakespeare is revealed. To demonstrate he means not to kill Shakespeare, Hamlet throws his dagger down into the floorboards. The two jaw back and forth at each other overlapped by Iago’s narrative as Romeo and his men frantically try to make their way through the woods. As Shakespeare and Hamlet continue on, the dagger begins to stir. Guided by Lady Macbeth’s sorcery, it hurls itself towards Shakespeare as Hamlet pushes him out of the way and puts himself in the line of fire.

Belanger hit his mark again with issue nine. From start to finish he offers fantastic visuals, wasting no time in offering a remarkably well done two-page spread of Hamlet parting the forest through his will alone. He draws the trees with somewhat of a curvature towards the tree canopies to mimic the force enforced upon them, as though someone were physically moving them and bending their branches. Meanwhile along the top and bottom of the pages, Belanger captures each sequence of events rather well from the slightest breeze to a violently authoritative and forceful gust of wind; the reactions on each character’s face are captured from Falstaff’s genuine pleasure at the sight to Iago’s utter disbelief. 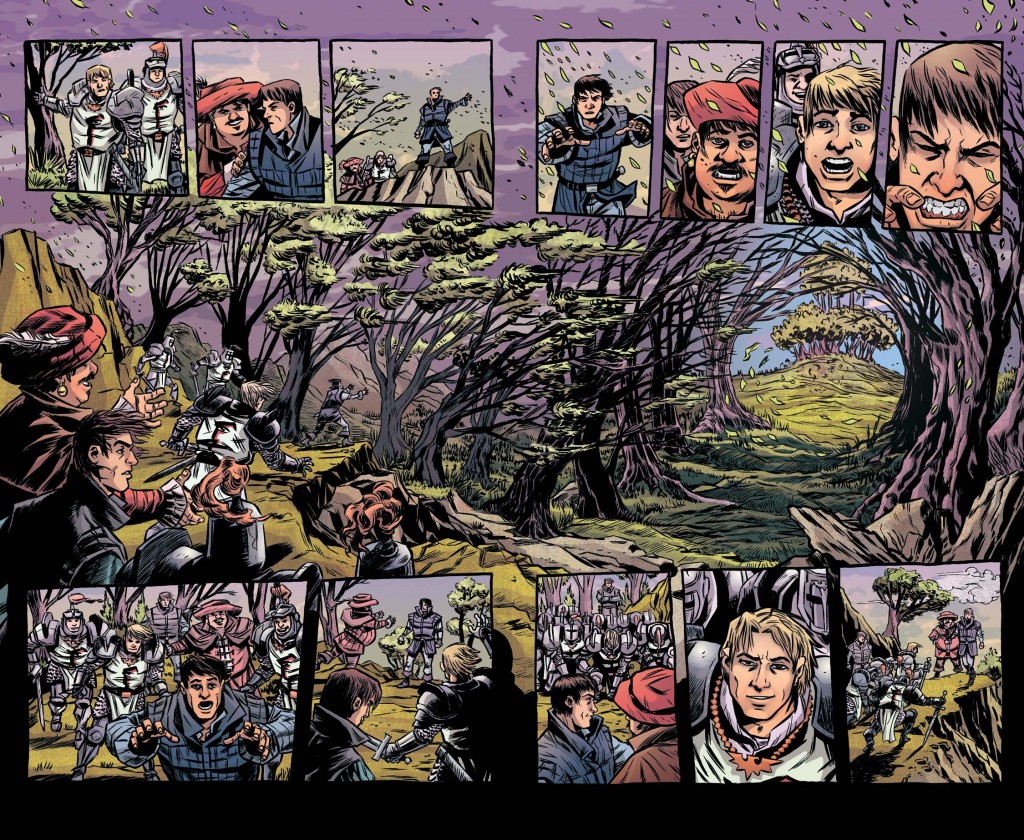 On the following pages Belanger brings the characters into the thick of the forest, ingeniously using tree branches that partially obstruct their path and vision to separate the different panels quite creatively. In another interesting yet similar scene where Iago is shown speaking with Lady Macbeth, Iago drops a ball of fire on the ground that shoots upward to the top of the page, meeting at the top-middle. On either side are separate sequential images of Iago before and after the image of Lady Macbeth appears. As you work down the page, we see the two speaking; the way the initial image of Lady Macbeth is situated, it could perhaps be said we’re looking at her through Iago’s eyes. Belanger’s work on these pages is very intuitive, imaginative, and altogether creative.

Another delightful page sees Hamlet being dragged down into the bed of a moat by Paper-People(?). The panels are cut diagonally from the top right, while your eyes follow each dramatic scene of Hamlet’s submersion from the top-left to the bottom by the Paper-People. Then as you follow from the bottom, we watch Hamlet attempt to resurface. The art settles down a bit from there, but the pages still avoid being dull or boring. When we finally meet Shakespeare, he’s slowly revealed first as a silhouette, then we see his eyes in the reflection of a broken liquor bottle, and then we finally see Shakespeare himself. I really liked this slow revelation of the character’s appearance, combined with his initial speech as a silhouette. Belanger took it home by revealing the character gradually, building some suspense before the final pages. 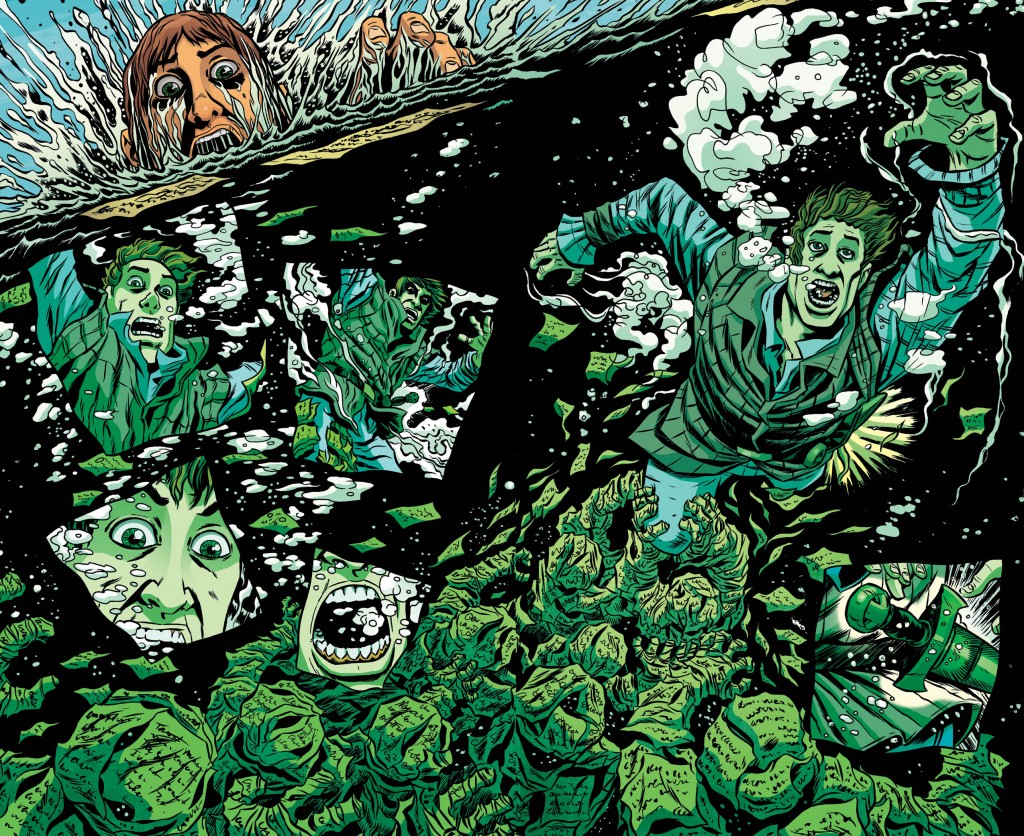 The final pages were nicely executed. Hamlet and Shakespeare are nicely contrasted in their expressions while the dagger hurls through the air. In the first page, Shakespeare is rather stoic about the dagger flying toward him, contrasted by Hamlet’s initial shock. Then on the following page in what seems to be a split second later with very minor nuanced changes in the page, Shakespeare can only slyly grin as Hamlet decisively pushes Shakespeare out of the way, putting himself in its line of fire. The pages say so much about Shakespeare, without doing so much beyond a slight alteration to the character’s expression. It says so much, accomplished by doing so little. It’s simply great art. 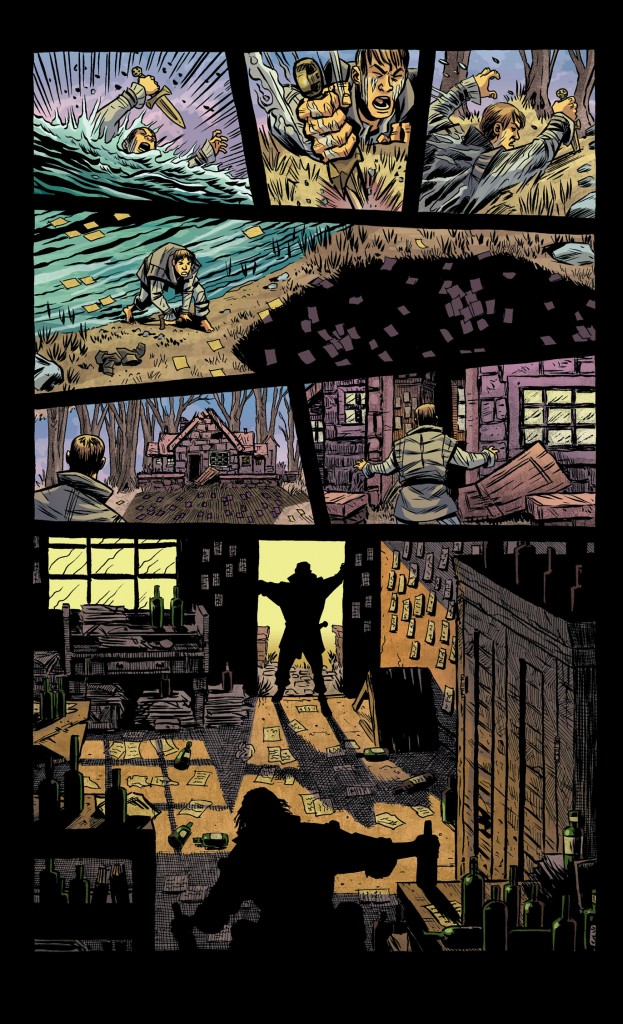 After nine issues, the reclusive one stands revealed. Is he what we more or less should have expected? When I think of Shakespeare I continually picture popularized portraits of the playwright, and the team’s rendition marvelously spat in the face of those conceptions. The revelation of Shakespeare though sets the tone for the final three issues with the huge (horse laden) battle looming, but what his revelation really addresses is a very universal conception we have in terms of idolatry. We hold historical figures (such as people, gods, etc.) in such high regard, often placing them on pedestals they could hardly ever meet the standards of were we to ever actually meet them. In this case, our notions of Shakespeare’s appearance coupled with his near godly status in Del Col and McCreery’s adaptation of the characters are shattered; executed quite well might I add. He’s gruff, rough, brazen and clearly intoxicated. The overall revelation was pulled off masterfully with the team’s combined efforts.

As for the series as a whole. I feel like this was the breakthrough issue for Hamlet. We began to see his heroic potential both as someone who has the ability to turn the tide of the forthcoming battle, as well as someone who is finally completing his hero’s journey towards the person he’s destined to be. In putting himself between the dagger and Shakespeare, I feel like that part of his journey is completed. This is evidenced by Shakespeare’s expression, as though he knew how Hamlet would act. His development as a character over these nine issues has been central and is ultimately a story about his own redemption. The quest itself to either kill or save Shakespeare has served as a measuring stick or subtext to that quest, and in apparently making his choice Hamlet has perhaps saved himself. The question then, is, whose side is Shakespeare on…?

Overall the issue was a great read. Del Col and McCreery’s writing has definitively improved throughout the run and it’s showing in the revelations of this issue and the overall pacing of it. Their scripts feel very detailed, and with Belanger’s artwork, acts as the perfect complement to each other. Together they have created one of the best books in comics, that after nine issues, has not let up in either its quality or presentation.