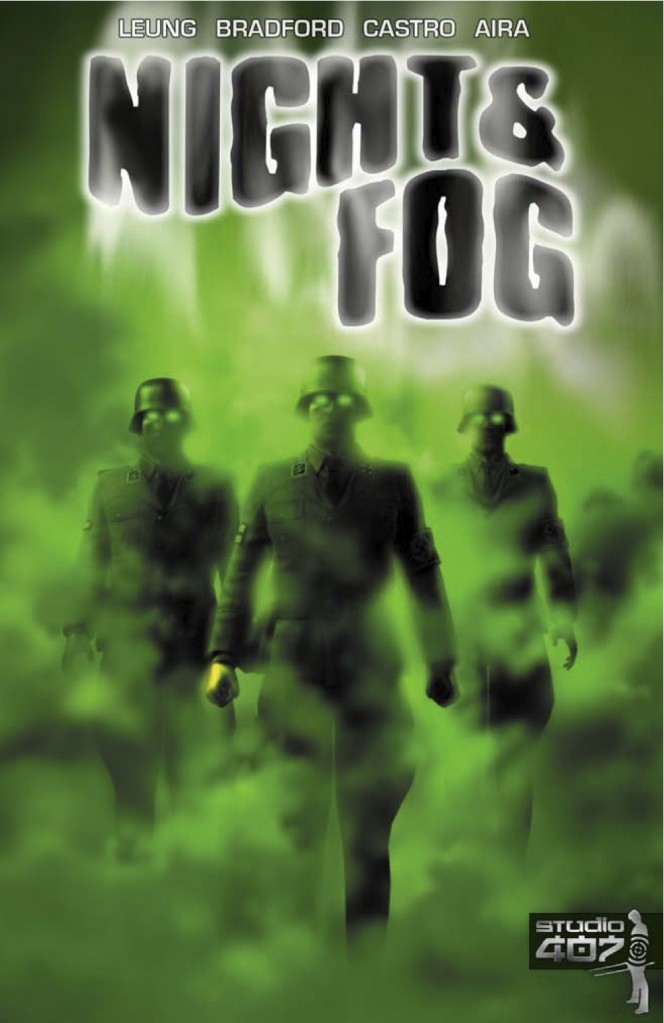 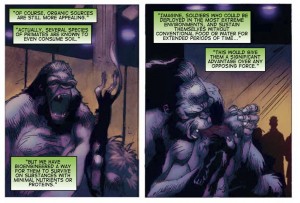 You know what’s a really bad idea? Genetic experiments. You know what’s even worse? When they go bad. Tack on some preserved nazi corpses circa World War Two and highly adaptable mutant super soldiers and anyone would be hard pressed to avoid crying for their mothers. Studio 407 brings us another take on the classic scientific experiments gone wrong story creating a crisis that begs the question, what would happen if Steve Rogers mutated? Here’s a tissue. Feel free to cry.

The story begins recounting the rumoured nazi super soldiers created during the Second World War. They were the product of secret experiments intended to create Ubermensch, the Overman more commonly known as Supermen. These Aryan soldiers functioned with military precision and an operatic brutality leaving no survivors to tell their tales.

This brings us to present day where Dr. Edward Cushing stumbles about his lab amidst a dense mist looking for a colleague. For the time being, he only finds a marginally evolved lemur.

One of the major characters in the story is Lieutenant Nathan Christopher, whom also is Chief of Security. We meet both him and his family, two young children with an affinity for Mickey Mouse pancakes, and their babysitter Jamie. 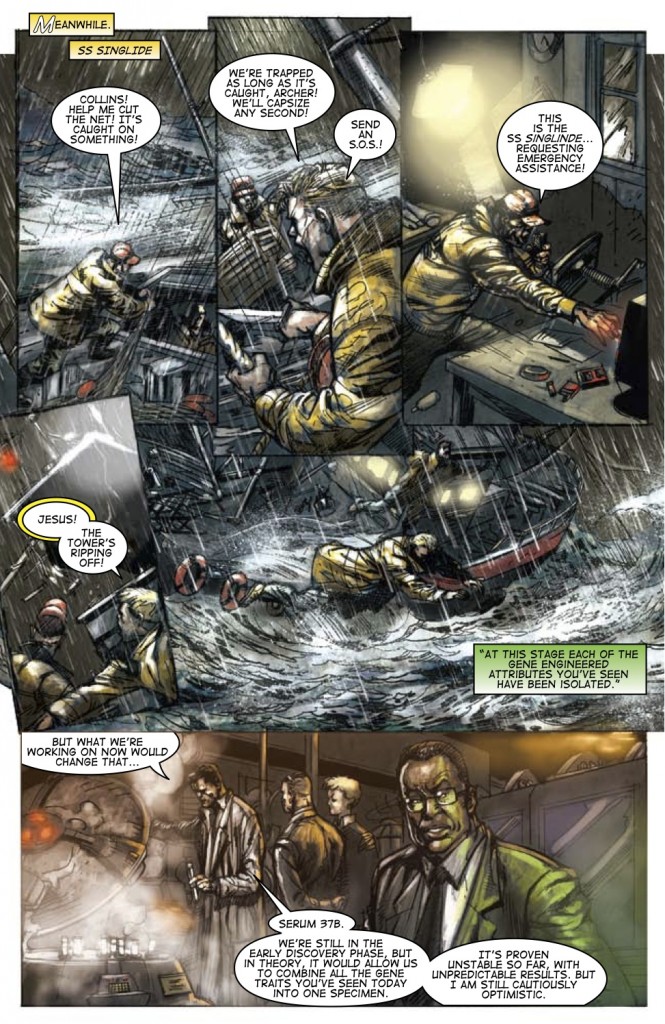 Most of the story takes place in and around a research facility on island in Baddock’s Bay, where the Under Secretary of Defense is visiting the site for an unexpected check on the facility’s experiments. During the demonstration we learn that Dr. Cushing’s been heavily involved in gene experiments. We’re shown a few more experiments, such as a genetically modified ape that can survive entirely on its habitat; including the soil. Another example is the Tiger whose pigment cells have been engineered to enable it to reflect the full spectrum of light, expanding on the abilities of a chameleon. What does that mean? Well, it means the great big, slight vicious predator can cloak itself within the colour spectrum. Another demonstration is offered where a wolf has its tail sheared off, only to regenerate it instantly. With all these experiments going on, what possibly could go wrong?

Well, it just so happens there’s a storm going on. During this storm a group of sailors ventured out into it. Yeah. After being capsized, a rescue helicopter arrives to pull them out. The thing is, there’s that storm going on I had mentioned. With

Lieutenant Christopher aboard, the chopper fires a harpoon into the ship in hopes of rappelling down to rescue the sailors and then extract. Christopher touches down successfully, and secures the sailors, but the cable wraps itself around the helicopter’s rotor and beings to whirl out of control. It crashes into the research facility and causes severe damage to the labs, notably the one containing the serum. The serum vaporizes and becomes airborne, immediately mutating Dr. Young, Cushing’s assistant. The emergency response team on-site reacts to the fire outbreak and try to flush it through the ventilation system. In doing so, the serum becomes fully airborne, creating large problems for Baddock Island’s population. Many of the islands population start to mutate, and the poo hits the fan. It’s around this point where things start to fall a part.

Between the mutated population and the suddenly freely roaming animal test subjects, things go from bad to worse. Casualties begin to mount as Christopher and his companions fall to the mutated super soldiers one by one. Once in a secure location, Christopher devises a plan to escape through the facilities subterranean tunnels. After several close encounters with the mutants as they escape, they arrive inside a remote part of the facility that houses the bodies Nazi super soldiers from the second World War. Meanwhile, Jamie continues to watch out for Lieutentant Christopher’s children, as they hold up inside the basement of the Christopher home. Jamie goes upstairs but realizes very quickly she and the kids aren’t alone in the house.

Jamie is attacked and wounded by a creature, but fights back by sticking a meat cleaver into its neck. Just when things look bleak, the kids arrive with a lighter, an aerosol can and motorized hacksaw to even the odds. After the ordeal, she grabs as many guns and as much ammo as she and the kids can carry to defend themselves. Finally after escaping the facility and dodging the evolving mutated super soldiers (which are basically vampires), Christopher and his team arrive at the Christopher household to find Jamie unconscious on the floor with a dead mutant next to her. Suffering from tremendous blood loss, she undergoes a quick transfusion, during which they try to fortify the house until daylight comes.

Now early morning, the crew prepare to move out and devise a plan to do so safely. The team moves out with Skouras taking point, forgetting some of the properties these soldiers have been endowed with. The volume abruptly ends with an artery gushing experience. 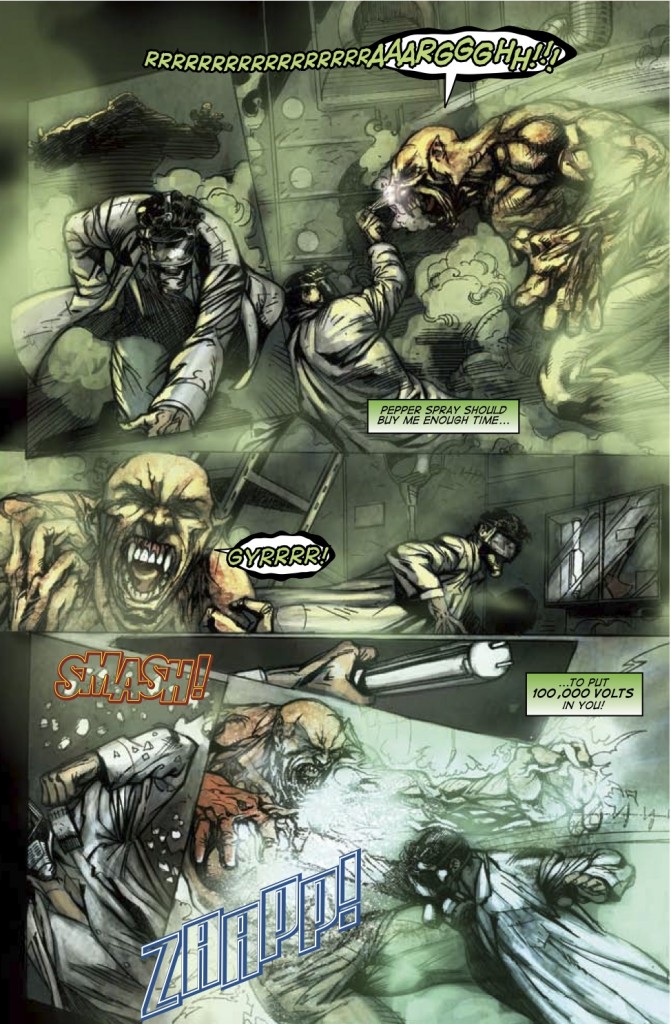 I’ll say this much about art, it’s gruesome. Between the grotesque mutants, the bloody corpses piled one on top of the other, the impalings, the decapitations, the limb severings, the cranial explosions, and any number of random gunshot wounds that cause dismemberment, it’s quite vivid. And no that list was not an exaggeration. The art team captures the animalistic nature of the mutants and their environment quite well. I liked the shading of scenes such as those where Christopher and his

team try to escape the facility through the sub-levels only to be cut off by mutants attacking from beyond the green mists. The shading and lack of visibility of the panels come across nicely here as we see hadows of the team moving about the background as they retreat from the charging mutants. The atmosphere and environments are great.

In contrast to that aspect, there are some wonderful scenes. My favourite (non-horror) scene in the book is the panel early on during the storm, where the helicopter is flying in for a rescue effort. Every piece of the page is fantastic. The lights on the chopper, the crashing, eerily realistic waves crashing, it all comes together to create a fantastic page. I also thought the page where Dr. Young mutated and you’re shown every second of the process were gruesome and altogether pretty cool.

I feel like the art is lacking though with the human characters. The colours don’t do the pencils justice, leaving them dull and almost featureless on the pages. They just feel dull and lifeless. There are exceptions such as when the Under Secretary is scared witless in the beginning of the book when the tiger lunges at him. Here you can actually see him crapping himself, and going through the motions of it. They are rare unfortunately, and most of the human characters are lacking in depth.

It doesn’t amount to much, but the cover and some of the interior art between issues are much more detailed and infinitely more interesting than the art in the book, an example being how Christopher is drawn at the beginning of issue three with the large mutant directly behind him. It’s too bad the rest of the human characters don’t come near that level of detail. 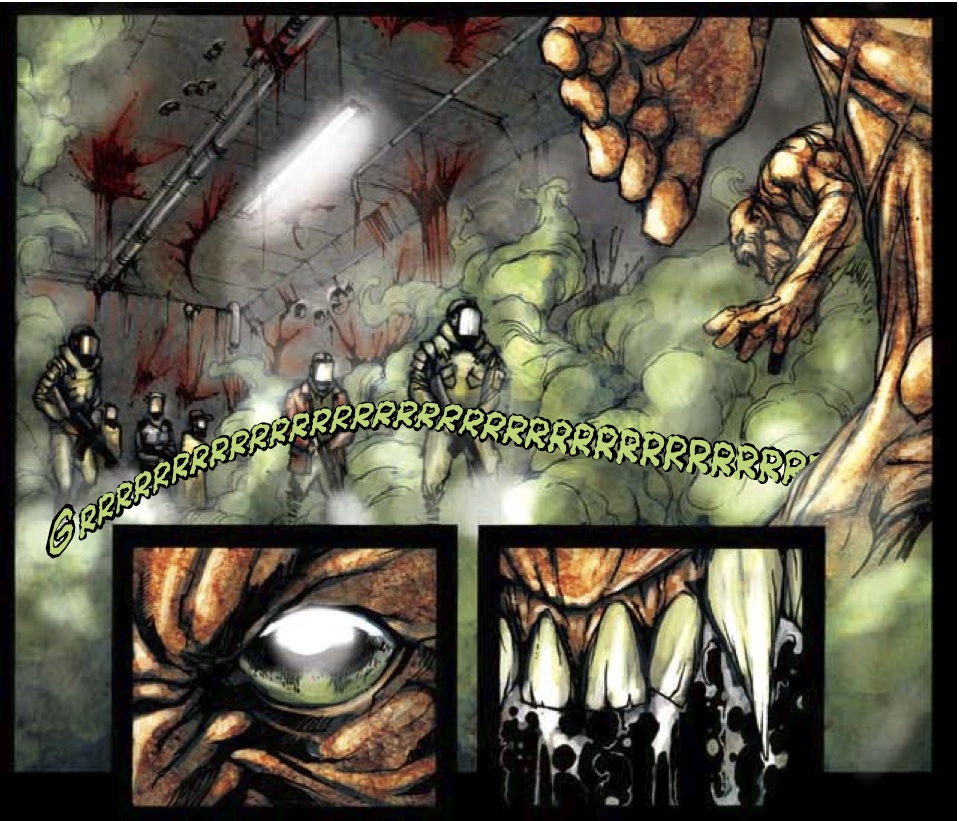 This is straight out of a horror movie, a game too for that matter. Night and Fog feels like equal parts Resident Evil and 28 Days Later. Because of that though, the story doesn’t feel entirely original. The team creates a rather good take on the survival horror genre that Resident Evil made famous and adapts it quite well to the comic book format, but it lacks the originality to really blow you away unless you’ve never been exposed to those pop-culture staples of the horror genre.

The book does a very good job of creating some tense moments, invigorating the book with that classic horror atmosphere of, “this really looks like a bad idea. Why are they doing that?” From there you get that sickening feeling, like watching a car crash as it’s happening. And you can’t pull away, because it’s going to end badly and you want to see what happens. Great examples are the helicopter rescue scene, as well as the volume’s conclusion; in both cases you continually repeat, “don’t do that. No, don’t go out there. No. No. No! Stop!” You get the point. It’s like the classic blonde getting killed almost every time when she’s left alone in a room. It maintains those elements of a good horror experience, but a lot of it is old hat and that keeps it from excelling beyond the constraints of a genre where there’s almost nowhere new to go. It’s not a fault of the writing, it’s just a reality of the genre itself.

Night and Fog is an exploration into our own conceit and arrogance as human beings. We create and maintain practices that we know are dangerous, yet continue them because that’s the exploratory nature of who we are. We’re sick in that regard, perhaps reflected by the mutants portrayed within the pages. Like any good piece of sci-fi horror, the humans aren’t the story. Their creations are. They’re a reflection of the human condition’s arrogance; in the name of progress we are willing to cross lines we shouldn’t perhaps cross and it bites us in the ass every time. Great examples are Terminator, Battlestar Galactica and even 28 Days later. In each case our creations come back on us aggressively one hundred times over and we’re left to scramble for survival. Maybe in the end that’s the kicker of the genre at its peak and this volume by extension. The same stories are repeated because they’re a commentary of our selves and our own repetitious mistakes. Funny how that works, eh?