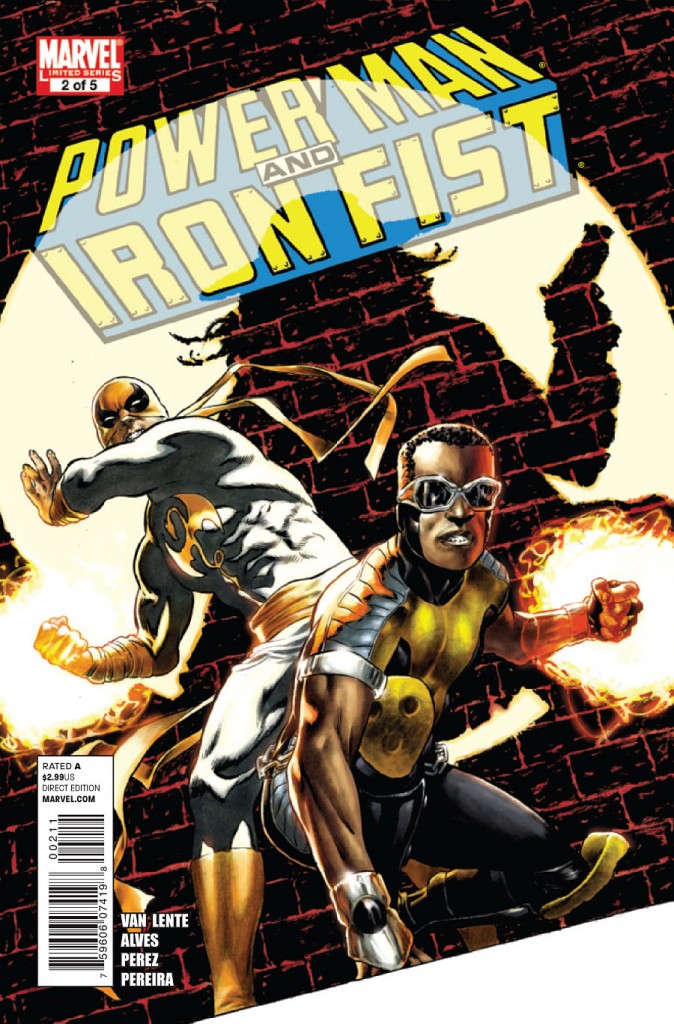 Spiraling out of Shadowland, Iron Fist and the new Power Man found themselves working together to stop the forces of the Hand and save New York City. The Power Man and Iron Fist series continues the relationship between Danny Rand and Victor Alvarez, and now in the second issue of this five issue mini-series we get to see them interact further as master and student. Mosey forth I say!

As a martial arts master and guardian of one of the seven cities, Iron Fist has defended the streets of New York and readily as he would halls of K’un-L’un. Now with a new protegé in his charge, Danny Rand adjusts to trying to refocus a young angry man and channel his immense powers towards a more disciplined existence. 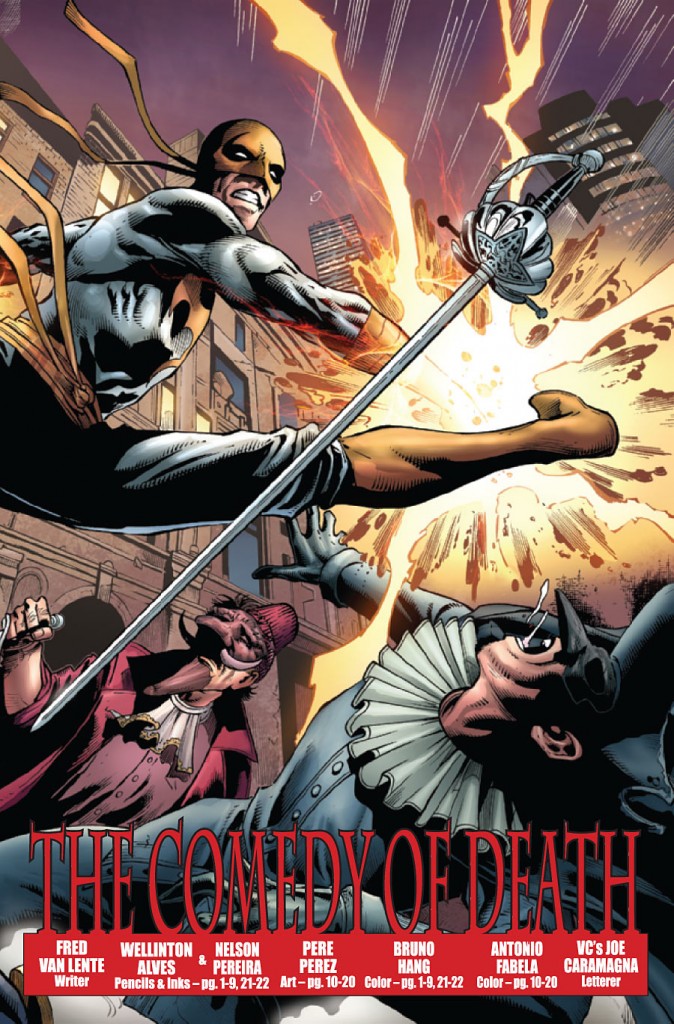 Just when Commedia Dell’Morte have Power Man cornered and at their mercy, Iron Fist leaps into the fray and knocks the group of assassins senseless. Iron Fist and Power Man battle back and forth with the group of assassins until the police arrive on the scene. The assassins disperse, leaving Iron Fist and Power Man alone to answer police questioning. Iron Fist scolds the young Power Man for his mistake before storming off. The two part ways for a time; we follow the young Alvarez to his and his mother’s new home where he decides against confiding in her about his work with Rand as the new Power Man. Meanwhile, Iron Fist runs into an old adversary at an apparent business meeting and they quickly duel. Back on Alvarez’s end of the story, while at school his classmates run through scenes from Shakespeare. The class is paired off, and Victor ends up with a classmate named Tiowa Bryant as his partner. They go off into the cafeteria and rehearse their scene until Bryant’s phone rings with an email update about a secret, silent auction. Bryant shows Victor her phone and he sees a mask that gives him a clue about the assassins’ operations. He runs off and tries to call Iron Fist. Meanwhile, a new player in town apparently has larger plans for Iron Fist than he realizes. 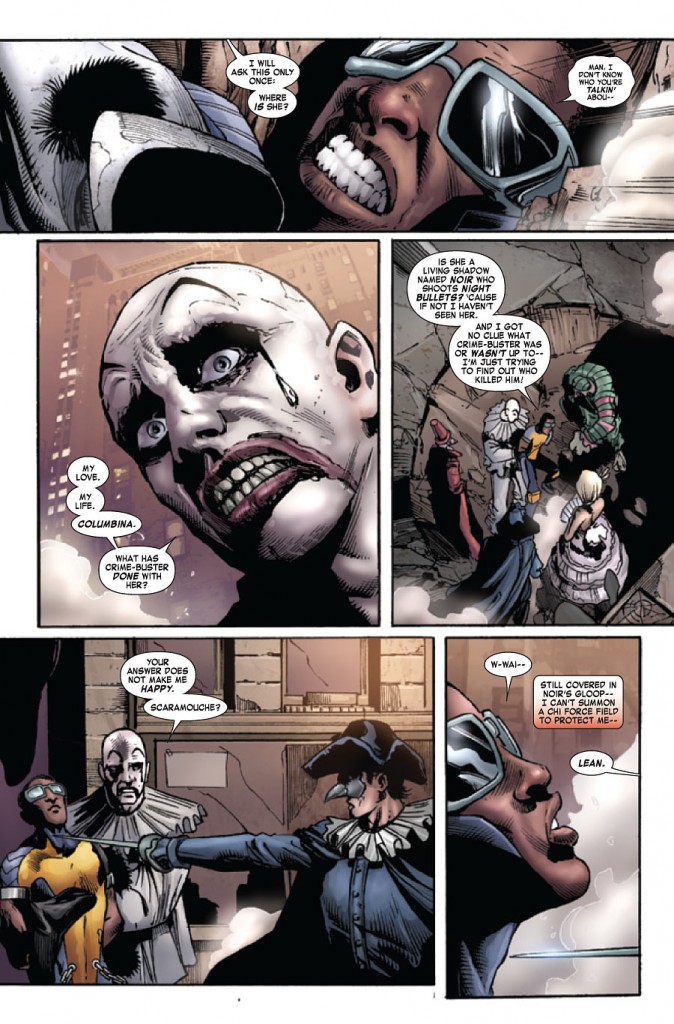 In its entirety the artwork in the issue is good. The first few pages are definitely of higher quality end compared to the remaining pages. The clown’s face is nicely detailed as is the longer horizontal panel featuring Power Man along the top of the first page. Alves and Pereira again come through on the following page as Iron Fist leaps onto the page and split-kicks two assassins. It’s a nice two-page spread that takes advantage of their talents and is nicely coloured by Hang. The great action scenes continue throughout the first nine pages featuring some great martial arts action by Iron Fist. The team again offers some work on the final two pages, but it bears no real worth compared to Alves and Pereira’s work on the first nine. The visual of Pokerface is interesting however. What I really enjoyed about this team’s artwork were its sequential panels. There are several examples throughout the first nine pages. It kicks off almost immediately in the bottom half of the first page where a sword is drawn to Power Man’s throat, where the next panel the point of the sword is shown centimetres from his throat in more of a close-up. Later, an entire page is dedicated to similar action. Power Man is shown punching an assassin into a car. On the following page, Iron Fist is shown throwing an assassin, followed by a frame of the assassin on the brink of being put through a windshield. Both scenes are cut diagonally to add a more dynamic element to the panels.

The remaining artwork is contributed by Pere Perez. I feel like it’s good, but altogether inferior to Alves and 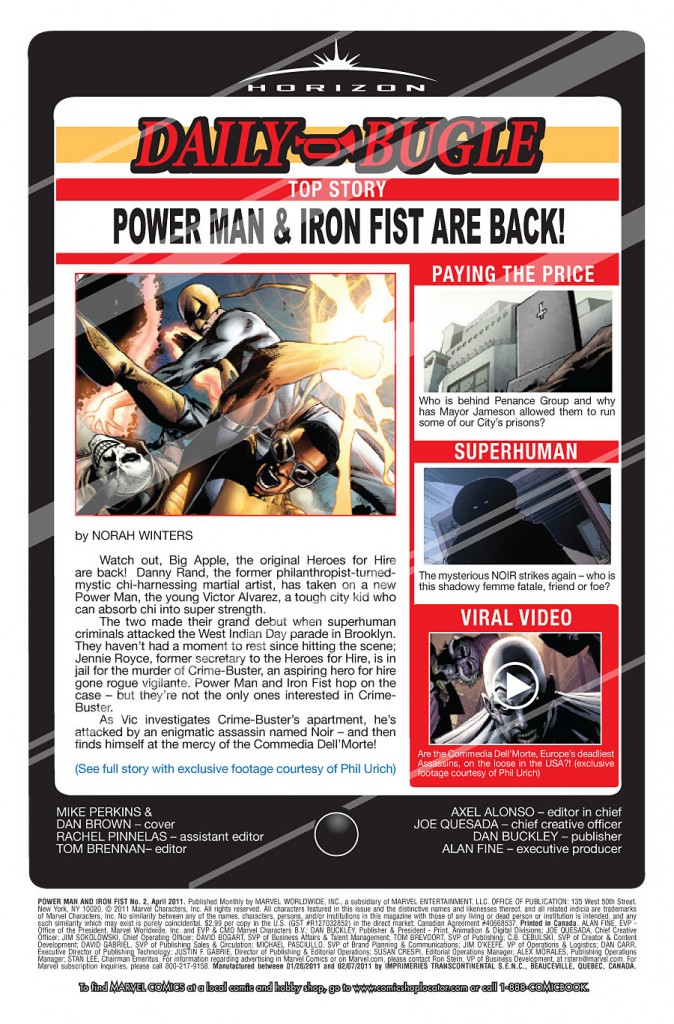 Pereira’s contributions, although there are some nice touches to the art I feel are noteworthy. In fact, the entire sequence between El Aguila and Iron Fist is nicely done with an array of martial arts sequences and acrobatics. Perez tries to create the illusion of a fast paced tussle, but I don’t feel like he quite pulls it off . In two successive panels we see lines indicating motion on the panels, but neither really make sense or sync up with the action in the panels. In the latter example, it doesn’t particularly lead into the next panel. It’s strange since Perez is clearly capable of it, as shown in the panels where Iron Fist leaps over El Aquila, lands, trips him and snatches his sword in four successive panels. Perez is somewhat confusing here, because his panel layout is fairly eclectic from one panel to the next while following the action closely in the next. The remainder of his work is fine, but slowly paced. It’s not helped by Fabela’s dull colouring and strange decisions. In two instances he uses yellow imagery to represent either stages of motion in Iron Fist’s case, or a personal aside where Power Man is concerned. It seems like a good concept, but its universality doesn’t lend itself to two different situations. It’s a nice idea, but Fabela should have chosen two different colours to represent either situation.

After two issues, the latest Power Man and Iron Fist series has continued the storyline that began during the Power Man mini-series set during Shadowland. It places Iron Fist in the position of master to Power Man who reluctantly has allowed himself to be an apprentice/partner to Iron Fist. I don’t feel that after two issues enough has happened in the story to warrant continued reading. This issue introduced another layer of Van Lente’s mystery and larger story, but the larger plot structure feels predictable at this point as we know by the end Power Man will accept Rand as his master and a new team will be established properly where the two come to a point where they can co-exist and function as master and student. This mini-series essentially chronicles the journey to that point, but it’s not a story worth investing money in when the outcome is fairly predictable.

Van Lente and both art teams have put together and executed a good script in terms of the action scenes, giving the principal characters great opportunities to showcase their skills. The actual writing however is less dynamic relative to the art. It’s not a bad book, in fact the writing is solid. Structurally it’s fine. As a reading experience, the potential is there to deviate from the likely conclusion, and for those who enjoy the journey itself it could remain interesting. I feel like the conclusion is fairly well set in stone though, so I’m not sure how much deviation there can be. If you’re enjoying it, continue reading. Otherwise, I’d suggest waiting to pick up the trade when it’s released later in the year if you’re an Iron Fist fan.