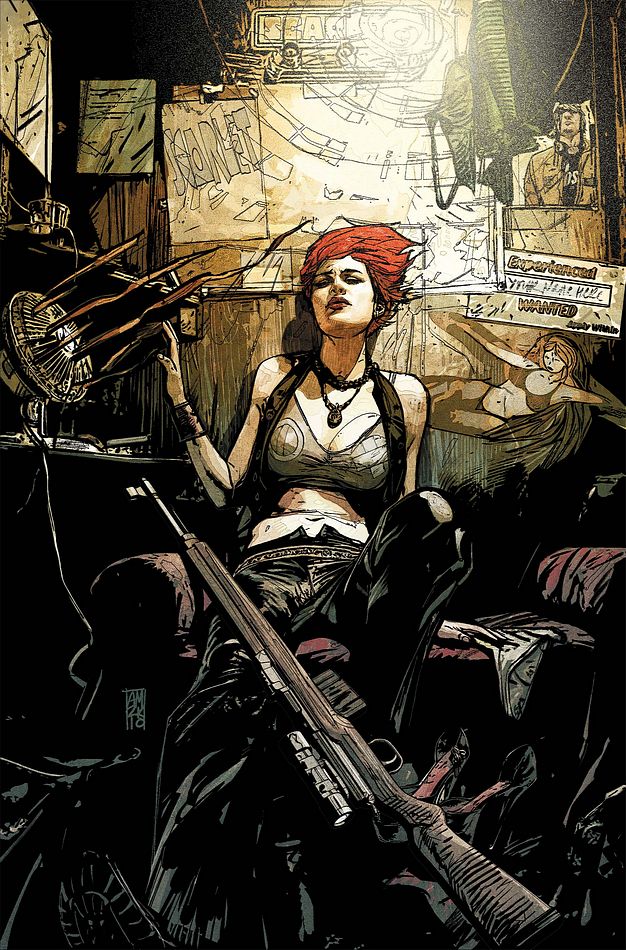 What’s your breaking point? Really, sit back for a moment. Think about it. What would push you beyond the point where you sit comfortably in your chair? At what point do you simply say, enough? Welcome to the world of Scarlet.

With a snap, ggkk! and a fump we’re introduced to Scarlet’s world. Welcome to a world of birth, shitting, fighting, kissing, disappointments, friendships, jobs, relationships, infidelity, fights, sex, “experimentation”, rejection, drinking, good grades, bad grades, profound realizations, true love, happiness,  heartbreak, murdered boyfriends, and corrupt police officers. Does that sound mostly familiar? This is the story of Scarlet, a young woman finding out the hard way that the world is a messy, conflicted wonder. The only question beyond the “why?”, in her words, is “what am I going to do about it?”

This is the story of someone whose life was destroyed by violence and corruption, and how she chose to fight back.

A couple biking in a park; the cutest couple in the world meeting friends. They hopped off their bikes as though they were getting ice cream, suddenly having a marriage ceremony in the middle of a Portland park. They were happy, in love. That’s worth fighting for, that’s what we have to fight for in Scarlet’s eyes. Everyone should have the possibility of that. Everyone. Shouldn’t they? 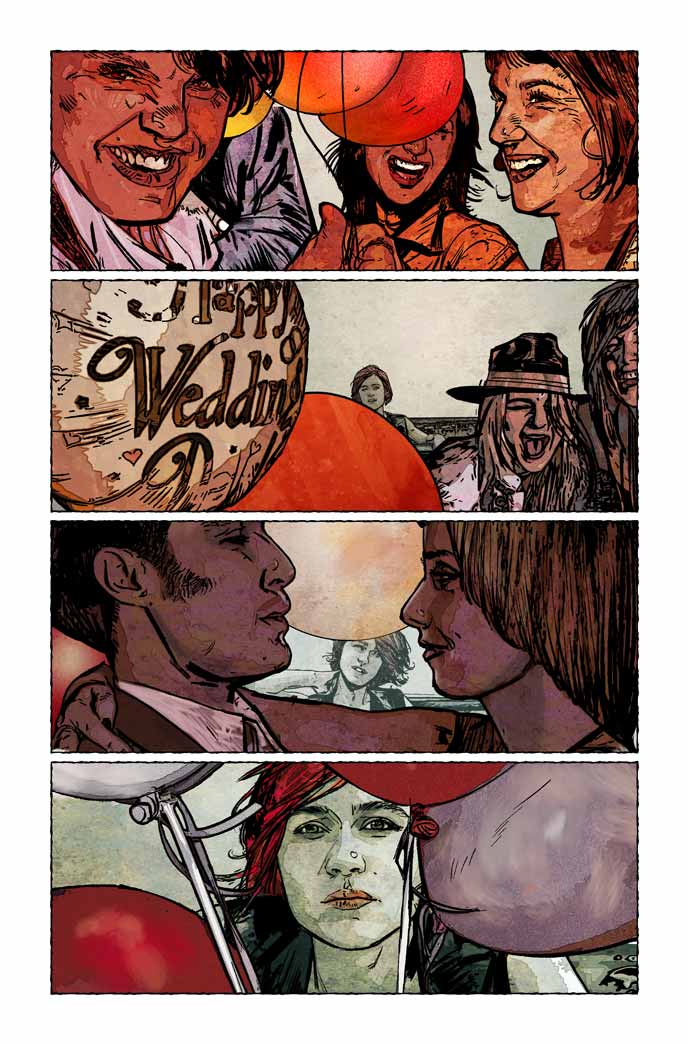 Scarlet’s observations are interrupted by the cops, who’ve been looking for someone with her description since she killed the corrupt police officer responsible for killing her boyfriend. They all give chase, ensuing throughout the crowded streets. Eventually escaping, she runs to the home of her boyfriend’s best friend. Brandon and Scarlet re-aquaint, and Scarlet shows him what she’s been up to. Ultimately surprised, Brandon is lost for words until Scarlet asks him to help her. He can only reply with, “What comes next?”

That’s answered quickly, as we find officer Dunes dead on the street. He was the one responsible for the murder of her boyfriend. Officers arrive on the scene, quickly followed by the police chief who we find out is the uncle of Dunes. A voice comes onto their communication devices, and speaks directly to the chief. From an unknown location, Scarlet admits to murdering the officer for two reasons: revenge, and because the blatant abuse of power by society’s authorities will no longer be tolerated. She makes it clear though that this message isn’t for him, rather, for everyone else who’s listening. Everyone who’s watching. A gunshot blasts out as another officer falls to the ground, while we leave our heroine for another issue; standing high atop a building, sniper rifle in hand.

I’ve always had this strange fascination with Maleev’s artwork. On one hand, there are times when its abstract colouring throws you off a bit, because it’s unusual. It’s very dark, while the colouring seems almost too grainy. It feels like it shouldn’t work, but it does. His characters are as emotive as ever, and you’re clearly able to distinguish between “sad Scarlet”, “contemplative Scarlet”, and “happy Scarlet”. Simplistic observations aside, the point is Maleev’s art pays very close attention to character detail, and that’s always been a strong point with his work. 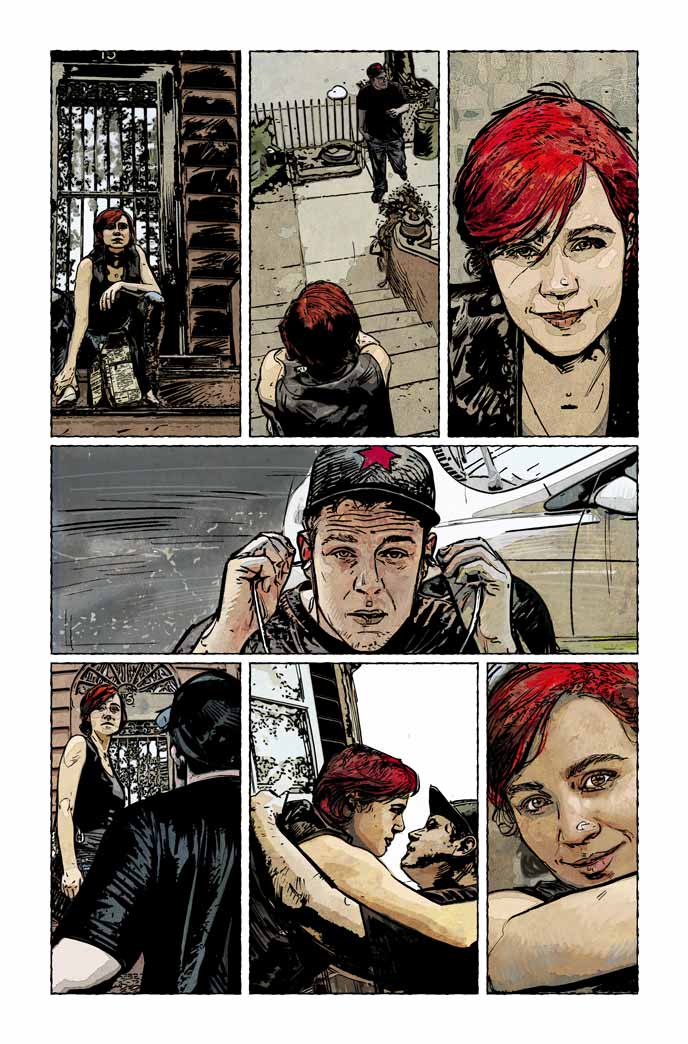 What I’ve never really gotten though were his backgrounds. They aren’t spectacular, and they don’t really stand out. They often fade or blur in this issue as the scenes pull away from the characters. They’re almost indistinguishable really, removing most detail from the background and placing emphasis at the fore where the characters are. That’s the genius behind it really. This book is very much character driven, and to place that much emphasis on the highly detailed characters adds to the overall story and really adds to its communication.

I’ve held off on writing a Scarlet review specifically because I wanted to see how it developed over the first few issues. Initially I was pretty impressed with the first issue, but wasn’t comfortable heaping so much praise onto a new book and a new character so soon. With three solid issues under its belt though, I can honestly say this is one of my favourite books on the stands right now.

Scarlet’s world is brutal and heartbreaking, yet beautiful. What’s interesting about this book is how the story is told. Her story is communicated almost entirely as a soliloquy. She’s telling you, the reader, her story. It doesn’t feel as though Bendis is writing to you, rather than his character is talking to you. That’s all too uncommon, and the level of engagement between the reader and the character is high here.

Only three issues in, the story is methodically paced to establish a contextual gleam into Scarlet’s life. If you’re expecting an action packed story, this will not be the book for you. It’s very character driven, similar to a Joss Whedon creation. It will not blow you away unless you’ve invested yourself in the characters and their story. It’s essential to understand the journey, and for that, the story needs a solid foundational understanding. Without that there’s no context, much less a point.

We learn through Scarlet’s dialogue what brought her to the point where she’s faced with killing a police officer out of desperation. There are layers to this 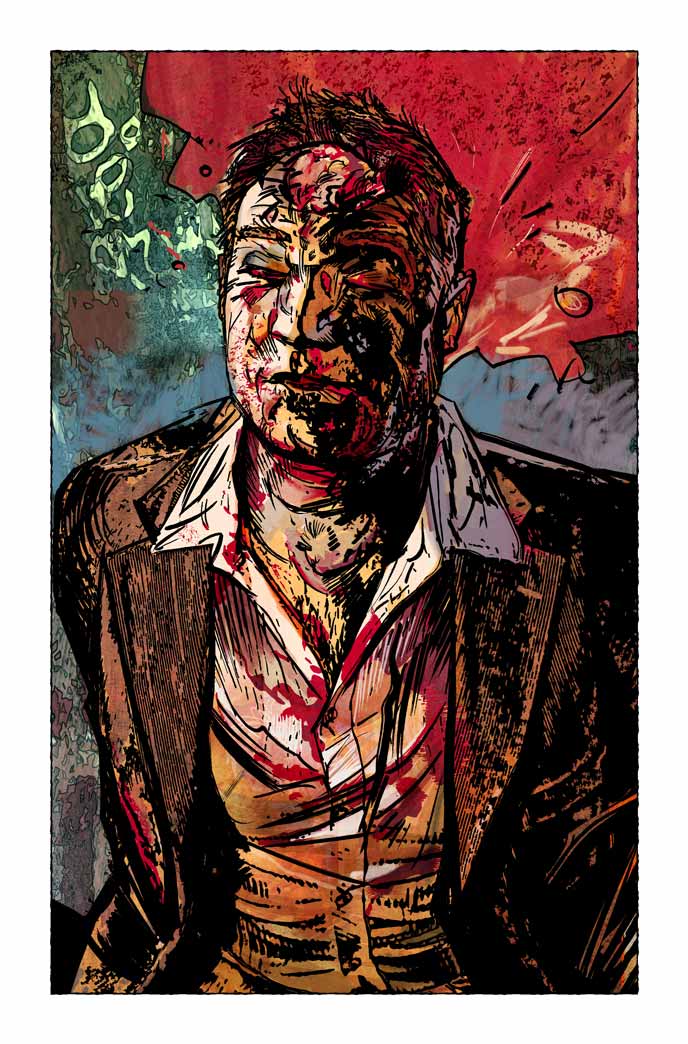 story, in Scarlet’s words. Context is everything both here and in life, so you can’t really jump into someone’s story without understanding what brought them from “point A” to “point q”.

What we do understand are two things. First, life is beautiful and there’s plenty worth smiling about and being content with. Secondly, the world is a colossal mess, and more, we don’t really know or ask “why?”. Perhaps we don’t even answer that question. As the first issue points to, that’s not really even enough; it acts more as easing towards feeling better about the mere attempt to understand “why?”.

The book asks a very simple, universally applicable question in response: What are you going to do about it? What’s more is that this story embraces the repercussions of the decisions we make. It may end poorly, it may end well. In the end, the choice is what matters. Her world is ultimately violent, cruel, and corrupt; her boyfriend was killed by a crooked officer with a drug addiction, who then shot her. He nearly killed her in fact. I suppose the question then is, when faced with those circumstances, what would you do?

I’ve been hard on Bendis lately, being rather discontented with his Avengers work. I’ve felt it lacking and uninteresting for the better part of the last two years. With Scarlet though, we see Bendis return to his Daredevil form. Along with his old partner, together they turn in a great piece of work. Scarlet cuts to the heart of our own psychology and asks what would you do in her situation? How would you react? It’s a deep, engaging story which I would suggest reading the first issue of at the very least.