While not a runaway smash hit for Image like Walking Dead, Chew or Morning Glories, Cowboy Ninja Viking has had some steady success in the comic book world and is the next comic property to be adapted for the movies, courtesy of Disney of all people. Deadline has the exclusive with the guys behind Zombieland and the Deadpool script, Paul Wernick and Rhett Reese, are stated to be doing the adaptation. For those of you who haven’t read the series, it’s about an intelligence agent with the multiple personalities of…well a cowboy, ninja and Viking that gains their skill sets when he takes on their personalities and they can sort of talk to them. He’s part of an agency that recruits people with MPD and they mold the personalities to do the dirty works. 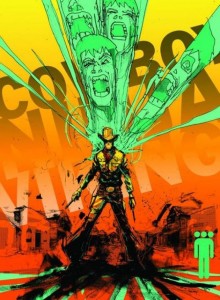 I’m pretty on the fence for this adaptation. I loved Zombieland and I’ve been hearing very good things about the leaked Deadpool script. I’m just leery of how they will handle the adaptation. Will they play it off as a serious series or try to riff it like Deadpool who has the voices in his head going on as well? Hell, just the title, Cowboy Ninja Viking makes me think that the audience at large will see it as something like Snakes on a Plane or Hobo with a Shotgun, parody films of sorts. Plus, given the lukewarm reception of wildly popular Scott Pilgrim, it makes me wonder how this will fare at the box office? Overly pessimistic I know, but that might be because I’m not overly attached to the source material. The story’s pretty interesting but the art was very sketchy with sort of an Ashley Wood feel to it that turned me off. I always like to see comic book movies being made even if they aren’t my cup of tea. Hopefully this will surpass my expectations.