The moviefone blog has taken a stroll over to the Green Lantern film location and come back with some gems of information on the film. So far they’ve given us 5 things to look forward to with promises of even more to come! Take the jump or just read on down for the information. 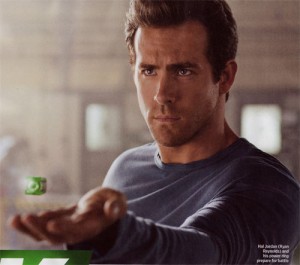 1.Reynolds’ character, Hal, has to go to boot camp to learn how to become a Green Lantern.
Oscar-winning production designer Grant Major (‘The Lord of the Rings’) told us, “Hal has a steep learning curve as a new Green Lantern. He has to learn to use the power and at first he’s not very good, like someone picking up a guitar for the first time.” Also, the ring has a limited operational life. The various Lanterns have to visit a “pocket dimension,” for recharging every 24 hours.

Ok, the limited operational life is comics canon as the ring can simply run out of power, but visiting a pocket dimension to recharge the ring? Is this person kidding? Maybe he’s misunderstanding something? He’s frigging Green LANTERN! Otherwise what would the purpose of the oath be? The super secret words needed to gain access to the clubhouse dimension? The training montage that we will get with Reynolds learning ropes will be cool though.

2. The ring’s “construct” can be anything Hal imagines.
The ring’s power manifests itself as a physical projection, e.g, a “construct,” based on Hal’s imagination. “We didn’t want the design to be very mechanical, like ‘Transformers’ or ‘Iron Man,’ where he only has one or two tools,” Major said. “The constructs have a ‘business end,’ but are not as solid throughout. They stay green, although they look somewhat like an X-ray.” Because Hal’s a newbie with this ring thing, his initial constructs when fighting mostly take the form of ordinary weapons, like guns and knives.

Standard stuff any comic fan knows, but I guess new viewers won’t really have any what Green Lanterns powers are. 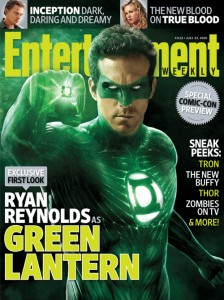 3. “This movie couldn’t have been done a few years ago.”
Reynolds told us that the visual effects are so advanced, “it couldn’t have been done even two years ago.” Costume designer Ngila Dickson (another ‘Lord of the Rings’ Oscar winner) told us about the decision to go virtual with the Green Lantern costume. “It’s a VFX costume design, partly because it’s generated by the ring’s power. Also because [each suit] is individual rather than a uniform,” depending on who’s wearing it. (The other Lanterns come in a mind-blowing range of shapes, sizes and colors.)

Eh, if you can do Iron Man, I am pretty sure you could do this Green Lantern costume. Every time a new blockbuster comes out they say this. 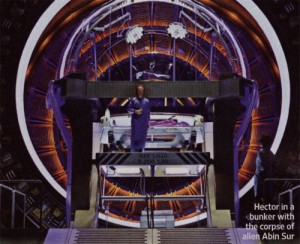 4. The voices of the purely CGI characters haven’t yet been cast.
At the time of our set visit, no voice casting had been done for the CGI-only characters, like fish-chicken-esque alien Tomar Re and enormous, troll-like Kilowag, who acts as Hal’s drill instructor during his training. We were treated to a previz (animated storyboards) with a test reel of Tomar Re using a line of dialog by Anthony Hopkins from ‘The Mask of Zorro,’ about the training circle. “We’d love to get Hopkins,” Major said, but he’s already playing Odin in another upcoming super-hero flick ‘Thor.’

Don’t get a bunch of well-known actors to do the voice actors, grab real voice actors from animated shows like the Justice League, Simpsons or Family Guy to do the voices. A lot of real film actors can’t disguise their voices well enough or have the right range to do justice to their onscreen counterparts to make them seem like real aliens. Changes are if I hear Hopkins’ voice on Green Lantern, I am going to immediately think of Hannibal Lector.

5. Shooting in New Orleans was steamy.
Reynolds, who was on his last day of filming the day we visited, said he was looking forward to taking a break from the intense heat. “It’s like we’re filming inside Dick Cheney,” he joked. That didn’t stop co-star Peter Sarsgaard from indulging his new obsession: jogging. Producer Donald De Line told us, “Peter is very physical as an actor. He gets completely immersed in the role. He got very thin for this. He likes to go jogging, in those barefoot shoes, even in the New Orleans heat. They had to persuade him not to jog as much as he was getting too thin.”