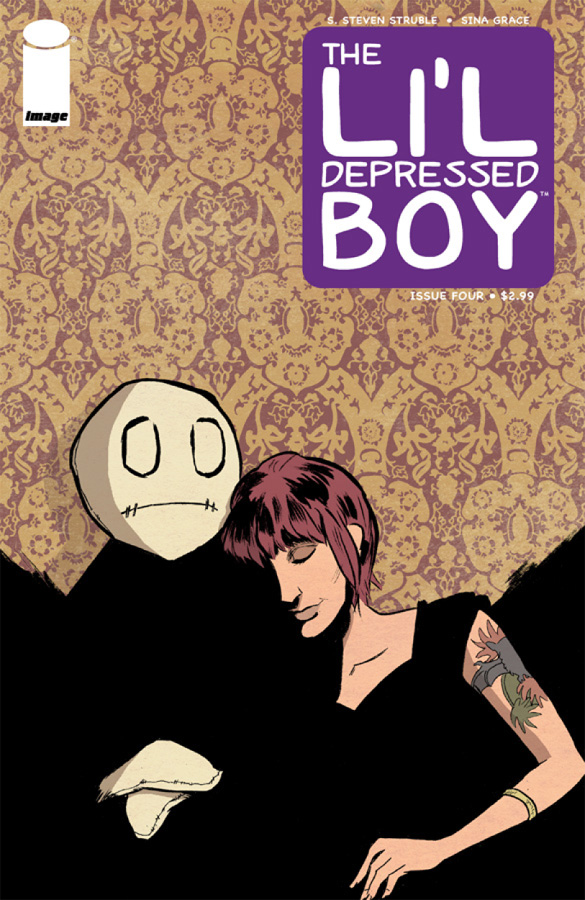 Fairly often it seems some books fly too far under the radar to be noticed. In the last week I stumbled onto such a book. The Li’l Depressed Boy is a story about a boy who’s alone within himself, penned by S. Steven Struble. After getting caught up on the previous three issues, I took a look at issue four. What were my thoughts? Forward!

Li’l Depressed Boy (LDB) is lonely. Routinely retreating behind the walls of his mind and home, into television, books, video games and self-pity, LDB wants more. He doesn’t want to hold onto the instinct to give up, to find a place to hide and to keep himself safe through anti-social behaviour. The Li’l Depressed Boy is a story about a guy who wants to step outside and find something to live for. That’s when he meets Jazz, the girl of his dreams. They go out on a couple of dates, and eventually she invites him to her birthday party where he also meets Jet. The party gets a little noisy though and the police arrive. 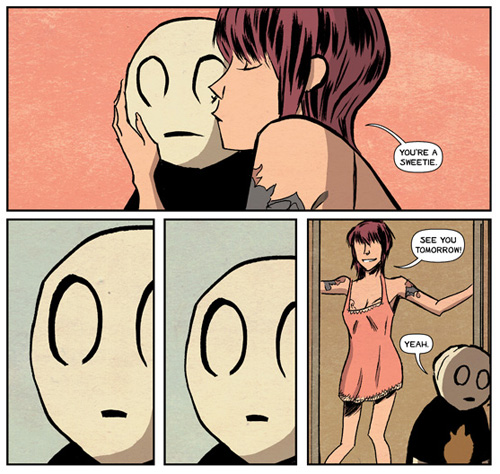 Staying behind after Jazz’s birthday bash, LDB helps her clean-up the huge mess left by the hastily departed guests. After the job is done, Jazz gives a surprised LDB a kiss on the cheek and tells him she’ll see him tomorrow. A shivering LDB begins to walk home, but smiles once he realizes that Jazz wants to hang out with him again. The next day LDB shows up at Jazz’s apartment ready to hangout. Jet is sitting on the couch playing video games and invites LDB to join in. After their session, LDB invites Jet to come out to lunch with he and Jazz. The three sit for a while in the restaurant until Jet has to jet for work, but not before he thanks LDB for buying him lunch.

Later they meet up for Laser Tag and crush some teenagers. Afterward Jazz and LDB get in her car and just start driving, picking up some food and gas along the way. As they’re driving he and Jazz make plans to go on a picnic. She tells him he’s cute and tells him to close his eyes. She hands him the present he had given her and tells him he forgot it at her place. As she hands it to him Jazz also asks if she can ask him a personal question. She asks if it’s wrong she feels bad about having a rich boyfriend. LDB is about to reply that he’s not rich, but Jazz interrupts him and says, “Not you. Silly. Jet.” A dejected LDB walks home clutching Jazz’s present, throwing it on the floor and smashing it when he gets there. He cleans up the mess and throws the turntable in the trash. 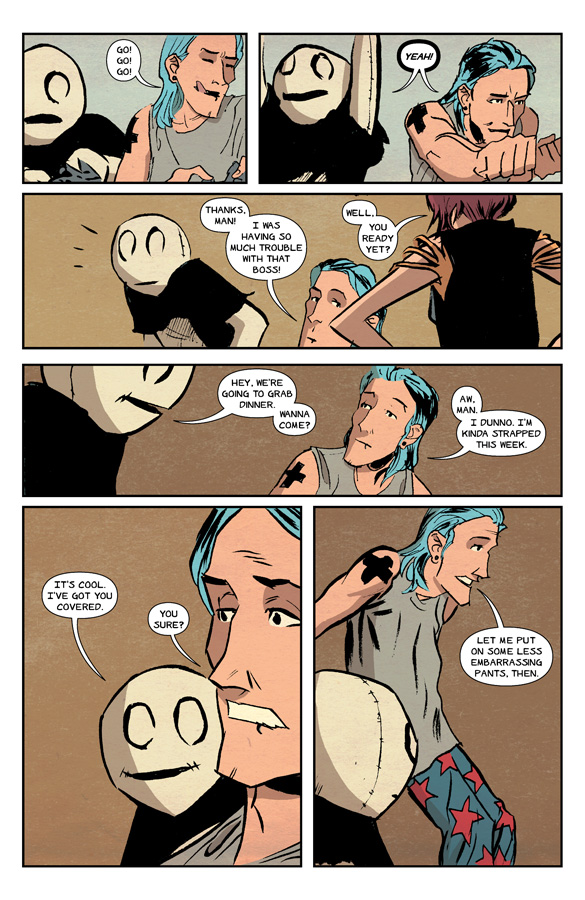 There are comics out there that are better penciled than this book. It’s nothing spectacular on the surface and I suppose I could easily write it off as bland and unimpressive. To do that though is to write off all the little artistic nuances Grace puts together. These nuances help the artwork complement the story and add to Struble’s plot.

The most obvious piece of artwork that sticks out once you read the series is how LDB is drawn relative to the other characters. Each other person is drawn as an actual human being; they have strong facial features, hair, their own style and personalities. LDB on the other hand is typically drawn wearing a t-shirt and jeans, while his actual composition resembles more of a featureless rag doll with stitching and without fingers or hair. He’s discernible only as a person in the loose sense by his mouth and eyes. Even here Grace shines with simplistic and nuanced facial shifts to help the nearly featureless LDB emote infinitely better than any other character in the series. Its beautiful simplicity conveys the thoughts and emotions resoundingly with simple movements in his eyes and mouth which scream the emotional extremes he feels ranging from happiness and contentment to absolute despair and sadness. It’s simple, but effective as a storytelling device.

What I also thought was nice about the artwork were the silent pages and panels which told the story far beyond Struble’s dialogue. There’s a page where Jazz and LDB go into a junkyard and enthusiastically spray paint their names on abandoned cars. The most emotionally wrenching work is saved for the end when Jazz tells him she has a boyfriend. The final panel on that page focuses on a shocked LDB with a blank word bubble beside him. It represents Jazz’s speech, but the blankness itself is indicative that LDB instantly retreats back into himself and tunes out everything around him. The following pages are completely silent. There is a page with three panels where LDB sadly walks home surrounded by the perpetual darkness of his mind. Once home, he angrily smashes the turntable and stomps it into pieces; a later page shows the aftermath with LDB standing in the dark looking at the broken player. The issue ends on a final silent note with the player in the garbage and LDB presumably in his room listening to music by himself. All of these elements come together to help tell Struble’s sweet, but sad story. 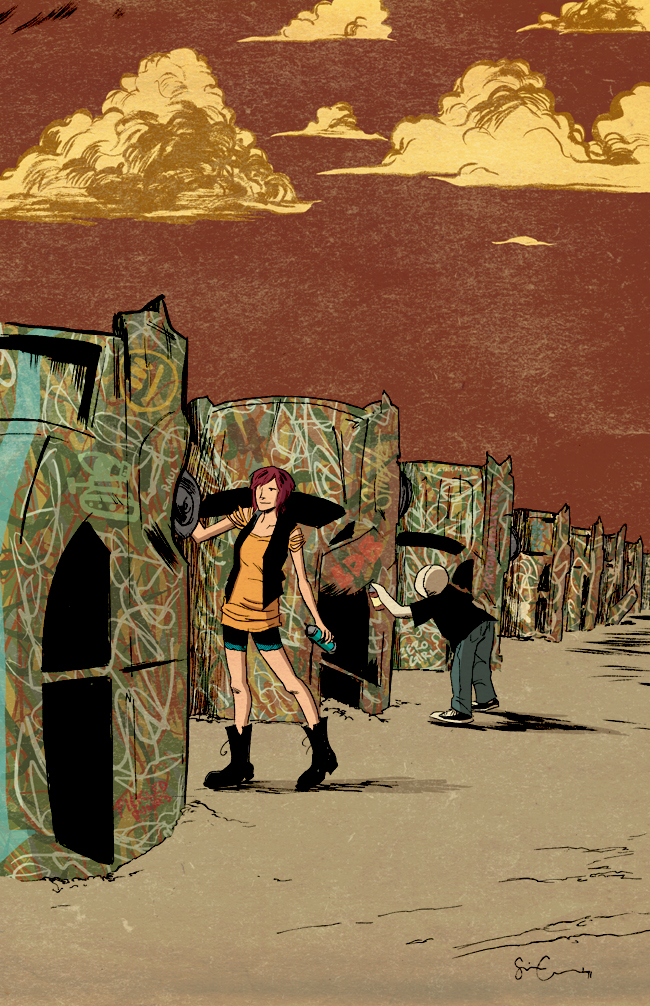 This was a very simple and straight forward read, but also a strongly developed story about a young man who is very reserved and lives a self-contained existence in his own mind and the hobbies he uses to distract himself. Yet, he wants more and ventured out to find love once he meets a girl. The first three issues tell a sweet story of the blossoming relationship between Jazz and LDB, but as issue four reveals it was never what it seemed and LDB is left emotionally crushed in the aftermath. The writing and artwork tell a complete story that captures the emotional range of the main character. What we see is the rise and fall of finding and losing love, left crushed when the reality destroys the fantasy he constructed in his mind. LDB is a remarkable story, simple in its aim and direction, but simultaneously deep, sweet, heart-warming, tragic and sad. We sympathize with the character because at one point or another, we were LDB. This is a nice little story that makes me glad I read comics. It’s simply one of those books.