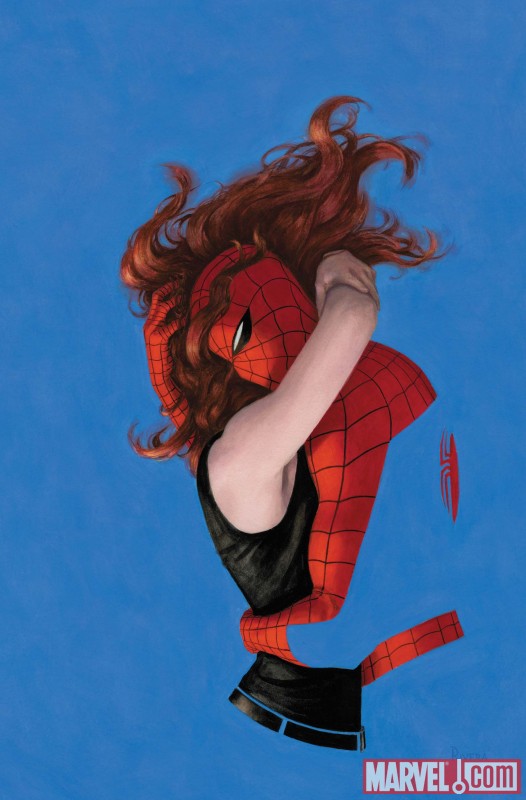 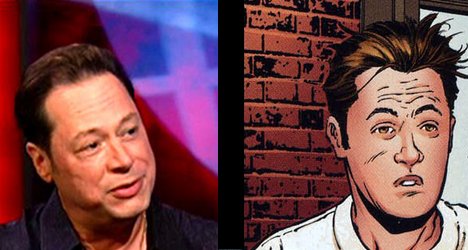 All Peter and Mary-Jane wanted was to save Aunt May. Laying in a hospital bed after catching a bullet meant for Peter, The Parkers frantically searched for a way to save May’s life. Eventually with all other avenues exhausted, Peter and Mary-Jane go to the demon Mephisto and make a deal with him. Mephisto offered to save May’s life on the condition that Peter and MJ give him their marriage, as though it never happened. Throw in the added sweetening to the pot where Peter’s revealed identity is stricken from the memories of the Marvel universe and suddenly nearly 20 years of continuity were erased. Unsurprisingly many disagreed with the events of One More Day, including the book’s co-writer at the time J. Michael Straczynski. Now three years later, Quesada returns to Amazing Spider-man to revisit One More Day, framing some moments in time for the readers still questioning the editorial decision.

In a flash it’s as though they never married. In the wake of One More Day and the Brand New Day continuity that followed, Peter and Mary Jane grapple with the recent events of their lives and the awkwardness that followed their wreck of a wedding day. Now trying to at least be friends, One Moment In Time(OMIT) focuses on rebuilding their relationship as they look back on the events of the past few years of their lives as they try to make sense of it all.

After the events of the previous two issues which explained what MJ said to Mephisto, the nature of their deal, what happened on Peter and MJ’s wedding day and how Peter saved Aunt May in the Brand New Day continuity, this issue resumes MJ and Peter’s conversation. Here Peter tells MJ what the doctor in the hospital told him after Peter resuscitated his aunt. Attempting to explain the events of how a nearly deceased woman was miraculously revitalized, the doctor told him it was love that saved her. The doctor tells him to go home to get some rest, but Peter refuses and stays by his aunt’s bed side. Meanwhile a shady looking nurse gets up from her chair and leaves the reception desk.

The nurse walks away and enters a hallway, speaking to the Kingpin as he sits in his prison cell. She had been updating him on the condition of Aunt May the entire time, including her miraculous recovery. The Kingpin then calls an associate and tells him, “it’s time”. In the next few pages, Mary Jane speaks to her aunt Anna. They talk about the trying times they’ve been through since May was wounded. As it turns out though, the associate Kingpin had called had been sent to MJ’s aunt’s house to actually kill her and eventually the rest of MJ’s family. The associate attacks MJ, but she breaks free and he gives chase. 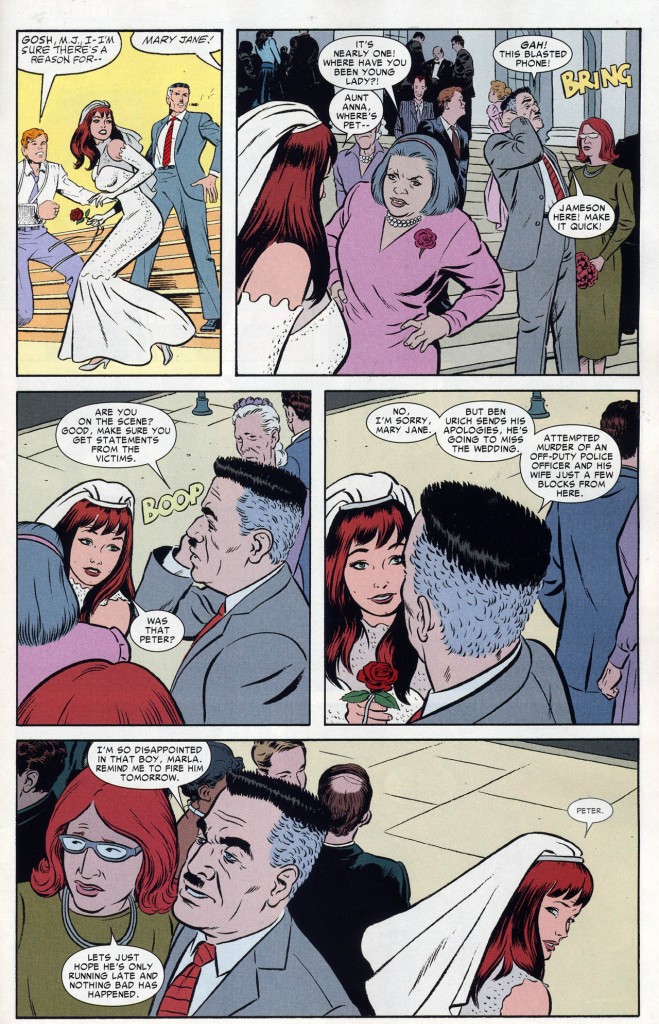 Chasing her throughout the neighbourhood, the Kingpin’s associate finally catches up to her despite putting up both a tremendous fight and his voice a few octaves with a swift kick to lower extremities. Just as he prepares to shoot her, Spidey swoops in and makes the save. He pulls off the associate’s luchadore mask he had been using as a disguise, and it’s revealed that he is the same man that Spidey had webbed to a lamppost a couple of issues back. Police sirens sound and because he’s still a government fugitive, he grabs MJ and takes off. Peter takes MJ to Dr. Strange where he heals her wounds. Peter again requests his help in another matter, asking him to erase the memories of all who knew his identity so that his family could never again be targeted. The issue ends with Peter looking at MJ one last time before telling Dr. Strange he’s sure about this. The final page shows Strange speaking to both Iron Man and Mr. Fantastic about Peter’s request.

For the most part the art left much to be desired. The majority of the book is drawn and coloured by Paolo Rivera. As with the previous issues, Rivera is responsible for the flashback pages which compose the majority of the book. These pages make up all but two pages of the book’s art, and all of it feels very dull and bland. Rivera uses duller tones to illustrate his pencils, and while it works on some pages, the majority of the work just feels lifeless and uninteresting. What I think he does do well though are his transitions between panels. It feels very organic in its presentation.

Some examples include Peter trying to get the doctor at the hospital to watch Aunt May’s room, his refusal, which leads to panels where Peter reveals his costume underneath his shirt, and the doctor’s immediate reaction. Another example is the entire scene leading up to MJ’s rescue where the scenes minutely transition from the chase, her stumbling and then tripping over a trash can, her on the ground and then a close up of her face as she slowly raises her head from the concrete. This is followed by Spidey’s arrival where he kicks the associate off MJ, and then grabs him. Split between two panels are two houses. Here Rivera draws Spidey throwing him with ease between the two brick walls, followed by Spidey leaping on top of him while still against the wall. These scenes are well drawn and Rivera deserves credit for his attention to detail in the latter regard, but overall the dull colouring throughout his contributions hurt the work. 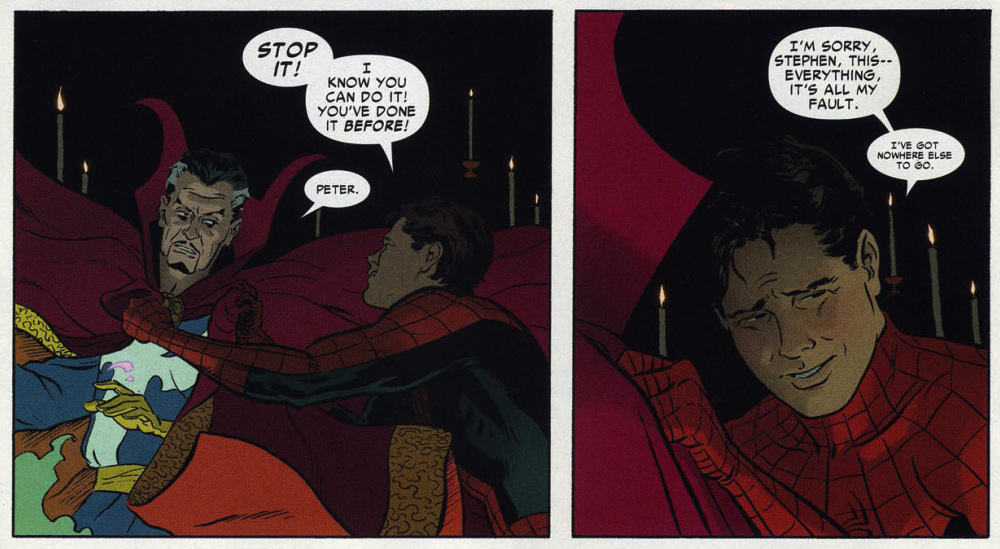 Surprisingly Quesada’s two pages set in present day were quite nicely drawn, and I’m not normally a fan of his art save for the odd instance. The pencils capture much more emotion than Rivera’s work, such as MJ’s single tear as she stares out Peter’s apartment window. Some good scenes that build upon their natural relationship are offered, including a playful scene at the end where she throws a dishtowel at him, continuing a similar sentiment from scene where they sat on the couch in the previous issue. The colours are quite vibrant here compared to Rivera’s. Even still, I feel like Quesada’s characters are too large, at least larger than they need to be. They aren’t so bad here, but they still feel a little bulky, something I’ve noticed in this work and past works such as his run with Kevin Smith on Daredevil.

After the One More Day debacle I pledged never to read Spider-Man again, and I wasn’t alone in my distaste for the story Mr. Queseda editorially mandated. It just so happened that Quesada’s decision as editor-in-chief at Marvel was to editorially annul the Peter Parker and Mary Jane marriage for his own reasons pretty much because he could. Yes, I’m willing to call a spade a spade here. Suffice to say I dropped the comic because Quesada essentially deleted 20 years of Spider-Man continuity.

Considering the criticisms heaped on One More Day and the subsequent Brand New Day continuity, it’s easy to feel some reservation about the intent of this story. Now three years after the fact, Joe Quesada returns to the title to complete his story, and to help fill in the blanks for readers still upset about the decision. It’s hard to say with any certainty whether this story was intended to be written from the outset as Quesada says, or if it was driven by the negative fan response to the conclusion of One More Day. 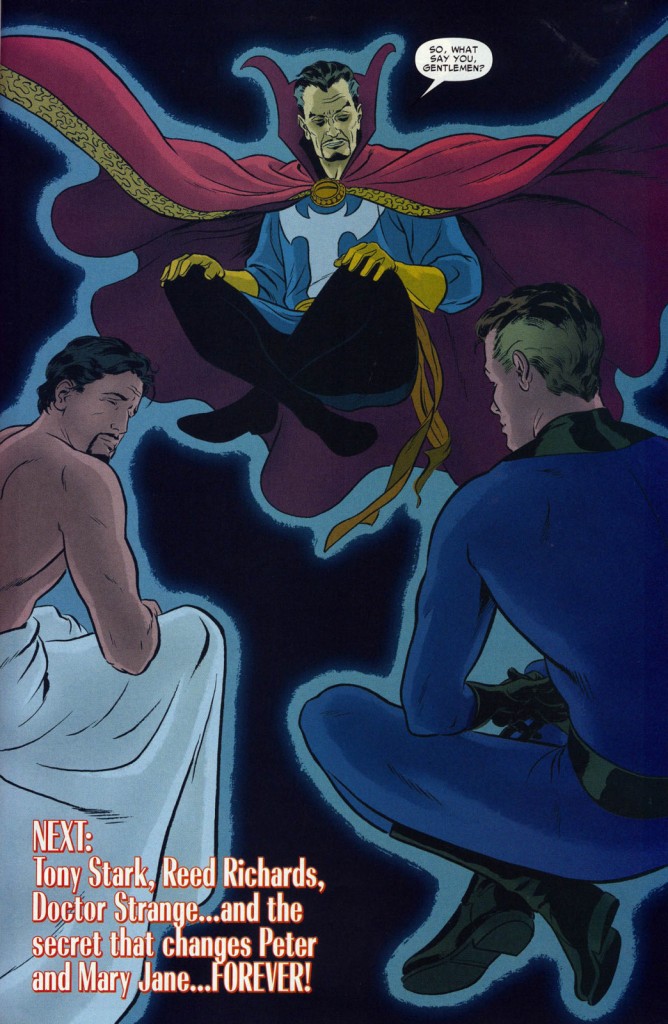 One Moment In Time places the focus on reestablishing the relationship between Mary Jane and Peter within the new continuity. This is accomplished by filling in the gaps for readers between the events that lead into their deal with Mephisto to save Aunt May’s life, preceded by the explanation of why they were never married. This is of course the infamous retcon. I do enjoy the very conversational aspect of the issues. They basically sit Mary Jane and Peter down together alone in his apartment and they talk about everything that led to their drifting apart. They’re done in a way though where the emotional connection the two are known for is apparent, while also adding a touch of playfulness and sincerity to their conversations. The book goes a long way towards reestablishing the important roles they play in each other’s lives and just how important they are to each other. Their scenes are filled with emotional tension, from MJ’s tears to Peter’s butt kicking antics as he swoops in to save her. What makes these two click is all there.

Looking at the entire ensemble, the One More Day/One Moment In Time story is an analysis of love, specifically that of these two characters. If you look at what they were willing to do for each other, what they did for Aunt May, and ultimately what Peter sacrificed to keep them all safe; it’s a testament to the strength of loving relationships and the emotional tethers that really define human relations. It magnifies how far we’ll go to protect or watch over those closest to us, or even in simplest terms, to keep them safe. Those themes are clear and evident throughout the larger story, and the doctor in the hospital in the issue summed it up quite poignantly. It was love that saved Aunt May in his eyes. It was love in a more abstract way that broke Peter and MJ’s marriage up, but in the sense that both were trying to protect the other. That’s really the punch-line in all this; the crux of the story. As an over-arching story, it’s pretty good. This is especially true when we consider the possibility that MJ remembers their marriage; it being her cross to bear alone.

With that said though, I have to question the timing. Despite giving due credit to Mr. Quesada for building on One More Day, the book feels very reactionary and forced. It’s as though he’s trying to justify or salvage his own editorial decision to the fans like myself who criticized the original story three years ago. Treated on its own merits, the book succeeds. However, it does not erase the mistake made in One More Day, nor the string of strange Spider-man decisions in other books, such as revealing his identity again in the pages of New Avengers. Regardless I’m willing to see how this plays out.

Now three parts into this leg of the story, it’ll be interesting to see how it concludes. Whether this story arc salvages the Spider-Man reading experience or not remains to be seen. Depending on the next issue, it may very well be something of a brand new day for readers, or something we omit entirely.