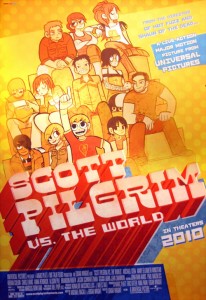 I had the great pleasure to attend an advance screening of the Scott Pilgrim movie and I have to say that it was bloody amazing. It will blow away your expectations whether or not you’re a fan of the comic. I’ve got so much to say about the movie and I am sure there’s a boatload you want to know so I’m just going to regurgitate it all in short ordered bursts before I go into lengthy stuff. So yeah, SUPER HUGE SPOILERS AHEAD

Stuff from the books that were not in the movie:

The part race at Honest Ed’s doesn’t happen, but we still have Scott engaging Todd in a bass guitar and the vegan police thing still happens with Scott tricking him into drinking a half and half coffee to bring them in.

The Clash at Demonhead’s drummer doesn’t turn out to be some kind of ninja robot who cheats with Todd on Envy and instead of Envy kneeing Todd in the junk, it’s Ramona who knees Gideon in the junk with the “let’s both be girls” line.

The battle with the Katayanagi brothers is different as well, instead of them kidnapping Kim and using their zany twin attacks, Scott and Sex Bob-omb faces them in a battle of the bands where they fight using music. In fact, they really chopped up their part, since they don’t build robots for Scott to fight either. Oh well, the music battle was a cool cg music extravaganza.

There is no battle at the Toronto Library between Knives and Ramona, that’s shifted towards the end of the movie

Ramona doesn’t leave Scott the same way at the end of volume 5 instead, she goes off with Gideon.

The whole sidestory with Lisa Miller being involved with Scott, though there is a brief cameo mention of her being an ex-girlfriend of Scott’s as well as his previous relationship with Kim. They also dropped the backstory of Kim and Scott’s brief fling from volume 2.

Glowing foreheads are nary to be found in this movie which to be honest is a good thing. It didn’t really work too well for me in the comic and it would have made less sense in the movies trying to explain it even though the movie has a running time of 2 hours.

The fight scenes in this movie were truly incredible, far beyond what I would expect from Scott Pilgrim. Then again, he is the greatest fighter in Ontario.  The movie moves along at a very fast pace without being rushed, there is no real filler material or time for you to be bored. It goes from awesome moment to awesome moment. It’s one of the few movies that you don’t want to miss a single moment of because it’s ALL gold material. Of course, this also means there is no good time to take a pee break in a theater, so drain your bladder before going to the movie. The movie follows the books very closely with long strands of dialogue being pulled right from the comic with very minor deviations that, if anything, helps the story flow better.

Another really well done scene is the fight with Matthew Patel. Instead of being a simple fight with Matthew where his devil cheerleaders show up, it turns into a Bollywood dance sequence where he does a little dance and sings his lines in a hilarious accent. It doesn’t get much better than that. This was just the best movie of the summer. Forget Inception, Scott Pilgrim all the way, baby! The special effects in the movie were well done for the kind of the movie this is. We aren’t expecting effects on the level of Transformers, but they serve the movie well enough. For the most part, the special effects are done in the form of comical sound effects or graphics superimposed on top of the actors to give it a real comic book/video game feel that Scott Pilgrim is known for.

On August 13th when Scott Pilgrim hits theaters all across the nation, skip work and school to see it, you won’t regret it!