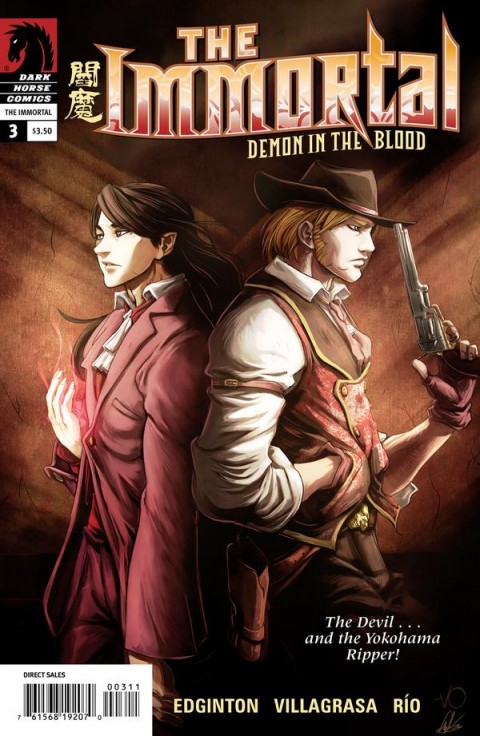 Dark Horse’s modern, mystical samurai tale continued with its third issue last week. The story is based off the Japanese novel Ura-Enma, written by Fumi Nakamura and follows a young tattoo artist versed in the art of imbuing spirits into the subject of his artwork.

After having his life saved by the application of a mystical tattoo, the now-immortal  Enma Houshou has turned to the art himself. Having learned how to imbue the essence of helpful demons into another’s soul, he discovers that many others have been marked with tattoos of evil demons who force their hosts to kill to thrive. One in particular, a man named Yasha, killed Enma’s sister many years before, but while his pursuit of vengeance continues, another evil force is about to rise.

Enma finishes his tattoo work on his customer, admiring the freshly coloured flower on the woman’s back. She comes on to him, but Enma spurns her citing they have obligations to abide by in this life. Later that day, Enma’s adopted sister, Natsu, meets with Yasha for evening tea, a meeting where she discovers Yasha to be consuming a herb to grant himself immortality. After tea, she meets Enma and apologizes for being late. They depart and travel home to her apartment where they begin to argue over money and their  feelings for each other, but are interrupted by the police. Enma wakes up later to discover himself in prison, the police believing him to be responsible for the deaths of many women throughout the city. After speaking with the chief his innocence is proven, although he learns the woman he tattooed the rose for, Chie, had been killed by “The Lady-Killer.” After arriving home late, Enma encourages Natsu to flee town, but she refuses unless he explains why. Enma tells Natsu the story of his master and of Yasha, and how he used the art to draw a tattoo on his own body, creating an immortal cannibal demon requiring the hearts of the living to survive, forcing Yasha to kill lest the demon decide to eat his mortal soul. As Natsu digests the revelations, Yasha breaks into their home and taunts Enma before shooting him and throwing him across the room. Enma summons his powers and the two engage in battle  in the Yokohama streets, culminating in a large explosion which shakes the city block.

As far as Japanese stories are concerned The Immortal, Demon in the Blood is plotted along the same lines as traditional martial arts stories rooted in vengeance where the main characters are driven by a need to find justice for a past wrong and to defend the honour of their family. We find Enma in a situation where his life is consumed by seeking to balance the scales of fate through avenging the death of his sister and killing Yasha, and in that respect this issue was packed with multiple revelations. It’s here Natsu discovers Yasha’s nature and the history of the tattooists, notably her adopted brother Enma. Where this issue shines are the final pages during Yasha and Enma’s battle in the Yokohama streets. I felt like their fight was well scripted, although the actual character dialogue throughout the issue felt awkward and unnatural coming from their mouths. It felt very clunky and buttoned up in propriety. With that said, I feel like Edigton captured the heart of the story very nicely in adapting the character from its original conception, as he has adapted it to a very honourable, loyal individual who is at times magnetic.

The artwork is finely pencilled and coloured, consistently good throughout the issue without pause. No single aspect of the art stands out, rather the combined efforts of Villagrassa and Rio offer some complexly drawn panels, combined with some great action-packed scenes towards the end of the installment. One such example includes the meeting between Yasha and Natsu, where Yasha holds the bottle and we can see the distortion of his hand caused by the liquid, also highlighting the tattoo on his palm which is elaborated upon during a later conversation between Enma and Natsu. During the final battle scene in the issue I liked how the demons empowering their bodies were clearly depicted hovering above them, mimicking their movements as they’re made. The powers themselves are drawn similarly to the powers of Marvel’s Iron Fist, leaving it somewhat unoriginal in its own conceptual right. The final panels were very intense as they built up to the last page with the two warriors charging at each other with their hands glowing green as they’re surrounded by fire; their hands meet and sparks are created, causing a large explosion in their wake.

The recap page was very helpful in bringing me up to speed with the story’s progression, a helpful element in a book not particularly well known. I enjoyed the read, and felt it had some interesting, classic Japanese philosophical elements combined with the strict code of honour intrinsic to the samurai’s way of life. It’s a very different tale, but one I’m glad to have read as it’s a departure from most other modernized books available from any given publisher. The book is a marriage of mystical elements and Japanese culture which is entertaining if you’re a fan of that genre of entertainment. I feel like they could do more with their powers, but perhaps we’ll uncover their full capabilities in the final issue. The characters themselves were relatable in their roles, as the relations between each were realistic and believable. The story very much hinges on the strength of their interactions, and in that respect The Immortal, Demon in the Blood definitely succeeds.