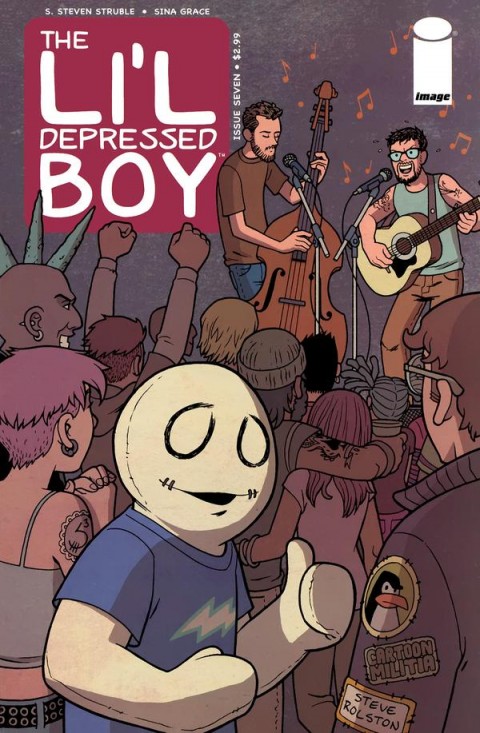 The seventh issue of S. Steven Struble and Sina Grace’s series about the little depressed boy named LDB hit store shelves last week. The story chronicles a down-on-his-luck young man who’s thrown from one emotional extreme to the next, which is something I think we all know too well.

After finding out Jazz only wanted to be friends, a dejected LDB goes out on a road trip with his best friend, Drew, to see one of their favourite bands in Oklahoma City.

Drew and LDB are driving on the highway leading into Oklahoma, hoping to arrive to the venue in time to see the Andrew Jackson Jihad, which is one of their favourite bands. After reminiscing about Drew’s time in the slammer, LDB thanks him for asking him to come along for the trip, adding he really needed some time away from his usual surroundings. After lamenting about not wanting to be the kind of guy who waits around for a girl hoping for something beyond friendship, as well as the future of kickboxing, a storm begins outside as rain punishes the windshield of Drew’s truck; Jazz calls LDB moments later to further twist the knife in his heart. After stopping at a gas station and returning from his sprint inside and out of the snack bar, Drew tells LDB they’re going to have to turn around and go home. Dejected, LDB falls asleep in the passenger side seat, only to wake up later and realize that Drew powered through the storm and got him to the concert, just in time to hear the final verses of the last song of the night. LDB leaves Drew and goes to the washroom, afterwards buying a band t-shirt before returning to the venue floor as chants of  “one more song” begin. The final song rings throughout the venue’s halls, as a smiling LDB finds out that perception is everything; even though they only heard two songs, the trip was well worth it.

Struble’s story explored two basic themes in this issue. First, we found the bond between LDB and Drew to be an enduring, true and honest friendship. Just when LDB was at one of his lower points of the issue, his best friend came through for him and drove through a torrential downpour to get him to the concert as promised. It’s here we see the lows and highs LDB experiences, not unlike those we experience in our own lives. We experience disappointment and joy equally, sometimes the former resulting from a deficiency in the latter, especially when we find ourselves in a situation similar to LDB. It’s here we discover the value of friendship, as individuals like Drew exist in our lives who will, either literally or metaphorically, drive through a storm for us. The second theme we find within the issue occurs towards the end. Despite driving through the storm, LDB and Drew are late for the concert and arrive just in time for the band to play their final song. Dejected at missing the concert, LDB buys a t-shirt only to quickly find himself joining in a chant for an encore from the band. It’s here he finds the silver lining in the trip: yes it was a terrible, rainy trip. Yes, they missed the concert. But had they not gone, he would not have discovered the truer nature of his friendship with Drew, nor would he have heard these lyrics:

Effectively we learn through Struble’s story that perception is everything, and that if all we ever see is the negative we become blind to anything positive. Sometimes, it’s the little things that make our days, those moments we wouldn’t trade for anything and help us find contentment amid any storm.

If you’re new to the series, the first thing you’ll notice is the glaring difference between LDB and the other human characters in the comic. LDB is drawn by artist Sina Grace to be more of a ragdoll, complete with a more circular head and indistinguishable, plain features consisting only of a mouth and eyes. What’s been remarkable throughout the series and which continued in this issue is how Grace communicates emotion through simply changing how he draws LDB’s eyes. Communicating sadness, happiness, inquisitiveness, melancholy and contentment; among others beyond the offered examples, Grace creates a wonderfully drawn, scaled back but communicative visual discourse which speaks louder than dialogue could ever aspire to. What’s visually remarkable is the degree to which 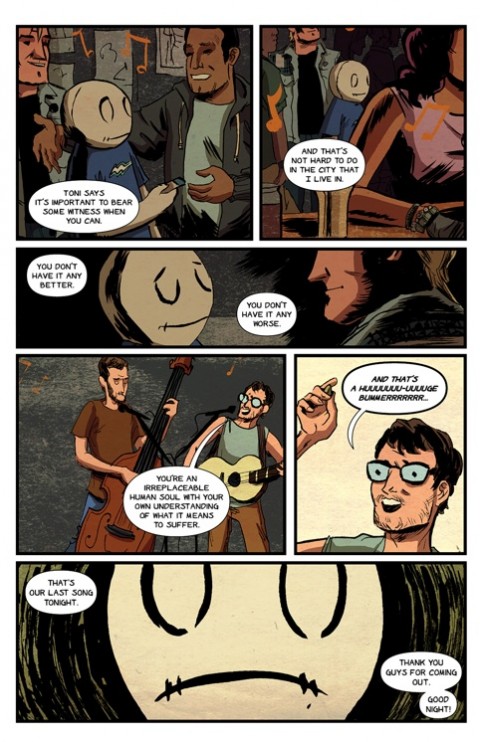 Grace’s LDB emotes better than any character in the book, accomplished through the eyes and mouth. It’s wonderful in its simplicity.

As has been the case with the rest of series, this is a wonderful little story about a boy who has been put through the ringer by the whims of fate; LDB simply can’t catch a break. The story follows a depressed young man who wants to emerge from the seclusion of his existence, but can’t even begin to conceive of how to do so. Even more, we find him trying to socially integrate, but failing to do so. There’s a tragic element to the character and the reciprocating, silent violence of the depressive cycle we find him in, but in this issue we find solace in the silver lining of specific moments where everything is unquestionably okay. Despite hardships, that friend willing to drive through a rain storm to get you to a concert or hearing those lyrics to a song that really speak to you make the entire experience worthwhile. Whether you’ve missed the majority of the show or not becomes irrelevant. If you’ve yet to check out this book, I would suggest doing so. It’s easily one of my favourite sleeper hits of the year.