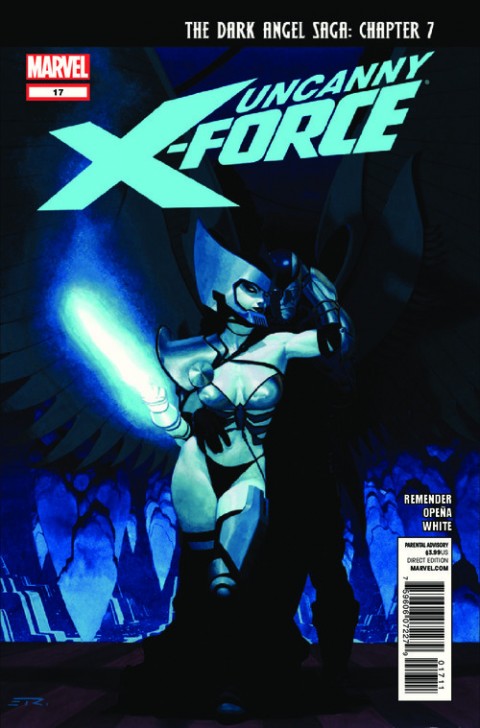 I’m back this week, after cutting my CBD work week in half due to extra-curricular activities, to bring you a review on the latest part of Rick Remender’s Dark Angel Saga. Wolverine and his team have jumped from their own dimension to the AoA realm and come back only to find their friend has been overtaken and is the new Apocalypse. What happens next is anyone’s guess.

Apocalypse as we knew him is dead, but in his place a new angel of death has risen in the form of Warren Worthington. Taking his seat in En Sabah Nur’s throne, Archangel has devised a plot to remake the universe. With a formidable group of villains behind him and Psylocke primed to become his bride and new Death, can Wolverine and his team stop their former ally before it’s too late?

Worthington relives a moment in time where he’s speaking to Professor Xavier when they were both very much younger than they are now. From that conversation, Xavier always made clear that Warren possessed something that no other X-Man had: courage. Not knowing what his true potential will be, Xavier was always certain Worthington would surely leave his mark on the world. In present day, Archangel greets his bride, the newly transformed Psylocke, with a kiss while the AoA Iceman easily picks apart the foes of Archangel’s new order. Wolverine climbs the icy fiend but is thrown down to the ground below. Just as Ice Man moves in, crusaders from the AoA universe arrive to save the day, among them Sabretooth and Nightcrawler. After their assault, a determined Archangel becomes resolute in his goal. Before he can complete the task, from the ground far below Nightcrawler teleports Wolverine and company directly in front of Worthington. Wolverine and Sabretooth quickly attack, but are fended off by Worthington who resolves to continue his self-appointed mission and plant the death seed after casting them aside. The feral duo refuses to let up, following Archangel as he nears his goal. Elsewhere, Psylocke and Fantomex share a moment, before she removes what she believes is his head, causing enough confusion for the AoA Jean Grey to access her mind and burn out the Death persona. Precious seconds later Jean and Nightcrawler attack Warren, the latter quickly being dispatched before overpowering the former. Sabretooth is the next to fall as he’s gutted and left face down on the snow. He leaves them behind and travels up to the source, where he wishes to plant the death seed; yet, he finds the real Fantomex and Psylocke waiting for him.

The seventh issue finds the transformed Worthington at his most vicious. Clearly having been subsumed by the Apocalypse identity, Worthington coldly and calculatedly picked apart his former friends whom had stood in his way. Perhaps more so than the original, this iteration of the Apocalypse persona is quite compelling in his motivations and how precisely his machinations materialize and have materialized over the course of this story arc. The degeneration of Warren Worthington towards the amoral, anti-heroic Archangel has been a surprisingly good read. Remender has executed this story well, and as a whole, this entire run has built to this point and this book is a mark of the writer’s talents. His exploration has really developed Worthington further than ever before, while interspersing the underlying personality of the former Mr. Worthington. It’s here we find in Remender’s work a startling reality relating to the story’s prime villain. His ambition, courage and unlimited potential render his capacity to accomplish greatness towards limitless levels. What’s most interesting is the realization that his capacity for self-deluded, perceived altruism was always present: much like Alan Moore’s Adrian Veidt, Warren Worthington is a man unafraid to crack a few eggs to attain the greater result. Remender’s Archangel is the mark of a supreme antagonist in the comic book world.

Opena’s creative, dynamic artwork takes centre stage in this issue. Accompanying Remender’s antagonistic version of Archangel is a brilliantly vicious series of panels which articulate the beautifully vicious, cerebral nature of this new version of Worthington. Take the first Wolverine-Archangel encounter in this issue. Upon initiating the conflict, a wounded Wolverine lunges at his former friend with violent intentions, but his attack is easily deflected by his wonderfully designed metallic wings which are reminiscent of his traditional feathered wings. Opena’s best rendering is saved towards the end once Jean Grey enters the battle, where his wings take on a life of their own and move through the air with gracefully violent precision, even maneuvering themselves backwards to impale Nightcrawler. We see similar violence once he attacks Sabretooth, and it is no less amazing. Joining Opena on colours is White, Villarubia and Sotomayor. They help bring Opena’s violence to life, but they also successfully accentuate the rest of his work by bringing his brilliant pencils on the elemental Iceman, the scenes where the AoA characters arrive and the page where Jean Grey arrives with the Phoenix Force in full effect. The team additionally provides a nice contrast to the book’s artwork using a different hues and tones to differentiate the flashbacks and subconscious strolls down memory lane by greying or yellowing the colour comparatively to the rest of the book.

Uncanny X-Force remains atop the heap as a must-have X-title along with (the departing) Mike Carey’s X-Men Legacy book. While the quality of the other books have wavered or waned altogether, this version of X-Force has been a continually compelling book. The Dark Angel Saga and the book’s opening arc have maintained a continuously interesting tone, which as we’ve found, has resulted in the creation of a new X-Men antagonist that perhaps surpasses any before him. The scope of the character’s vision exceeds that of Magneto at his prime, and perhaps the original Apocalypse himself. If this story heralds Archangel as a new X-Villain, then I welcome it. Answers should be coming soon, as the saga concludes with the next issue.