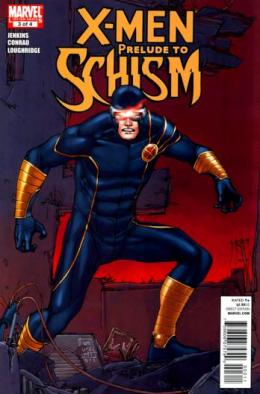 This week I’m looking at the third issue of the X-Men title leading into the monumental story that purportedly will change the face of the X-Men. By now we’ve seen the teasers and previews, but we’re unclear of how the pieces fit. This is the prelude to Schism and we find a huge decision awaits our favourite mutants.

Mutantkind stands idle in its darkest hour. With a dire threat quickly approaching Utopia, the X-Men stand waiting for Cyclops, their General, to make a calculated decision on how they are to proceed. Seeking counsel from both Professor Xavier and Magneto, Scott Summers’ biggest decision as a leader rests at his feet.

The darkened skies above Utopia mirror the tone within its walls. Cyclops stands gazing out across the bay, recalling the bravery of his mother, wishing she were able to offer him guidance now. Cyclops begins to revisit an age-old question he has asked himself countless times centering on the capability of a man without sight to lead. Scott’s internal monologue continues on across several pages, highlighting the gravity of the decision that lays at his feet with the future of mutantkind knocking at their door. Here we find Scott’s thoughts wandering, recalling the qualities and strengths of his teammates and friends and what he finds admirable in them. Scott stands alone amid bickering discussions in an adjacent room as the X-Men become increasingly antsy as the threat draws nearer.

Jenkins’ focus on Scott and his decision are nicely characterized as the weight on his shoulders permeates into his dialogue. We find him questioning himself in such a way that’s believable, his doubts of his leadership evident in how he questions his capacity to lead. I enjoyed the continuing monologue during the initial Emma-Scott scenes where Summers internally remarks, “They’re going to ask me what to do. They’re going to want to see in my eyes that I believe in my decision and that I believe in them. But my eyes don’t work that way. That’s what they don’t know, because I never tell them how much it hurts,” he says, referring to his headaches.

The story continues forward in a flashback sequence spanning initial assessments of Scott’s headaches as a child, ending with his leaping from a plummeting plane with his brother, a single parachute between them. They crash to the ground and Scott becomes concussed after hitting his head. Emma eventually joins Scott to provide some last-minute reassurance to her partner in crime; the tenderness and love evident in her empathy towards the gravity of his decision. I thought Jenkins did a great job of characterizing their relationship in these pages. Summers proceeds to address his team and assigns orders to each teammate, tailored to their abilities, to deal with the forthcoming threat. Jenkins notes at the end that although Cyclops may not be able to see, leadership and leading into uncertain times doesn’t require sight, only vision. I thought Jenkins properly characterized Cyclops’ change in posture as the issue developed towards his coming to a decision, ultimately accepting his role as a leader and embracing it.

I really enjoyed Conrad’s early pages which nicely visualize the decision facing the X-Men’s leader. The dark, starry night-time sky is portrayed as a silent, calming environment void of movement or thought. All we’re left with is a man alone with a decision with such gravity it will shape the lives of his closest friends. As the scenes pull closer and closer into Cyclops’ face, we understand the calm, motionless night-time landscape as a direct reflection of Cyclops’ thought process and steely expression. Dually it can be inferred as a direct contrast of his tumultuous internal struggle, creating a dichotomy between the façade and the reality. The artwork on the opening page is illuminated as we read on and understand the immensity of doubt that pollutes Scott’s mind as he arrives to a decision later in the issue.

Continuing on, I felt another strong point of the art was Scott’s recalling the qualities possessed by each of his teammates, displaying smaller panels of each as Jenkins communicates Scott’s thoughts on each person, while in the bottom right of the page we find Scott again deep in thought staring down towards the floor with the same expressionless look seen earlier. The same technique is used as Emma greets him, although what I enjoy is how the dialogue is expressed regarding his lack of sight, while continually focusing in on his visor. The subtext is evident and nicely communicated through Conrad’s artwork.

Moreover I enjoyed Conrad’s pencils. Although not particularly detailed to the point of overtness, his characters all maintain softened features while still allowing each to maintain distinct characteristics unto themselves. They aren’t overbearing and look quite nice in their simplicity.

I felt as though the story and artwork came together to really highlight the immensity of the decision facing the X-Men. As a singular issue I felt it was quite good. However, the Prelude story thus far has dragged on for three issues, leading towards Scott’s decision in issue three and presumably the revelation of what precisely is threatening the mutants in this story as we draw closer to Schism. This is irritatingly problematic in that for three issues this looming threat has been dangled in front of our eyes without an allusion as to what it was or why it was happening. I often felt as though I should know these answers and began scrambling through other stories for any hints, believing I’d missed something. However, this is simply a poorly conceived story device central throughout this mini-series and I felt it took away from the story, reminding me more of Cloverfield than an X-Men comic. Although we had some resolution with this issue, I feel like we took too long to get to this point. Regardless, there is an undertone of suspense and mystery as we march towards Schism and supposing the next issue pays off, the previous three will have been worth it. I suspect however this story could have been told over three issues as opposed to four.