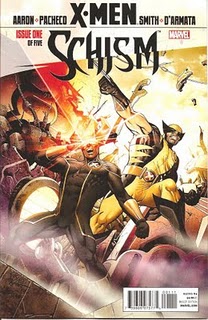 Mutantkind has been to the brink and back, and at least it would seem, have finally found some measure of peace for themselves. That all gets thrown out of the window as Schism promises to drive a wedge between their ranks, leaving Cyclops and Wolverine on opposite sides of the battlefield.

Since M-day the mutant race has been on the ropes as they simply try to survive. During Utopia, the X-Men constructed a large island-home for themselves and moved all of mutantkind to their new homestead. Now a new threat poses a risk to everything they’ve built and when the dust settles, the X-Men may never be the same again.

After a long day at the office, an impaled, shuriken riddled Wolverine returns to Utopia for some rest and relaxation. He has little time to do so after visiting Hope and the other young mutants and flopping down on his bed, as Cyclops callously walks into his quarters and requests that he get up and come with him to an international arms control conference to discuss issues relating to mutantkind. He reluctantly tags along as Scott’s security detail, indirectly providing legit presence based from his association with the Avengers. Summers begins his speech, one requesting that all states shut down their Sentinel programs, but is eventually interrupted by Quintin Quire. Quire initiates a full-scale attack on the international delegation, prompting one state to commence a Sentinel assault. Wolverine and Cyclops fend off the attack, returning to Utopia shortly thereafter. During a meeting, Hope enters the company of Cyclops, Emma Frost and Magneto, with Summers allowing her to watch footage of the Sentinel attacks. They are shortly joined by Wolverine and Idie who together stand to face both an onslaught of Sentinels and potentially a new Black King of the Hellfire Club.

Schism kicks off with Wolverine and Cyclops at the fore of the issue, evidently placing the current nature of their relationship front and centre. This allows us to dissect and analyze the relationship to eventually set the context for how it will degrade. I feel like the story served highlighting the almost one-sided nature of their relationship, with Summers all but ordering Wolverine to get out of bed and escort him to the meeting of international delegates. The biggest move of note in the issue is the re-introduction of Quintin Quire from Grant Morrison’s infamous New X-Men run. His function as catalyst of the schism between the two eventual factions of X-Men is effective, christening a renewed fear and hatred of mutants and a consequent Sentinel onslaught from humankind. This first issue of Schism establishes a tone for the mini-series that hearkens back to the classic X-Men stories focusing on the inherent disdain humankind has for that which it doesn’t care to begin to understand.

I’ve always enjoyed Pacheco’s artwork and I feel his work in this issue was on par with his greatest works yet. I thought the first page with Wolverine and Ice Man was done in a way that captures the mood of Wolverine, contrasted against the relative ease and calm of Ice Man. The page’s panels gradually zoom in from a bird’s-eye view of Utopia into a closer shot of Ice Man sitting on the beach as Wolverine walks by him with shurikens and arrows in him, treating it as another day at the “office.” The later pages focusing on an exhausted Wolverine flopping on his bed complement this tone, amplified further by Cyclops’ beckoning no sooner does the stumpy Canadian lay down. Chronicling everything from sitting on the bed, laying face down, Cyclops appearing, Wolverine sitting up and then groggily putting his uniform back on are captured sequentially. I also thought, noting where the story is heading, that it was a nice touch to have Cyclops and Wolverine almost always standing side-by-side as they walk into the conference, interestingly offset by a flashback panel depicting Cyclops and Wolverine arguing. His finest work though was the two page splash featuring Cyke and Wolvie going to work on some Sentinels in a fantastically pencilled and coloured page. The nicest piece though, which characterizes the eventual split, are the final pages where after they dispatch the Sentinels the two visibly have a difference of opinion on how to deal with Quire. That point of view was emphasized by an actual split between a horizontal panel with one of the characters in each half. This becomes more blaring when the X-Men have a final meeting in the issue which doesn’t immediately include Wolverine, centred instead upon Cyclops, Emma, Magneto and Hope. There wasn’t a bad panel in the issue and I feel like the artwork matched up very well with the script.

I feel like the issue served its function as stage-setter for what’s been heralded as a huge X-Men centric event. Knowing beforehand that there will be a definitive split within the group that creates two factions of mutants, the book operates as a leading story, taking us step-by-step through the processes of the group’s degradation. We can see the seeds in issue one, although I’m unclear how this ties into the Prelude to Schism or where it’s placed in the sequence of events. Regardless, the journey is infinitely more interesting than the destination and I believe this series will deliver an enjoyable reading experience that will divide mutants along militaristic and empathetic lines.