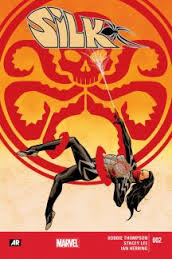 I’m not surprised that you are interested in ordering this menu item. It has been one of our most popular offerings. I’m sure it really caught your eye.

..And that’s one of my biggest issues with the issue.

I’ve bellyached about it plenty of times: Marvel and DC appear to shy away from launching new characters, instead they repeatedly reuse, revamp, recycle existing ones, familiar ones…ones they have movie plans for.  But Silk is different.

I am not privy to story sessions at Marvel Comics. I have never made it into the holy sanctum known as the Bullpen. I came close once, but an assistant editor saw through my clever “Strippergram” ploy.

Because of my exclusion, I have no idea how the character of “Silk” came to be. Did it spring to life fully-formed from the mind-melded brains of Dan Slott and Humberto Ramos? Was she a by-product of countless brainstorming sessions dedicated to populating the Spidey-verse? Did somebody at 135 W. 50th Street, Nyark-Nyark say: “Why don’t we give Spider-Man a Supergirl?”

Before you fire up the Mac to send me an e-mail full of curse words (most of them misspelled), I only throw that out because at it’s very foundation, Silk’s origin is similar to Kara Zor-el’s because Kara’s origin was exactly the same as her somewhat more famous cousin’s: Krypton, rocket, blown-up parents, yadda-yadda.

But from that point in her story, came the proof that God is in the details, or at least he is subletting in Dan Slott’s laptop.

Silk was locked up for a decade in a secret bunker, a sort of glorified bomb shelter. It was a remarkably courageous act on her part, and a brilliantly creative one on Slott’s part because it opened up a world of character development possibilities. It’s a wonderful spin on the classic “stranger in a strange land” (thanks Mr. Heinlein) as Silk/Cindy Moon has to readjust to a world that she doesn’t really know, like Johnny Smith in Stephen King’s Dead Zone, and of course, Mork from Ork.

Her character is a breath of fresh air, with powers similar to Web-Head’s and yet different enough that her use of those powers are really fun to watch unfold…unspin?

And visually? Home run, Humberto. No, make that a grand slam. Better yet, a grand slam in the bottom of the ninth inning in Game Seven of the World Series with your team down by three. Silk has an incredible look. 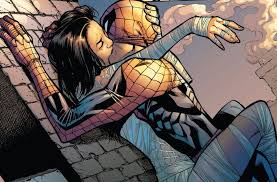 A big component of her first arc was this wild physical attraction to Spidey, a very mutual attraction I might add. I’ve been reading comics a long time but don’t remember ever seeing a make-out session with the participants tongue-wrasslin’ while webbed to the ceiling. Silk is a very physical character…which is the only description I can use without embarrassing my Gramma Consuela.

Which brings me back to my original “issue with the issue” comment ten paragraphs ago:

What’s up with the art in Silk? Stacey Lee is a very talented artist. No I mean it. I love her stuff. Fer cryin’ out loud, I follow her on Twitter! I’m a friend on Facebook. (Well, I was before this came out)

It looks really good. She is loaded with style.

Marvel, if the plan was to offer a new comic aimed a younger audience, to develop audiences and usher in a whole new generation of comic book aficionados, I applaud thee. 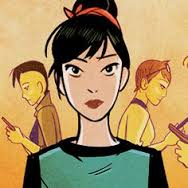 But this isn’t the book for that.

Have the cajones to embrace a vital, charismatic young woman “seething with vital hormonal secretions” (to quote Dan Akroyd as Jimmy Carter on SNL). Silk screams out for a different set of visual priorities.

Writer Robbie Thompson gets it. His script  carries through on Silk’s original premise. Very contemporary, with a terrific sense of humor. Even her attempts at “funny lines” tossed out during fight scenes –like Spidey– are adorably outdated (see previous information regarding “stranger in a strange land” and “decade in a bunker”). He writes wonderful humans. He also writers wonderful super-humans, and to be honest, he writes wonderful Supernatural humans.

Please, please, please, Stacy Lee, don’t take my opinion as an indictment of your talent. You are loaded with it. And there’s not an artist in the world who is going to turn down a shot at doing the art for a Marvel Comic. I just think Silk needed a different approach.

Yeah, Marvel, we picked up on that. Dave Johnson’s cover has that realistic look we were talking about. Stacey Lee’s cover with Skottie Young? That was the variant cover. Johnson’s cover was the one you wanted on bookshelves, beaming out from the ads in Preview Magazine.

This is a good book. The things that make Silk unique, however those things came to be, whether brainstorm or mind-meld, are here. You should add it to your pull list.

I give ‘Silk #2’ a Three-Shrimp Cocktail.