Two of the best story arcs in the 70’s Bronze Age featured the mad Titan Thanos and defined the roles of Captain Marvel and Adam Warlock in the Marvel universe. His first appearance was in Iron Man #55 and he soon made his way to the pages of Captain Marvel and the Avengers in an epic battle for the possession of the cosmic cube. This was followed shortly after with a second storyline involving the mysterious Soul Gems. This sprawling story began in the pages of Warlock brought The Avengers in to play, and ended in the classic Marvel Two-In-One Annual #2, with Adam Warlock delivering the decisive death-dealing blow to Thanos. The statuesque image of Thanos at the end of Marvel Two-In-One Annual #2 is not an easy one to forget. Outside of an important cameo in Marvels superb graphic novel “The Death of Captain Marvel” we don’t see Thanos in comics again for nearly 13 years with his return in our featured story today.

This technically is the third volume of the Silver Surfer following an 18 issue run in the sixties and a one shot issue in 1982. This 146 issue run is by far the most commercially successful run the Silver Surfer has had in comics to date. In this series the Silver Surfer is free to roam the cosmos and this opens a myriad of possibilities in terms of storylines. I think that the character of Thanos also played a large part in the success of this run as well. At the start of their relationship I believe they each think they are superior to the other. The Surfer sees the enormity of the threat Thanos first, and Thanos soon realizes just how dangerous the Silver Surfer is going to be to his carefully laid plans.

Thanos was created by comic artist and writer Jim Starlin. Jim has come back to the writing chores for our story arc today, and steps in to write further Thanos related stories through issue #50. The penciling is done by Ron Lim and inking is by Tom Christopher. 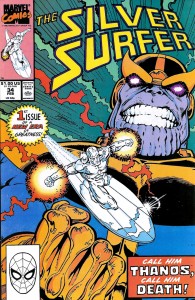 Even Demi-Gods must dream

The Silver Surfer has arrived on a seemingly deserted planet. He is tired and can’t remember the last time he slept. He appears to fall asleep and begins to dream. In his dream he see’s two little demons carrying a chest to Lady Death. She opens the chest and retrieves a soul, all the while complaining about a serious in-balance in the universe. The previously empty planet is now full of aliens. Too many people living and not enough death! Next she has a small baby that she hurdles to its death only to be saved by the now involved Surfer. Once saved the baby turns into a monster and attacks the Surfer. After a couple more skirmishes he wakes up and the planet is empty once more. What a nightmare!  No it’s worse than that as Thanos appears and introduces himself, the nightmare has just begun!! 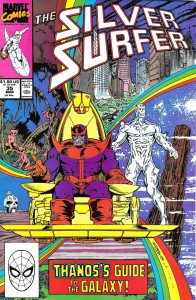 The name is Thanos!

The Surfer introduces himself to Thanos with a quick blast of power and a warning to Thanos that he is powerful and doesn’t suffer fools gladly. Thanos is not impressed and he begins to tell the Surfer of his plans as they set off to visit the planet Salaria together. Her highness Death has decreed that there is a universe wide problem of over population amongst vast civilizations. We need to reduce the surplus population by half in order to restore balance. Death has resurrected Thanos to accomplish this task and that is what he intends to do (and he is very good at it). The Silver Surfer tells Thanos he will stop him. Thanos turns to the Surfer and tells him that he won’t, in fact The Surfer is already helping him and explains how. The Surfer has carried bacteria from earth on his body that is fatal to the inhabitants of the planet Salaria. The Surfer races back to the planet and finds mountains of dead Salarians, distraught he quickly cures the remaining population. Thanos observes this and let’s out a loud belly laugh. So loud it is heard by Chronos who now knows Thanos is back, and he proceeds resurrect Drax the Destroyer. 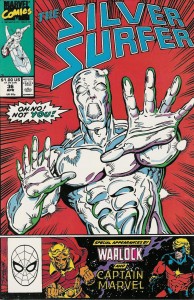 The Silver Surfer heads back to earth and to the Avengers mansion. There he meets Captain America and he tells Cap of the threat of Thanos. Cap gives the Surfer the lowdown of their two previous battles with Thanos. He also suggests that he contact Mentor on the planet Titan for more information on Thanos. The Surfer leaves for Titan, but is intercepted by the super-pest the Impossible Man. I had just endured an issue with this guy in issue #33 and he is back already. He wants to develop a sense of humour for the Silver Surfer; he feels he will need it while battling the not so funny Thanos. I can’t say I remember the Silver Surfer ever laughing. Maybe the Impossible Man is on to something here. The Impossible Man continues to pester the Surfer and he finally agrees to try and lighten up, they part ways and the Surfer continues on his way to Titan. I wonder if Jack Kirby used to think of 1940’s Stan Lee as his Impossible Man?!! 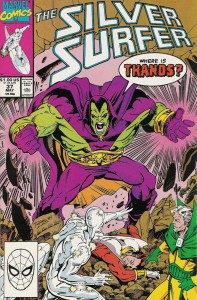 The Surfer reaches Titan and meets with Mentor and Starfox.  Mentor gives the Surfer details of the Mad Titan past life and warns him to take the threat of Thanos seriously. Drax the Destroyer arrives intending to kill Thanos but unintentionally hurts Starfox instead. It is clear this is not the Drax we have met previously (closer to the guy in the GOTG movie – not too bright). He wants to join the Surfer in his search for Thanos but the Surfer sees him as liability. The Surfer leaves and Drax follows, and try as he might the Surfer can’t shake Drax. The Surfer takes him to his home away from home the FF’s headquarters to see if they can help him. They get him in front of a TV and he seems to respond positively (like any person with half a mind would!), and the Surfer sneaks out leaving Drax to his rehabilitation and himself on his journey to find Thanos. 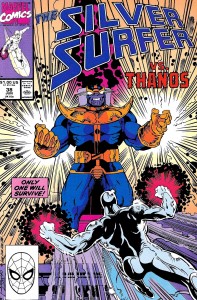 Thanos has returned to his old stomping grounds and confronts Nebula and Geatar. With two quick blasts they are both down for the count. The remaining demons quickly switch allegiances to Thanos. Death arrives disappointed in Thanos for moving too slowly in terms of wiping out massive populations. Thanos has a plan and needs to proceed slowly to get the job done right. His first plan is to get the Silver Surfer out of the way. The Surfer is searching for Thanos when a holographic image of Thanos appears and asks for a meeting on the planet Pyraxion. The Surfer knows the planet and its people are in peril if Thanos is there. He speeds there and attacks Thanos with no effect. Next he attacks his chariot and blows it up with Thanos aboard. The Silver Surfer picks up the charred remains and takes it to Titan thinking the threat is over. He has however sorely underestimated his opponent. The charred body is in fact an augmented copy of Thanos using the dead body of Geatar. Thanos is alive and well. He now can go about the business of collecting soul gems without being disturbed by the Surfer. This takes place in the mini-series the Thanos Quest, and he returns to the pages of the Silver Surfer in a few months time. Thanos is back in the Marvel universe, and this time he is here to stay!

The Silver Surfer gets a real boost from the addition of Thanos to his title. Mephisto, Warlock, Galactus, Firelord, and many others join in the fray and their are some pretty cool stories that follow this arc. It is hard to believe that Marvel could leave a character like Thanos on the shelf for so long. Maybe there were legal reasons? He does remind one of Darkseid…

Overstreet values for the books featured in Arcs & Runs today are as follows #34 $6 9.2 and #35-38 $8 9.2. I don’t know why the first book in this arc featuring the resurrection and first appearance in nearly 13 years of Thanos, is cheaper than the others. The whole run is usually found in bargain bins although I suspect that won’t be the case with Thanos appearances right now.