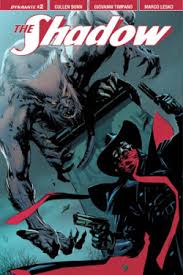 Most of the guys in the back are big readers. Think about it: None of us can afford internet or cable, so the only choice we have is passing around dog-eared copies of books, usually sci-fi, stuff like that. If there’s anything those mooks like more than reading it, it’s running their mouths about it. Yesterday I overheard this stimulating intellectual exchange:

“The schmoe who wrote ‘The Notebook’?”

“That was Nicholas Sparks, ya doofus. Meyer is the Wrath of Khan guy.”

“No! Sigmund the Shrink! The Train-Into-The-Tunnel guy.”

“Piece of junk! I wouldn’t use it to blow my nose wit”

“What was wrong with it?”

“Plus, the juxtaposition of exemplar and oppugnant forces feels like an obvious horological violation of verisimilitude!”

I read “Seven Percent Solution” when it was first published and I loved it. I also enjoyed Meyer’s two other Holmes ‘pastiches’, “The West End Horror” and “The Canary Trainer”. Here in the Kindle Era everybody has written a Sherlock Holmes book. You can’t swing a cat –or more appropriately, a Mouse– without hitting s novel or story someone has penned about the Baker Street sleuth. But when Meyer did it, it was a much rarer occurrence.

I thought about those books when I read Dynamite’s “The Shadow: Volume 2” Issue 2. It’s the Shadow meets Harry Houdini. To be precise, Houdini’s ghost, but why quibble? Especially when the entire story-line is about life after death and piercing the veil.

It’s more accurate to say that He-Who-Knows-What-Evil-Lurks-In-The-Hearts-Of-Men spends quality time with another real historical figure: Aleister Crowley, who, like Houdini, was in the Magic Business. Crowley’s brand of magic was quite different from Harry’s. Let’s just say they didn’t call Crowley ‘The Great Beast’ because of a bad haircut. 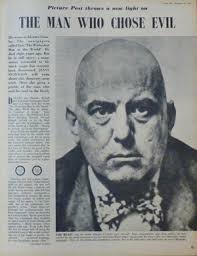 In that coy, disarming way of his, the Shadow convinces Crowley to help him. “You do not think you can lie to me, Crowley! The Shadow knows what evil lurks in the hearts of men!” Not surprisingly, Crowley agrees to help a brutha out.

The Shadow is squaring off against a coffee klatch of magicians (“Hey Rocky! Watch me pull a rabbit out of my hat!”). They are seeking something called ‘The Last Illusion’.

Outside of Chaykin’s work and Kaluta’s, I haven’t cared for hardly any Shadow comics. But Cullen Bunn and Giovanni Timpano have orchestrated something that actually feels like a Shadow story.

At the core of that story are some very cool ideas, and they have done a very nice job of staying true to the two main characters –The Shadow and Lamont Cranston. 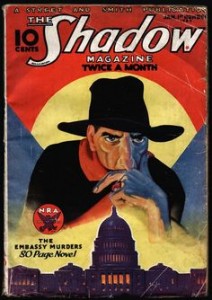 People belly-ache about Clark Kent never being recognized as Superman. Someday, someone is going to look at the Shadow and say: “Dang, son! That snot-locker looks just like Lamont Cranston’s!”

I give “The Shadow: Volume 2” #2, Four servings of bitter fruit