There is a much quoted Chinese curse: “May you live in interesting times”.   Why is that a curse? ‘Interesting’ doesn’t mean “good”. I don’t have my Uncle John’s Bathroom Reader on Chinese Curses open in front of me, but ‘interesting’ usually means ‘bad’ for at least some of the people involved. Tsunamis are interesting, but most folks experiencing one aren’t going to post on Facebook “Best Day Ever!”

(Of course Wikipedia says the whole story is bogus because there’s no proof that this curse was ever uttered by anyone from China. So kudos to Wikipedia for polling 1.38-billion people to determine this)

Truth is, we lovers of comic books are living through some damned interesting times. We learned this week that Marvel is going to shake the Etch-a-Sketch that is their Universe and start all over again in a couple of months. So, why should I recommend books for your pull list if they aren’t even going to be on the shelves by October?

On the other hand, their Dynamite Competitors (and I don’t mean Dynamite, but DC), have a slew of 2’s this week, so I’ll look at multiple titles. That way we can monitor how they are trying to wedge themselves out of the 52-car pile-up they called Convergence. 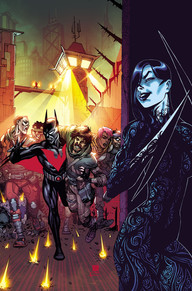 I certainly am glad that they got rid of all those future storylines and alternate realities so we could settle down and…WHA? Yes you guessed it, that’s what we have with Batman Beyond. The good news is Dan Jurgens is at the helm so you know you are in pretty good hands. He is one of the best story-tellers to ever dangle a plotline and he writes with style and humor. This future is pretty screwed and spins directly out of the Future’s End series. (The sound you hear is all the comic consumers smacking their foreheads because they blew off Future’s End as some unimportant tryout book for writers and artists). Batman Beyond is true to the original series and early run of comics, but ratchets up the content to the point you aren’t going to find it on Saturday morning cartoons any more. Maybe Adult Swim on Cartoon Network. Oh, and Batman is dead, btw.

And his replacement is a dead Robin. Got it? Good. On we go!

I give it Four 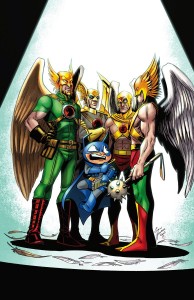 Dan Jurgens again. So, you can cut & paste that stuff from the section above, where I talked about how good a writer he is. The quandary with Bat-Mite is the same quandary you would face if you were trying to write “The Uncanny Jehovah”, or the “Astonishing Oprah”. It’s no fun to read about people who are invulnerable and omnipotent. It’s hard to come up with any kind of a believable adversary. Without a balance between your protagonist and antagonist, there is Zero conflict, equating to Zero tension, resulting in Zero interest. So Jurgens has given Bat-Mite a couple of supporting castmates who are not imbued with limitless powers to shape reality. Also, the writing, and the artwork by Corin Howell, puts the action in a reality that is not too cartoony, which has always hamstrung Bat-Mite tales before. 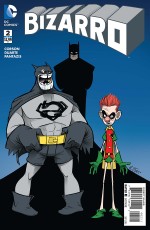 Me am not unsure what to say about Bizarro. As you probably forget, Bizarro am not very bad about being mute. Him doesn’t talk in no negatives, cause he doesn’t mean the opposite of what him is not saying.  Me don’t unthink it am not easy to misunderstand words he is keeping to himself. When me have to not translate the words that are not in the non word balloons, me does not get taken out of anything except story discontinuity. This am not a horrible, bad disaster.

I give Bat-Mite 2 three