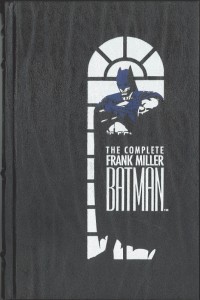 I’m a collected edition reader and collector, and have been since the early 1980s. DC had just started their own line of trade paperbacks and collected hardcovers but they continued to license those out to other publishers. One of the premier volumes to come out of that period is The Complete Frank Miller Batman from Longmeadow Press in 1989. This collects Batman: Year One, Batman: The Dark Knight and Wanted: Santa Claus Dead Or Alive.

It’s a beautiful leather bound volume collecting the Year One and The Dark Knight trade paperbacks along with the Batman story from DC Super Star Holiday Special 21. Thick paper stock, silver gilt edging and a silk ribbon; everything about this book said quality, for $29.95 USD.

Hugely successful and garnering multiple printings, The Complete Frank Miller Batman continues to be a highly traded volume. What I can’t understand is the wildly different prices it sells for. Overstreet lists it at 9.2 $45, no other grade. No surprise there, since Overstreet doesn’t do much with collected editions.

Then I went to where the real action occurs: eBay. Just looking at April 2016 twenty-one of these sold. The range is astounding: $19.46 to $99. What’s great about eBay is the out and out lies people state in their listings. My favourite is “the first and only printing of this book”, complete hogwash. There were at least two printings, the first printing having a blue silk ribbon and the second printing having a black silk ribbon.

Back to the sales. At first I thought it was based on condition, but clean like new volumes were going for $40 or so. Then I went to printing, second printings were in the $40 range as well. Even factory sealed didn’t bring the highest pricing. So what brought the upper $80-100 sales? Like new, 1st printing, NM. A new sealed volume went for $181 in March, with no indication of printing since it was sealed, while a pristine 2nd print went for $14 in February.

They are few and far between in local comic shops, but the last few I spotted were around $50.