Action Comics #403: “ Attack of the Micro-Murderer” 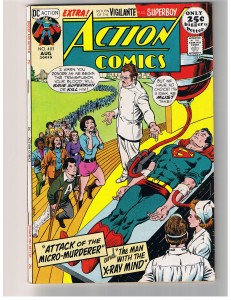 The Cover: Superman is laying on what appears to be a concert stage with two large hoses in him connected to a massive vat for the purpose of injecting blood into him. A long snaking line of donors are all there to donate blood to him while the doctor tells them their blood will either save or kill him. No frigging way, doctor, you mean to tell me that having a bunch of random people line up to add blood to a giant machine might not be safe? LIES! It doesn’t really look like they’re screening people, so it might turn into a giant AIDS cocktail being pumped into supes.

The Story: We start our incredible tale with a look of various criminals being executed for their crimes. Does anyone else find that these old Superman comes have a really morbid theme to them? Jump to the present where we find Superman chasing a helicopter which crashes into a radio antenna crushing the bank robber inside. With its final words, it declares itself as a Zohtt which has lived and died many times and it will get its’ revenge on him in the future. Puzzled by this, Superman goes to his Bat-Compu- I mean Super-Computer to find out what the hell a Zohtt is. The computer informs him that a zohtt is a magical wraith that possesses other living creatures making them malicious.

The next day, Clark Kent is sitting at his desk when a time travelling dildo explodes into his office and informs him that he must travel into the future and meet the zohtt or he will hurt some innocents. Using his superspeed, Superman travels into the future where he finds himself inside a lab with a raging headache ache and a dead woman on a table. Looking around the lab he triggers a television monitor to jump to life and replay a recording. Apparently the dead woman is a microbiologist the zhott possessed; who made a micro-organism that has infected Superman and will kill him. Jumping back into the present, Superman tries to seek medical help from the people of Kandor, but he can’t seem to shrink down as the zhott is the microbe inside his heart and the magical nature of the zhott keeps him from shrinking without suffering a heart attack. This then leads us to wonder…if the zhott’s magical nature lets him pass through Superman’s defenses, why didn’t he just possess Superman in the first place instead of going through an elaborate plan of biological warfare? Well regardless, since he can’t shrink down, Superman is informed by the Kandor doctors that he must received a blood transfusion of hundreds of gallons of bloods to flush the microbe out of his system. That’s right folks, Superman is like your car engine and needs to be flushed out but with gallons of your precious life fluid instead of motor oil. Superman makes a heart felt plea for aid on TV for blood and receives hundreds of donations. While being hooked up to this tanker containing this disgusting cocktail of blood, the doctor informs him that when the blood passes through, it might just push out his kryptonian blood out of his blood. Superman’s reply? “And I say it won’t mix with my super-blood—but just filter through!”? Yeah, so his super-blood can filter other fluids right through it…so why are you stealing hundreds of gallons of blood when you can use water instead? After activating the machine, the microbe is almost pushed outside of the body of Superman, but it takes shelter inside Superman’s lymph nodes. Sensing the failure of this excessive waste of blood, Superman flies off to outer space looking back only to see his emblem shining back at him. Apparently if certain cities of the United States turn on all their lights at the same time, they can make a S that is yellow and red that can be seen from space. If I contacted a few mayors, maybe I can get them to shine the image of a giant dong to the guys in the International Space Station.

Making his way to what appears to be the surface of the moon where a stone table for his corpse has been prepared. Laying down on the slab, Superman’s heart stops and he dies, after which the zohtt leaves Superman’s body only to find that there’s no living object to possess on the moon. But wait! A conveniently placed television commercial by Superman informs the zohtt that it too will die unless it jumpstarts Superman’s heart again. Faced with little choice it dashes towards the body again only to find itself trapped! For you see, dear readers, Superman was laying on top of a trap door housing a Superman robot with a heart made out of Sulfur, the one element that can trap a zohtt! In order to trick the zohtt into leaving his body, he used his super…heart stopping power? And then quickly swapped places with the robot! And satisfied with capturing this deadly foe, Superman makes his way back to Earth.

This might quite possibly be the standard terrible terrible stories are judged by.

The Rating: 9/10, it plays out pretty much exactly the way it does on the cover, but it gets half a point deducted because it fails to get the point across of how disgusting it is to mix hundreds of gallons of bloods together, and another half point because the story was just that terrible. 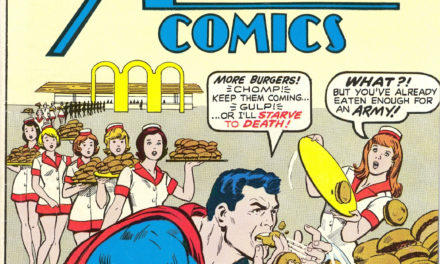