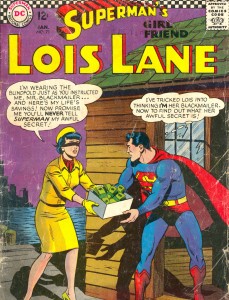 The Cover: Has Superman sunk to a new low? He’s found out that someone has been blackmailing Lois Lane and instead of trying to help her out, he pretends to be the blackmailer himself and figure out the secret himself. Now that’s a class act. But…if he is pretending to be the blackmailer, is he counting on Lois to recite her terrible secret back to him just for good measure?

The Story: This story is merely the back up feature in the comic, the first half is some kind of story about Superman being turned into a cat, so we’ll just skip right over that.

Our story kicks off with Lois descending some stairs into a dirty building where a hooded figure stands playing a movie on a reel threatening Lois with some kind of insidious blackmail. Immediately, we jump to later on where we see Lois leaving the bank with her life savings in a box and throwing it out the window of her speeding car to leave it in her drop spot. As she continues to make these payments to her blackmailer and she becomes more frugal in her day to day life, she makes the decision to sell her Superman memorabilia for money. As she’s packing up her stuff to be sold, she’s caught by her sister Lucy who immediately runs off to tell Clark about her wheelings and dealings. You know, Lucy, maybe you should be happy that your sister is finally getting over her insane crush over a man who has put her in the path of danger so many times and can’t help but two-time her all the time. After being contacted once again for more money by a note left on her typewriter, Lois gets an advance from Perry on her pay and goes to meet her blackmailer at the docks.

As she shows up at the dock to handover the money, Superman reveals himself to be the one who left the phony random note and asks her who is blackmailing her and why! But…he never explicitly states that he is offering to help, just that he wants to know why! After Lois declines to share her soul-crushing secret, Superman decides to do some sleuthing on his own and heads to Lois’ hometown as Clark Kent. Clark Kent interviews Lois’ schoolteachers, the police and her family trying to dig up the dirt on her. Yeesh he really wants to know Lois’ darkest secrets. He’s so suspicious of her, that when the Sherriff mentions that 30 years ago when Lois was born, someone stole 6 cows. Clark tries to seize upon this and looks for evidence of Lois’ involvement. Really, Superman? Did baby Lois crawl out of her crib and just run off with 6 cows?

While Superman continue to snoops around Lois’ home, she is back in Metropolis preparing to meet again with her blackmailer at a swanky restaurant. When she meets him, he turns out to be a handsome man who is blackmailing her so that she will be forced to marry him. That’s right, this has become a story about some wannabe rapist who goes through all of this insanity so he can doink Lois Lane. To further convince her that he is the blackmailer, he takes her back to his place where he shows a film of Superman setting off a secret weapon out in the ocean without noticing a nearby boat below him. The fallout from the ship sprayed onto them causing them to die terrible deaths! And yet…after seeing all the crap Superman has pulled off in the past, most of us would probably shrug our shoulders and say “meh, it’s Superman, what do you expect?” Anyways, so he decided to blackmail Lois instead of Superman directly since he figures Superman would just kill him and destroy the evidence. But wait, why would he blackmail Superman in the first place if his goal was to doink Lois anyways? And why wouldn’t Lois tell Superman who would then incinerate him? Ah I give up! The blackmailer then gives Lois the keys to his hot rod to give her time to think it over. While driving at what seems to be top speeds, Lois becomes distracted by her dilemma and flies off a cliff! She somehow survives this with minor injuries and wakes up in her hospital to find a newspaper with the headline “Blackmailer of girl reporter jailed by Superman!”.

Superman then strolls into the room like some kind of super-pimp with flowers and begins to tell Lois about how he traced the car registration to the blackmailer who has an extortion record and proceeds to show Lois another version of the film reel. Superman admits that he was indeed reckless and didn’t notice that he was spraying debris over the ship. BUT! The people he killed were really aliens from another world that were vicious criminals wanted for killing all life on another planet! They were so evil that Superman got honorary citizenship for a different planet for his actions. He explained that the top-secret weapon was really a weapon from intergalactic space police and he helped guide it onto it’s targets. So yeah…Superman has just admitted that he helped kill a bunch of bad guys, I got nothing witty to say about that.

To cap it all off, Superman then berates Lois by saying “Don’t deal with blackmailers!” despite being a person who committed murder. He then says “thanks!” while Lois cries into her bed thinking that instead of saying thanks, he should marry her. Superman with his super-hearing is obviously creeped out by this and slowly backs out of the room making up some kind of flimsy excuse about being on patrol. Our tale ends with Lois entering her office to find that Superman has returned all of her money and souvenirs.

The Rating: 6/10: While we do have Superman meeting up with Lois Lane at the docks as a blackmailer, the scene plays out a bit differently and I had to deduct another point for being such a brain hurting story.