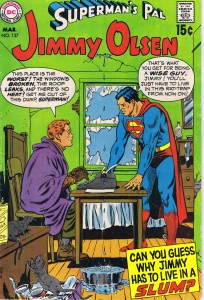 The Cover: Why does Jimmy Olsen even consider Superman a friend? Superman apparently can’t take a joke or something, as he tells Jimmy off for being a wise-guy and rebuffs his pleas to being rescued from the slum! Can we guess why Jimmy has to live in a slum? Well, I’m pretty damn sure it’s because Superman is being a dick and is forcing him to live here somehow. “You’re gonna live here, Jimmy and if you leave I’ll set you on fire with my heat vision!” It truly is a dump. There’s a broken window, and the ceiling has cracks in it, indicating the bathtub above will drop down and crush Jimmy’s head. We can’t forget about Jimmy’s own tenants though, the rats who seem to be scrabbling at a carton of Milk that Jimmy has left outside. Maybe he’s trying to make some cheese?

The Story: Our epic tale of Olson poverty begins with entering a slum to investigate the shabby tenements on behalf of the Daily Planet. Finding a rickety rundown apartment, Jimmy enters to find himself under attack by…a rat! But luckily he’s saved from this vermin by a woman who hurls a “pop” bottle at the rat nearly hitting him in the process. After apologizing for the near-miss, the woman introduces herself as Terry Dean and decides to show Jimmy around the tenement. She introduces him to all the hard on their luck tenants and their tales of sorrow, and she learns that Jimmy is a reporter. After being introduced to these guys, Jimmy is fired up to write an article on the ghetto conditions but unbeknownst to him, a shady guy is tailing him and Terry and places a phone call to a mysterious person.

The next day, when Jimmy arrives at the Planet to enjoy the praise of his peers, he finds Perry crushing the article in his fist for some reason. Maybe to symbolically crush Jimmy’s hopes and dreams? Perry reveals that he’s being pressured by advertisers to crush the story but he’s going to put Jimmy on paid vacation to unmask the mysterious slum lord without having to put the Daily Planet at risk.

Jimmy goes to his bank to withdraw his life savings of 300 dollars to live off of since he apparently forgot that Perry put him on PAID vacation and rents an apartment in the slum. Jimmy moves in to perform an investigation and promptly begins to destroy his own apartment with his inability to close a window without destroying the glass and using a cabinet door without breaking his cabinet and gas range. Hey, Jimmy, maybe the reason your apartment is in such a bad condition is that you’re destroying the entire place!

But while eating a delicious can of cold beans, Jimmy hears a woman’s scream coming from outside the window. Instead of running down the stairs and out the door to get to the other building where the screams are coming from, Jimmy leaps out the window and swings over a clothesline to a window on the other side. Dude, you just smashed a window by closing it too hard and a cabinet just by using it…do you really think that it’s such a good idea to hang on a clothesline?

Apparently so, as he enters through an open window to find himself in Terry’s bathroom with her only wrapped in a towel. Didn’t Terry find it frigging weird that Jimmy leaps in on her in the shower through her window? Guess not, as it turns out the problem was that her shower won’t turn off. Jimmy solves this by simply aiming the shower head out the window to soak anyone outside!

Having rescued her from this horrendous fate of water overload, Jimmy begins to put the moves on Terry and invites her for a meal in his apartment. But horrors, roaches in Jimmy’s pad of love are already eating it! Deciding that Superman can’t possibly be busy fighting Lex Luthor or saving a woman from a burning building, Jimmy uses his wrist watch to summon Superman like some kind of butler to clean away the roaches. Obviously seeing the roaches scare away his chance of getting any nookie tonight from Terry, and Jimmy asks Superman for some help. Superman, probably still a little sore over being used as an exterminator, rebuffs Jimmy and flies off. Jimmy quickly recovers from this refusal and uses this chance to prove his manliness and goes back to seducing Terry with his suave reporter charm.

In a parting dick move to Jimmy, Superman flies out so fast that he causes a draft which pulls Jimmy’s manuscript outside and into the hands of a sleazy person who just happens to be working for the slum lord. After being alerted to Jimmy’s persistent efforts to uncover him, the slum lord has Jimmy kidnapped, beaten, thrown into a basement and his head shaved. After meeting the slum lord, who has covered his identity with a pair of sunglasses, Jimmy is lead back to the slum but not before announcing that he must plan his birthday party. Yes, this man thought that even though he is letting Jimmy see his body, a good part of his face and hear his voice and even announcing that he has a birthday party to plan, the sunglasses would protect his identity. Does he think he’s Superman or something? Just to show how ridiculous this is, go to a mirror, put on some sunglasses and look at yourself.

After meeting back with up with Terry, who gives Jimmy a blonde bob wig for no other reason than to make him look like more of a tool than he normally is, Jimmy quickly calls up a friend and asks them to trace some plate numbers to determine the owner’s identity. After that, Jimmy organizes the slum tenants and they all pay a visit to the birthday bash of Barret Maxwell, a philanthropist who turns out to be the slum lord owner! When Barret denies all of this, Jimmy Olsen summons Superman who reveals that Jimmy memorized the gas meter of the basement he was trapped in and he left a note on the floor to prove that he was kidnapped there. After Superman hauls away Barret, we get a happy ending where the city takes over the ghetto and Superman rebuilds the place at super-speed and they rename the projects “Olsen Gardens”. Wait…why didn’t Superman rebuild or repair the original apartments in the first place? And they actually call the place a project…so why is Jimmy so enthused about having it named after him?

The Cover: 6/10: Ok, Jimmy is indeed living in a project and he does have a broken window…but at no point does Superman tell him as a result of him being a wise-guy that he is forced to spend the rest of his days there. I feel cheated but we did get to see Superman act like a dick a couple of times.