This week’s Crazy Comic Cover is a continuation of last week’s Action Comics where we left off with Superman and Big Barda falling down a pit dug by an alien in a sewer. Yeah, aliens spend their time digging death traps in sewers. 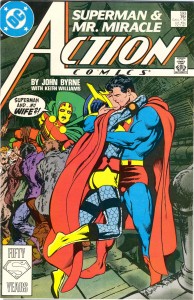 The Cover: Ok, we’ve seen Superman type up confessions about being a criminal, throw an Abraham Lincoln look-a-like off a plane and prevent people dying of thirst from drinking water. But this may be the first time we’ve seen him kissing another man’s wife in front of him…oh wait, nevermind it’s been done. But this is the first time we’ve seen Superman make out with Big Barda! And that’s exactly what we have here. Superman and Big Barda with their arms wrapped around in each other in the manner of fierce lovers while Mr. Miracle is being carried away by an army of hoboes. Where did these hoboes come from? Are they Superman’s hobo army or are they a group of perverts who don’t want Mr. Miracle to interrupt the free peepshow they are getting?

The Story: Our tale of epic debauchery starts off with Mr. Miracle coming home after disabling his extremely elaborate front door look to find Darkseid sitting on a lounge chair with a snifter in brandy in hand awaiting him. How pimp is that? Darkseid is just chilling and looks like he could be used as the poster boy for Hennessey VSOP.

Meanwhile, the producer of the film is talking to Sleez telling him that they have sold thousands of copies of the film. So yeah, now there’s thousands of copies of Big Barda on the street ala One Night in Paris. Sleez informs him that he’s got an even better actor for him and opens the door to reveal the man of steel! The producer of course doesn’t believe it’s him so Sleez forces Superman to smashes his desk to bits of pieces. This convinces the producer who still can’t use Superman because he thinks with one thrust, Superman will just destroy any unfortunate actress paired up with him and no one wants to see a video of just Superman playing with himself. Gotta say though, I am fairly sure everyone would buy a video of Superman even if he’s just flying solo. But oh yeah…the debate that every Superman fan must have had engaged in at least once in their lifetime has finally shown up in comic books. Can Superman get it on with a regular woman and not destroy her? Apparently not, so that settles the debate for eons. But back to the story! Sleez opens the door and reveals Big Barda who is going to be Superman’s partner in the skin flick.

We cut back to Scott who is on his way to Suicide Slums to investigate when he decides to go into a long winded flashback about his origins on Apokolips, which wasn’t really necessary and a good way to fluff up the page count. So while he’s reminiscing in an alleyway, he gets jumped by a bunch of frigging hoboes! These hoboes then begin beating him, throw him in a sack, throw in him in a dumpster filled with garbage, weld the dumpster shut with welding equipment and finally push it into the bay. Ok, forget the excessive amount of entrapping used to make Mr. Miracle seem awesome when he escapes the trap, but why do hoboes have welding torches when they could sell it to buy booze? Regardless, after escaping, Mr. Miracle stumbles upon the filming in which the producer is frustrated at the lack of Superman’s passion in his film when making out with Big Barda. You’re really concerned about passion, dude? You’re not Martin Scorcese! You’re not going for a bloody Oscar, just get Superman to whip it out and you’re golden! According to Sleez, this is due to Superman’s moral fibre preventing him from performing. Personally? I think Superman just has erectile dysfunction but whatever.

So Mr. Miracle bursts in on the filming and interrupts it while going through a monologue about being able to resist Mr Sleez’s mental powers which weren’t really explained in the first part of the story. So if Big Barda wasn’t able to resist it even though she was a female fury, does that must mean she has weak moral fibre? So one anti-climactic fight scene later, Superman is chasing Sleez down a gas filled sewer tunnel when Sleez chooses to light a match and blow himself up rather than face Superman. After clearing the situation up with Barda and Mr. Miracle, Superman returns back to the slum hospital to find that the patients he assumed were being irradiated by Sleez still alive. Apparently the radiation keeping them alive is being generated by something else and he is left to puzzle over it.

The Rating: 6/10: The scene on the cover does play out with a few modifications. Instead of taking place in a sewer, it takes place inside a dirty apartment. Barda is wearing her usual kind of trampy outfit instead of her battle armor and the hoboes are not present for the kiss scene. So despite all of these changes, the spirit of the cover is there with Superman and Barda playing tonsil hockey. This is possibly the greatest Superman story of all time. Forget the Alan Moore or Grant Morrison runs; we wanna see Superman get it on!