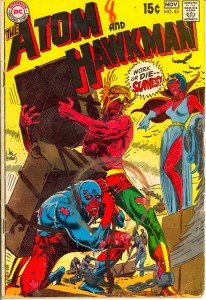 The Cover: I love this cover, we’ve got what appears to be Jean Loring dressed up ina a fancy dress commanding a ragged Hawkman and Atom to work or die! It’s got that whole Egyptian slave thing where they are building a pyramid or something. There’s so many questions to be asked about this cover: Why is Jean batcrap crazy? Why don’t they turn around and whip a rock at her?

The Story: Our tale of  desert slavery kicks off with Jean Loring during a trial when facing the jury, she is struck by a moment of the crazies and sees the face of a dude she sent to the electric chair. Acting a little crazy, she excuses herself and rushes back to the hotel where we cut to Ray Palmer arriving at the hotel only to find Jean Loring having reached the realm of absolutely nutso and has began trashing the hotel lobby and chasing people with lamps. He then proclaims that something must be wrong as Jean Loring would NEVER go crazy and do something like this….AHAHAHAHAAHAH maybe like 15 years later Brad Metzler saw this book and got the inspiration for Identity Crisis from this.

Taking charge of the situation the way only a superhero knows how, he slaps her face back into coherence and then because he happens to carrying an alpha-wave detector he notices a strange source of radiation in the floor of their hotel room. Sending Jean to her room to keep her safe, Ray shrinks down into the carpet where he finds some old crazy haired man in armor armed with an alpha wave gun who beats the stuffing out of him and forces him to flee by growing again. Ray collapses onto the floor and wakes up later only to find Jean gone. Leaping to his feet, he grabs a phone and calls the only person who can help him find a missing person…not Batman, not Superman, not even Ralph Dibny..but Hawkman whose idea of detective work is hitting someone in the face with a mace.

So Ray leaps through the telephone line to talk to Carter and explains the situation. Carter reveals that coincidentally, a suit of armor matching Ray’s description was found in Death Valley so they go on a road trip to the desert. Using some science mumbo-jumbo, he assumes that there is a race of tiny aliens that live in the desert. Yes, that is his first guess…tiny aliens living in a desert. As they shrink down and approach a palace they see in the distance, they are attacked by flying machines and captured where they are taken to see Jean who has drank the kool-aid and refers to herself as Queen Jean now.

After being brought to Jean, her captors reveal that the reason that they captured her is that she is the long lost decendant of their original queen and the law of their land is that the queen must be crazy. Seriously, they have to have a crazy queen so they purposely made some kind of machine that makes her insane. This is possibly one of the most flimsiest reasons to make someone insane this side of a Jimmy Olson or Lois Lane comic. They toss some restraints onto Hawkman and Atom that will explode if they use their powers or try to escape and put them into to work digging holes and carrying rocks. But it also seems they aren’t trying to build anything in particular…so…yeah. But they get sick and tired of this after a day and what seems to really break the straw of the camel’s back is hearing Jean laugh at them! Given the sound effect is “hee hee hee heeyah!” I can’t blame them. So they fake their deaths by pretending to fall off a cliff and then sneak back into the building that powers the machine that is stopping them from using their powers and overpower the guards there.  After beating them up, they demand that they fly away with Jean who is still crazy as a doorknob. Returning to a safe location, they grow back to large size but surprise! Jean is still crazy and seems to have the mental capacity of a 5 year old and that’s how the story ends! Seriously, that’s how it ends, with Jean crazy and not even a “to be continued”. Just The End. Like this.

The rating: 7/10: While the intent of the cover is in the story, we’ve got Hawkman and Atom working for Jean Loring who is commanding them, she never says the line and they don’t get that haggard in the story. In fact the title of the issue is kind of off as well, since the Queen never commands them to die. What really makes this issue impressive is that the storyline isn’t neatly resolved in one book. There’s the long term impact of Jean being seemingly nuts.

David Diep is a News Editor for ComicBookDaily, an Assistant Manager at Big B Comics in Hamilton, Ontario and once beat the Atom in a judo fight.