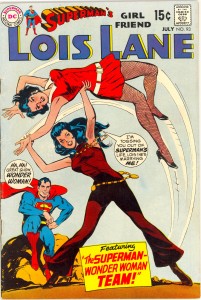 The Cover: What can I say? It’s Wonder Woman flipping Lois Lane over her head while Superman is sitting on a rock enjoying the show. Why are they fighting? Well, because Wonder Woman is apparently like the bully at the beach who kicks sand in your face and takes off with your girl. Superman is really loving the girl on girl show since he’s watching it with a big smile on his face. Apparently it doesn’t matter that Lois has spent years pining after him. He’s like some trophy that can be won.

The Story: Our tale of girl on girl action kicks off with Lois’ dreaming about Wonder Woman marrying Superman. After waking up from her terrible nightmare, Lois turns on the tv to find Wonder Woman asking Superman to help her put on a charity show at the circus. After being put on the event by the Daily Planet, Lois meets with the recently de-powered Diana who asks her to lend her a power stone from the museum while keeping it a secret from Superman. So despite having nightmares about her stealing her man from her, Lois decides to play along and help out.

Lois begins to follow the pair around town as Diana takes Superman around the hipster district as her character at the time was changed to be more of a 70’s hipster chick. Superman and Diana then get their dance groove on at the local disco when Superman is having so much fun dancing, he dances fast enough to set the floor on fire! Admonishing himself for his clumsiness, Superman reminds everyone that this is why he can’t relax with ordinary people. This once again gives ground to the theory that he could never have sex with an ordinary woman because he might break her by accident!

Lois is so distraught over this that she enrolls in a class that teaches acrobatics, karate and judo. Why? Well we find out the reason in her dream. She seems to believe that if she can beat Wonder Woman in a fight, Superman will love her instead. So the lesson that this comic is trying to impart is that if you can use physical violence, you can win someone’s affections.

The next day, Wonder Woman meets up with Lois while Superman watches and they just have at it. Despite all the training Lois has done, Diana proceeds to pummel the crap out of her and throws her all around the place while Superman looks on silently but grinning. While we don’t get to see repeated panels of Lois being beaten up, the text description reveals that Lois has been beaten to a weeping pulp to the point of numbness and possible paralysis. What’s Superman’s response? Stopping the fight? Taking Lois to the doctor? No, the guy just up and flies away with Wonder Woman, leaving Lois to cry in the dirt in pain! This has to definitely rank in one of his finest womanizing moments ever.

So after they fly off, Lois decides to spend her time spying on Wonder Woman. Since Wonder Woman no longer has her powers and can only fly as a result of Lois lending her a special rock, Lois believes Wonder Woman still isn’t a perfect match for Superman. As she uses viewing technology to watch Superman and Wonder Woman, she sees Wonder Woman talk to Superman about her superpowers and performs a bunch of feats like saving a NASA shuttle and…getting blown up by a nuclear bomb! Yes, apparently in the DC Universe, nuclear bombs can be detonated by accident in the U.S without any repercussion.

Later on, Diana shows off the house she bought for her and Superman to live in after they marry and takes, I mean demands, Lois go watch her shop! Now that’s how you rub it into someone’s face. While trying on a wedding dress, Lois notices Diana acting funny and afterwards, breaks into the house only to find…Wonder Woman in the basement! Yes (we should have seen this coming by now) it turns out that Diana has been captured and an imposter has taken her place. All of a sudden the imposter shows up and captures them both. She reveals that she really is a Kryptonian criminal from the Phantom Zone that recently escaped. Why was she tossed into prison? Well, she came across a crashed alien probe that had technology that turned pebbles and sticks into food that was meant to revolutionize the planet and provide food for the starving masses. And since she wanted to sell it and become rich, she destroyed the probe and evidence when the Kryptonian police investigated. For her crimes she was sent into the Phantom Zone and only recently escaped. How she got the idea of posing as Wonder Woman and marrying Superman is beyond me. Maybe she just wanted to be able to get her freak on with someone without breaking them?

As the imposter is about to blast Lois out of the picture, Superman shows up hurling red kryptonite dust at fake Wonder Woman to subdue her. As he flies off with the Kryptonian criminal to return her to the Phantom Zone, Superman mentions to Lois that he found her by following her voice because he wanted to tell her he decided not to marry Wonder Woman as he cared for her too much. Wait, did I miss the part where Wonder Woman or Superman proposed to each other? Maybe in the DC universe if the media says you are right for each other, you just go with it. Also, if you care for her so much…why did you just fly off while Wonder Woman beat the living tar out of her? Ah, romance the Kryptonian way.

The Rating: 7/10: We do get a fight between Lois and Wonder Woman and they do wear similar outfits on the cover. The big difference is that while Superman has the giant grin on his face on the cover and on the inside, we don’t get him cheering on Wonder Woman inside. The only way this could get better is if they decided to mud wrestle each other.