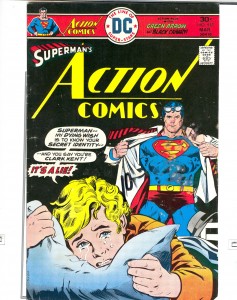 The Cover: We’ve all seen this cover and we’ve all thought that we’re pretty darn lucky this comic wasn’t out during the time of Frederic Wertham or he would have had a field day with this one. Despite the fact that if you remove the dialogue in the balloons it looks like Supes is about to sexually assault this young lad, the cover is actually about the kid crying that Superman is Clark Kent. Does this kid actually hate the idea that Superman is a reporter that much that he has to cry into his pillow?

The Story: This issue opens up with Superman trying to stop a train robbery by a ridiculously named villain, the Whirilicane, a villain who has the powers of a hurricane and a whirlwind and fails miserably in addition to having a lame name. Having let the villain escape, Superman responds to the distress call of his friend, Pete Ross. Meeting with Pete, he learns that Pete’s son, Jon, has lost the will to survive and as a big Superman fan, his only desire to live on is to learn Superman’s secret identity. Yes, I’m serious. Life for Jon is only worth living if he knows his idol’s secret identity. Deciding it’s for the greater good, Superman strolls in and reveals his identity only for Jon to break down crying and proclaiming him a liar. The lad reasons that there is no way Clark Kent could be Superman.

Superman tries to convince him by disguising himself as Clark to prove he’s able to fool his co-workers but is spotted by Steve Lombard who thinks it’s all a prank on the kid and tears away his disguise. With his plan spoiled, Superman flies away with Jon to think up another plan, but on the way comes across the Whirlicane again. Leaping into combat while carrying a small child (probably not the smartest move there, Supes), Superman defeats the Whirlicane and finally asks Jon what would convince him that Clark Kent really is Superman. Jon looks inside Clark’s medicine cabinet and his proof is inside.

What is that convinces him that Clark really is Superman? The fact that he doesn’t have any toothpaste, mouth wash, band-aids, shaving cream or a razor!! He literally says “You’re Super, your beard doesn’t grow, you can’t get cut or get a headache” and that’s what convinces this kid? Holy crap, he’s dumber than a rock! Forget the fact that Superman will never have to get a haircut because apparently he can’t grow hair, that arctic breath of his is probably poisonous since he never brushes his teeth or use mouthwash! I’m also pretty sure that if you can feel pain from being punched in the face, you can get a headache. The better excuse should have been that our puny Earth aspirin would have no effect on his Kryptonian biology. Anyways, after being convinced that Clark is Superman, Jon gets better and promises to keep Clark’s secret to himself.

The Score: 9/10 relevance: The cover essentially plays out the same way in the main story, just without some of the dirty context we give to it.