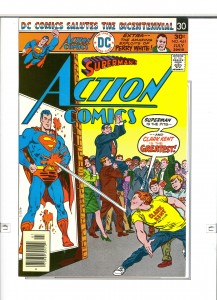 The cover: Looks like everyone has finally looked at all the covers of the previous Action Comics and released that Superman really is a dick! They’re throwing tomatoes at posters of Superman while they’re parading Clark Kent around town on their shoulders. My question is: why are there large 1:1 scale posters of Superman plastered over alleyways? Did Superman in his supreme arrogance decide to fly over the city plastering his mug all over the place, spending time and money that could have been used to help those who need it?

The story: Our tale of tomato throwing is a continuation of a previous issue which left us off with Steve Lombard being attacked by an assailant named Karb-Brak who seems to think that Steve is Superman while the real Superman is busy fighting off a gang of flamethrower wielding thugs in asbestos suits. While Steve dodges the assault, Superman uses his heat vision to head up the asbestos suits to roast them out of them instead of waiting for them to die from cancer.

Having beat them, Superman flies back to work to rescue from Karb-Brak who begins to pummel the crap out of Superman before revealing that he has a super-power that Superman doesn’t have and then goes all Human-Bomb on Superman. Superman uses his super-speed to fly Steve out of there and escape the blast while Karb-Brak leaves the building in his “human sheath” of Andrew Meda. Really? You call your disguise a human sheath? I can think of so many dirty jokes that I dare not put them online. So we finally get the backstory on Karb-Brak; who is from the Andromeda Galaxy and is exiled from his own planet because he is allergic to his own people! His people have declared him “fatally allergic” to his own people and decide to blast him off into space. Well to be honest, this guy seems like such a dick I bet they lied to him were just poisoning him themselves to get him off their planet.

So anyways, whenever he comes into contact with Superman in his “sheath” he becomes weakened. He then declares Superman his nemesis and that one of them must die so that the other can live. Because it would make far too much sense to move to a different city or stay away from Superman. So he ducks back into his apartment where he has a “Psi-Machine” set up to implant suggestions into the minds of everyone in Metropolis to make them fans of Clark Kent. Why he is doing this? I have no clue.

The next day, Clark is mobbed by legions of fans while at work and decides to escape into a nearby park to shake off his fans when Karb-Brak shows up out of the blue to pummel him some more. Superman begins to fight back as the crowd gets caught up in the destruction and gets hurt. This fight reveals Clark’s identity as Superman and they begin to cheer him on as he begins to win the fight. So apparently Karb’s plan to win was to distract Clark with the crowd cheering for him? But instead it helps him fight better.

Holy crap, this is possibly the stupidest plan for winning a fight. Get people to cheer for your enemy?? Tired of losing, Krab flies off to get the machine to make the people cheer for him to gain the advantage. As he activates the machine, Superman sucker punches him out of nowhere and uses the psi-machine to mindwipe the people of Metropolis of his identity. As he is doing this, Karb begins to try and play the sympathy card on Superman by saying that he’s not an evil guy but he is just trying to survive. He says that Superman’s options are to stay and kill him or leave and let him live. And our story ends on that cliffhanger to be concluded in the next issue. Oh, come on! Dude, you called Superman your nemesis and planned on destroying him, do you really think anyone would have sympathy for you after that?

The rating: 1/10: At no point during this story did anyone declare a dislike for Superman nor was a tomato thrown! We got ripped off! Sure people were cheering for Clark but the best part of the cover was the blatant hatred of Superman! So not only did the story suck, the cover never even happened!

Extra: You know what the saving grave of this issue was though? It’s his PSA by Superman about how it’s a terrible idea to crash a party and it’s a form of trespass. Apparently party crashing was such an endemic problem in the 70’s that they felt Superman had to do a PSA about it! 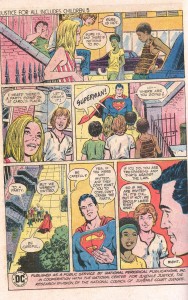