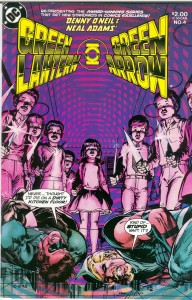 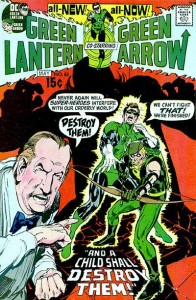 The Cover: This is a Crazy Comic Cover (CCC) first! We’re going to be featuring a comic that has not one but two covers! The O’Neil and Adams run on GL/GA was fairly groundbreaking run which covered a wide variety of social issues. But who cares about that stuff, let’s look at how messed up these covers are!

Taking a look at the original cover, we’re treated to some frumpy man with a bow tie siccing some kind of monster on our duo who are reluctant to attack whatever it is they are fighting. Given the shadow of the creature and the title of the story, we are led to assume it’s some kind of monster or deformed man-child.

The second cover which was done for the reprint, is some children of the corn stuff, as we’re in a psychadellic purple room where our green duo who are rolling around on the floor with what looks like a bad case of diarrhea. Yes, Green Lantern, there is a good chance you are going to die on a kitchen floor that is dirty because you just pooped on it.

The Story: You know it’s going to be a wacky story when it opens up with a pretty woman walking down the street and bumps into an older man walking with a young girl and after exchanging some harsh words is immediately assault by some kind of unseen force caused by the young girl at the old man’s urging!

Cut to Hal, Oliver and Dinah on a drive towards Dinah’s new job as a teacher when all of a sudden, they are attacked by a flock of birds. Quickly whipping out his sub-sonic transmitter arrow, Green Arrow makes quick work out of this deadly flock. You know, if Green Arrow carries so many trick arrows with him, does he even have room in his quiver for regular arrows for guys that can’t be felled by boxing glove arrows? Arriving at the school that Dinah is going to be teaching at and being greeted by Grandy the school cook who also is the dude who attacked the woman at the start, our green fellows find themselves encountering a hostile school administrator who expresses a disapproval of costumed superheroes.

Deciding not to kick the crap out of this with a emerald boxing glove or a boxing glove arrow, GA and GL make their way back to their car to speed off. Looking from above, Grandy looks as our emerald duo and orders the little girl Sybil to “make them hurt”. On their way to the car, they spot Carol Ferris who is sporting a spiffy new wheelchair courtesy of the psychic whammy she got at the start of the book! Ha! Bet you didn’t see that coming! Carol explains that she wasn’t there to steal the hubcaps off their car but her fiancée Jason Belmore is one of the administrators of Dinah’s new school. As they drove away from the school with Carol, their car undergoes some kind of shaking and throws them off a mountain before they are safely caught by Green Lantern who whips out a Pegasus construct to fly them to safety.

On their way back to the school, a sudden downpour of rain causes them to take shelter in a barn because Green Lantern has gotten so lame that he is afraid to waste the energy on creating a rain shelter for the group. Personally, I think he’s full of crap and is using this time to try and put the moves on Carol.

Meanwhile back at the school, Dinah makes the mistake of letting her class out 10 minutes early and is creepily reprimanded by Grandy whose speech makes him sound like some creepy rapist. Of course, this is an immediate cue for Dinah to go back to her room and undress in a scene that must have been perfect material for boys back in the 70’s to fantasize about.

Dinah makes her move and immediately is discovered by Grandy whom she beats up before she is taken down by the little girl Sybil on the orders of Grandy. The little boys and girls then drag Black Canary off to the cellar where Grandy explains his crazy antics as stemming from a desire for strict order and one day he found Sybil wandering alone through the woods and he then took care of her. Wait…did he just say that he found a little girl in the woods and then basically kidnapped her? Super-creepy! After explaining all of these, Grandy reveals his deadly plan for Black Canary….wasps! Yeah seriously, this dude has a wasp nest in his basement and unleashes them on Canary so they sting her to death.

After Hal is done hitting on- I mean after the rain clears up, our duo arrive at the school to check their suspicions when all of a sudden, Grandy sics the children on the duo which to be honest against Green Lantern does squat until Sybil steps up to the plate and uses her powers to give them what must be a case of chronic diarrhea as they crumple to the floor. But Dinah’s screams from the wasps gives Green Arrow enough fortitude to clench his bowels and fire a vortex arrow to distract everyone and free Dinah.

As they make their way back to Grandy and Sybil, Sybil has a random change of heart and turns on Grandy and pulls the building on top of herself and Grandy seemingly killing them. Green Lantern then takes this chance to put the moves on Carol and sweep her off her feet walking away with her into the rain leaving her innocent fiancée mere steps behind! Dick move, Hal.

Cover 1: 3/10: This never happened at all in the story! There was no giant beast nor were those lines ever said. A huge disappointment!

Cover 2:9/10: This second cover however is pretty much taken right from inside the story itself. The only difference is that the children aren’t holding knives on the inside of the story.

David Diep is the News Editor at CBD, an assistant manager at Big B Comics in Hamilton, Ontario and is known to be able to travel at superspeed to acquire comics.