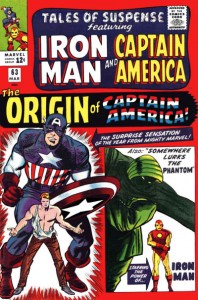 This comic book does not get the respect it deserves. March 1965 is very early for Marvel Comics, The Silver Surfer and Galactus were still a year away while the Amazing Spider-Man title was only 2 years old.

This origin issue comes exactly 1 year after Cap’s re-introduction in Avengers #4 (3/64). Stan Lee and Jack Kirby bring Cap up to date for the new Marvel Comics revolution. It is amazing how quickly Captain America hit his stride and became a staple in the Marvel U.

– Tough to find in very high grades, no CGC 9.8s exist while there are only 28 copies graded CGC 9.2 or better