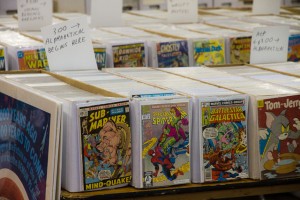 Hell Yeah! Another year and another Fan Expo attendance record.

Big B Comics has set up at every Fan Expo so far giving us a behind the table view of this dramatic growth over these past two decades.

I heard some comic dealers griping about how the show has changed, how it’s not about comics anymore.

I disagree; it’s still very much about comics. Lots of dealers were there selling the highest of the high end, the lowest of the low end and everything in between. If you were a comic collector or just had general interest in reading them you’d find lots at Fan Expo.

The show has grown around comics, as a dealer I’d love 100,000 back issue comic customers, sadly I didn’t get it but I was still satisfied with the amount of buyers there were at the show, we sold a lot of old comics. I will say that our higher end books were the slowest of all out “departments”, we rocked it on the $3 bins and we did very well on our regular bins we sell at half off at the show. On the comic front we underperformed on the high end books, yeah we made a couple of bigger sales to other dealers but no real volume to speak of to collectors.

There is an old saying in comics, “you’re only as good as your last collection”, and while we had good stuff we’ve had better in preceding years. All this means that if you bring stuff people are not looking for you will be taking the stuff back home.

Big B is doing OK though thanks, we ramped up our current graphic novels massively and for the 1st time ever our graphic novel sales rivaled our back issue sales; again that doesn’t mean we didn’t sell a lot of old comics, it means we sold a heck of a lot of graphic novels.

Like I said up top, there were a couple of dealers that complained to me about the lack of buyers but again I say nay! Buyers were plentiful; they simply weren’t after the tired old stock most of us were bringing to the con.

Refreshingly, there were a couple of comic dealers at the con doing brisk business selling recent back issues, comics out within the last 5 years or so. These front runners were doing well because they were servicing a need we old timers refuse to service; we “vintage guys” look down on the moderns. Well what we were doing was looking down the aisle at the buyers buying up the stuff at the booths with recent stuff.

OK maybe I’m oversimplifying. For me it seemed like there were a few too many dealers selling recent stuff at vintage prices, thankfully most of those books were loaded back in the van they came in on.

If I’m a dealer selling comics and I have so many tables each year at the con and I find my fortunes waning I have a few options, one – get less space to cut costs and select only the stuff I think has the best chance to sell, two – keep the same space and adjust the inventory I carry to better reflect what the crowd is buying, throw in there the need to adjust prices up or DOWN according to market and there is a fighting chance.

So Mr. Dealer buddy next time I see you at the show please don’t tell me about how terrible your back issues are selling and how there are no buyers left. What I’d like to hear about is all the successful changes you’ve made to your pricing strategy and your product mix.

And to the comic book consumer, I thank you for driving the market  by rewarding with your hard earned money those of us adaptive enough to satisfy your changing needs.