Fan Expo coverage was a major part of our efforts here at Comic Book Daily for several years: we’d get every able-bodied writer down to the Metro Toronto Convention Centre to attend all the exciting panels, walk the floors in search of cosplay, and give it all that great Canadian spotlight. For old time’s sake I used our “Complete Coverage” banner on this post.

All that has been made possible through media passes provided by Fan Expo for our site and many others. Yes, that’s right, we try and get free passes to shows so we can cover them. It’s normally a win-win: we provide coverage and the show gets publicity from said coverage. Unfortunately a few years ago things started to change: at first Saturday passes were cut but we received a group of passes for the other days. Then this year we were limited to a single person receiving a pass for Thursday and Sunday. I won’t be surprised if we don’t get anything next year.

You may be thinking to yourself “why don’t these people just buy a ticket like everyone else” and that’s exactly what happened this year. Except if you’re paying your own way you don’t want to attend five or six panels that don’t really interest you, or spend significant amounts of time interviewing or listening to others. When it’s your dime you want to do what you want to do.

I don’t believe Fan Expo needs or really wants any press coverage: they have 100,000 or more email addresses of people who attend their show. A built-in captive audience they can sell to whom they know like the product they offer. One free pass means one body in the show who didn’t pay and is taking a spot in a packed convention centre that could have been occupied by a paying customer.

Our site’s audience is interested in hearing about what back issues were available, how they were priced and what that means for the coming year. No cosplay, no toys, no video games. Just comics. End rant. 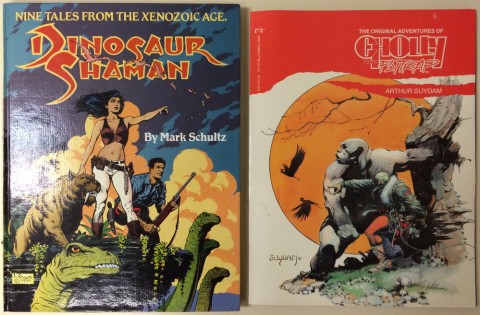 I normally write about collected editions and comic art. This year I walked Artist’s Alley and saw a lot of great stuff, but I’ve stopped buying original comic art so it was bittersweet; I decided if I can’t hang it on my wall for display there’s not much point in having it. I hesitated several times in front of Esad Ribic, Lee Weeks and Ramon Perez with thoughts of commissions dancing in head, but it was the old pull nipping at my heels.

I was on the hunt for old graphic novels and collected editions, in search of mighty bargains. I came across a signed and numbered Cadillacs & Dinosaurs collection from Kitchen Sink Press and an old Epic softcover from Arthur Suydam I didn’t have. Both were 40% off stickered price so that fulfilled my need for something from Fan Expo and was my total Thursday purchase.

While randomly wandering the comics section I came across Imran Hoda and his significant collection of everything I love about comics in collected form. I spent several hours chatting and browsing what he had for sale and came away with a new connection and an overloaded armful of books. He had a Rocketeer Artist’s Edition first print for $175 and that went early; what a deal!

My eye was on Artist’s Editions around the floor: since the price isn’t set by IDW I wondered what going rates were and there seemed to be a standard $125 / $150 / $175 price point based on size and original cost. Kirby’s New Gods and Watchmen were $125, Tor and Romita’s Spider-Man Vol 2 were $150 and Steranko was $175. That formula was reduced a few places: I came across a Watchmen Artifact Edition for $100 and a Tor for $130 but those were exceptions. And as I walked through the show in its final hours on Sunday most of those Artist’s Editions were still on the shelf. It’s a big item to lug around the show, and almost all of them are still in stock at Diamond and readily available from your local comic shop.

The collected edition offerings were all over the place: discounts from full U.S. cover to 40% off U.S. cover and everything in between. Walt mentioned high sales at Big B Comics on their graphic novels and they were selling for U.S. cover; they had an excellent selection of what was hot. Deep discounts were usually offered on bargain books or those which held little interest. At least you could save paying the tax everywhere.

And that sums up the overall shopping experience of Fan Expo: people aren’t looking for bargains, they’re looking for stuff. If that stuff meets whatever need is felt while attending they buy.

Most of my time was spent chatting, which gets difficult when there’s no space to stand still. I finally met Charlie Kim in person, chatted extensively with Rachel Richey about reprinting Canadian Whites, and caught up with people as we met in the aisles. Good times.