I guess I’ll stick with picking books from some of my favorite runs of comics and tackle Barry Windsor-Smith’s terrific run in Conan #1-24, focusing on one culprit in particular the “low distribution” issue #3.

In the late seventies and early eighties Conan was a very hot title and the first twenty-four issues of the series were immensely popular, and rightfully so, they were and still are some of finest comics ever produced. 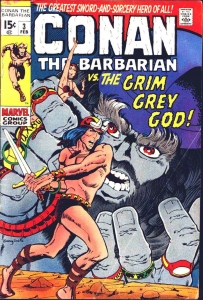 Our Overvalued pick Conan #3 carried a significant premium price and still does for having a “low distribution in some areas” notation attached to it in the Overstreet Price guide. For an elusive book every store I visited seemed to have one, and at a premium price. At the time I just considered myself lucky to find one, paid the premium price and happily added the treasure to my collection.

Fast forward to today. Conan the Barbarian comics have fallen on hard times. I can’t account for the deep drop in interest in these books. Perhaps they were overheated price wise for too long. The character Conan may have lost some of his appeal when Arnold Schwarzenegger got too old to play the part in movies. Outside of issues #1 and #23-24 (first Red Sonja issues) which hold their own, the rest of the issues in Conan #1-24 don’t get near guide. As a matter of fact, I have personally purchased a few over the past couple of years at about 60% of guide. I have witnessed many books going for less than 50% at auction and on eBay. I am talking books in the 9.0-9.4 grade range.

Conan #3 has been hit hard as well, however the price of the book is still the 2nd highest of the entire run and even if it doesn’t get near guide, costs much more than other books in the run. Why? What does “low distribution in some areas” even mean in a post internet world. Surely Overstreet doesn’t believe there is still a shortage of books out there when anyone with access to a computer and credit card can purchase books from practically anywhere in North America.

I searched for an answer to my “low distribution” question and actually found one. It is from a column written by Chuck Rozanski called “Fooling Bob Overstreet”.

Chuck Rozanski, for those of you don’t know, is the owner of Mile High Comics in Denver Colorado. He is also the man who has lived every comic dealer and comic collector’s dream by discovering the most famous and influential comic collection on the planet – The Edgar Church collection. Chuck writes a column called Tales from the Database, and I have read a few posts from it in the past and really enjoyed them. If you love comic’s it’s usually a worthwhile read even if you don’t agree or like what he has written…

I had not read Chuck’s “Fooling Bob Overstreet” column until recently and may have discovered at least a partial answer to my “low distribution” question. Here is an excerpt from the post that is most relevant to our Conan #3 spotlight pick. I do encourage you to check out the whole post though to put this into its proper context.

I want to tell you a short story about Conan #3. For the past 25 years, that issue has been listed in the OFFICIAL OVERSTREET COMIC BOOK PRICE GUIDE as having low print run in some areas. Ummm, I don’t think that really true. Back in the early 1970’s, CONAN was our best-selling title. A peculiarity about those early days, however was that the CONAN paperback books were all still in print, and fans really cared about which issue adapted which R.E.H. story. Issue #3 contains the adaptation of Grim Gray God, which was especially popular. As a result, we were constantly sold out of issue #3, while issue #1 tended to stick around longer because of the higher price. To rectify the problem, all of the Denver area dealers started marking #3 as “scarce” and pricing it above #1. To our amazement this “fact” ended up in Bob Overstreet’s price guide soon thereafter. To this day, I can’t help but smile whenever I see that notation in the guide.

Yikes! A need a moment pause for Overstreet content and how it get’s there.

Overstreet does have an opportunity to “fix” current Conan pricing with a 30-40% haircut to most of the books in the #2-22 run and a bigger one to issue #3. I can wish can’t I?