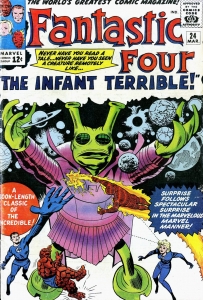 In this month’s edition of Overvalued Overstreet we turn our attention to comic retailers and collectors current nightmare: the dreaded “run” book.  I always chuckle at this term as all comics become part of a run if the title lasts for any period of time. Key and semi-key issues emerge over time like the first issue, first appearances of important characters, secondary appearances of key villains, anniversaries, and major storylines help define “important” books within a comic title. The books that feature none of these special characteristics are often labelled “run” books and in general are in much less demand.

Today’s Overvalued Overstreet pick is an early Fantastic Four comic that fits the “run comic” criteria. Fantastic Four #24 has none of the special characteristics listed above to make this book special in any way. The story itself harkens back to pre-hero Marvel monster stories of the late fifties/early sixties when Jack Kirby would lead off the books with a seven- page horror story. This book has the monster from outer-space and all Kirby/Lee did was add the Fantastic Four and expanded the story to eighteen pages. Even the cover is reminiscent of the old pre-hero Marvels with an over-sized monster and small human beings. It’s an OK change of pace comic and the issues that immediately follow this book are stellar and tend to make you forget about this one rather quickly. I think the biggest draw to this comic is the fact it is an early Fantastic Four book in this iconic Kirby/Lee run. 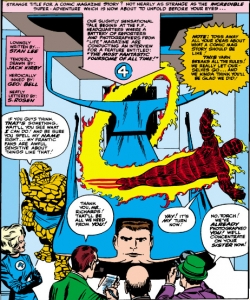 The problem I have with this book is of course the Overstreet Guide price. The 46th Overstreet Price guide values for Fantastic Four #24 are 8.0 $252 / 9.0 $564 / 9.2 $875. That is not a cheap run book by anyone’s measure. These are the same prices for Fantastic Four issues #22-23 as well. I think those two are run books to but are a much higher quality. What I mean by this is they do bring something to the table, but nothing that really jumps out at you. Issue 22 has the first return of the Mole Man and increased powers for Sue Storm, #23 features another Doctor Doom appearance and cover. Fantastic Four #24 not so much.

The marketplace is not buying into Fantastic Four #24 at those prices either. Current GPA has these books selling at 20-25% below listed guide or less. I have seen this book for sale starting at 20% below guide price in 9.2 with no takers. It is a bit of a dilemma for both the collector and dealer trying to buy or sell the book. I use to buy these kinds of books all the time when I was a young collector because they often looked like such a bargain. In hindsight if you are collecting a run of books I would buy run books at the lowest grade you can tolerate in your collection, and save your money to buy better keys or semi-keys. I wish I knew that way back when.

We will be featuring many more Overvalued “run” books here in the future.