Welcome back to another ever so intellectually fulfilling and challenging discussion of the weirdest and inane topics to come out of comics ever! This week we continue to toe the line a little more and more as we are plumbing the depths of our superhero curiosities.

How come some superheroes are so ineffective at using their powers? 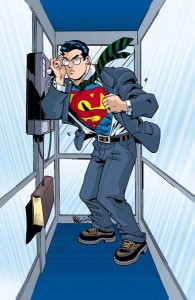 Ok, not to pick on comic book writers as they can only do so much with characters to keep them interesting. They can’t have them constantly operating at maximum efficiency otherwise there would be no epic fights for their artists to draw. But let’s step back here at look at some characters who don’t seem to have their abilities used to their maximum effect by writers. First up: Nightcrawler who has recently become deceased in the pages of the X-titles. This is a character who can constantly teleport all over the place with a fairly long range. Why doesn’t he take a bunch of heavy bricks and teleport about people and just drop them on them at high speeds? Or even better yet, instead of wasting effort and risking his life in punching contests, he should constantly be grabbing onto people and teleporting them high into the air and dropping them. Even if he doesn’t want to kill them, he can drop them from a height enough to break their legs like in The Dark Knight.

Next is The Flash and Quicksilver and pretty much any other speedster. Speedsters all around comicdom must have been cheering in the recent pages of Thunderbolts when Quicksilver actually used his speed to great effect to beat up Mr. X arguably one of the best fighters in the Marvel universe according to his abilities. Quicksilver just moved so fast and used wrecked debris to cripple him. That’s how a speedster fight should go. Heck, Superman is supposed to have superspeed as well but he never really seems to use it in a fight. It’s sort of addressed in the pages of Superman/Batman when Batman, Wonder Woman and Superman have a discussion about Wonder Woman being a faster combatant than Superman even though Superman has superspeed. But while Batman draws a comparison between Bruce Lee and some other guy whose name I can’t remember but he was a runner of some kind, he doesn’t factor in that Superman can fly really fast and clothesline someone at superspeed. But like I said, we can’t fault writers too much as it must get difficult to keep on thinking of different ways for superheroes to beat up their foes.

Why do so many black superheroes/villains have black in their name?

We’re having a ridiculous time here today at CBD! When Marvel, DC or any other company creates a character of African descent these days, they just give them a regular superhero name. But was it always like this? Well looking back at comic book history I think they decided to create a name like the Panther or Lightning and decided to slap the word Black in front of it and called it a day. Shall we look at some examples?

And that’s just from the main two! We can be thankful that they resisted the urge to call Luke Cage; Black Power Man. Maybe they thought that readers wouldn’t be able to tell what race a character was unless they made sure to indicate it in their name. I mean, how else are you going to tell that Black Panther is black without the black? Everyone would automatically assume that he’s white! On the otherhand, only African Americans have this problem in comics, as you never see characters of Asian or Middle Eastern descent throwing up prefixes in their supernames. Otherwise we would have guys like Japanese Doctor Light or Chinese Shang-Chi and no one wants that!

David Diep is the News Editor at CBD, an assistant manager at Big B Comics in Hamilton, Ontario and is known to be able to travel at superspeed to acquire comics.