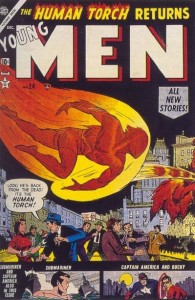 I have always questioned the accolades given to Showcase #4. Yes it did begin the reintroduction of the DC superheroes but it did not represent the first time heroes were reintroduced  nor did it even do the best job of it.

Remember that DC had a continuing presence in the superhero genre with its flagship Superman and Batman titles hardly missing a beat through the late 1940s and early 1950s. Showcase 4 (Flash), Showcase 22 (Green Lantern) and Brave and Bold 28 (JLA/JSA) and the others just added some old characters into an existing pool of ho hum products offered by DC. Nothing new was brought to the table with Showcase #4. I always point to November 1961’s Fantastic Four #1 as the true start of the next step in the evolution on superhero comics.

So Marvel did it better a few years later but they also had a go of it a few years before DC, before the Senate hearings in the U.S. and before the Comics Code.

Timely Comics was one of the big superhero publishers of the Golden Age of comics. Sub-Mariner, Human Torch and Captain America were all successful titles, all lasting to the very end of the 1940s. The last original content Captain America was #74 published in October 1949. Timely’s flagship Marvel Mystery, the Sub-Mariner and the Human Torch all ended their runs earlier in 1949.

Timely’s publisher Martin Goodman and his right hand man Stan Lee sensed a successful revival of their superheroes was possible in late 1953, a mere 4 years after giving up on the genre. By this time Goodman was publishing comics using is distribution company’s imprint Atlas.

Young Men #24 features the retold origins of Captain America, Sub-Mariner and the Human Torch. The book gave us “Back from the Dead” a 6 page Captain America story drawn by the mighty John Romita, “The Sub-Mariner Returns” an 8 page story by industry giant Bill Everett and “The Return of the Human Torch” a 9 page story drawn by the impeccable Russ Heath.

A CGC graded 9.6 copy of Avengers #4 recently sold for over $90,000. Avengers #4 (Mar/64) of course featured the return of Captain America. The funny thing is that Marvel never addresses the Cap appearances of the early 1950s in Avengers #4 nor in the retelling of Cap’s origin in Tales of Suspense #63 (Mar/65). The Golden Age Marvel revival of the early 1960s treats this 1950s phase as if it didn’t happen.  Years later in Captain America #153-156 (1972) it is explained to us that the Steve Rogers of the early 1950s was not the actual Steve Rogers but a replacement planted by the FBI to take the missing Cap’s place. Sounds pretty wishy washy to me!

These lost years are collecting heaven and Young Men #24 should be investing gold!