This will come as no surprise to comic fans but Ultimate Spider-Man isn’t dying, Ultimate Universe Peter Parker is dying and will immediately be replaced with a new character in a new Ultimate Spider-Man costume.  Lame.  It seemed odd that a hot book would have the title character killed off but for a second I thought Marvel was going to change the playing field and actually kill off a character.  Shame on me.  Image and press release  below. 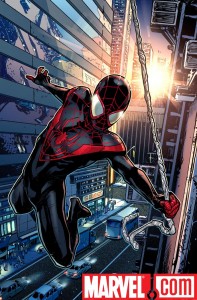 “We called this story Death of Spider-Man for a reason,” said Axel Alonso, Marvel Editor In Chief. “This is a huge story that’ll have fans around the world talking for a long time as we set the stage for the debut of our new Spider-Man.”

The Ultimate Universe is irrevocably changed with the conclusion to Death of Spider-Man in June’s polybagged Ultimate Spider-Man #160, but right now you can get in on the red-hot story that leads to the birth of an all-new Spider-Man, including new printings of the sold out issues.