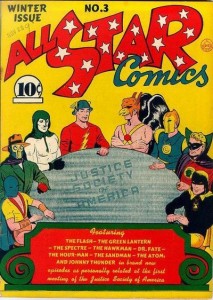 I thought I’d go with a heavy hitter this week. All Star Comics #3 ranks up there as one of the most important superhero comics ever published. The book features the 1st superhero team ever, the Justice Society of America (JSA).

The more I read on the origins of this team the more I sense that then DC editor Sheldon Mayer and writer Gardner Fox came up with the idea to capitalize on the superhero craze that was really hitting stride in 1940. They limited the JSA to heroes that were not featured in their own titles. The idea being that as characters gained popularity in the JSA those characters would then be granted their own title.

Today’s comic book fans may find it counter intuitive not to have had Superman and Batman as part of the original line up that included Atom, Flash, Sandman, Spectre, Hawkman, Dr. Fate, Green Lantern, Hourman and Johnny Thunder (Thunder was at the meeting but was not featured on the cover because he didn’t actually join until issue #6) but this was actual house policy. If you have your own title you cannot be in the JLA, rules are rules.

The female heroine Red Tornado, a humor character that had appeared in DC’s All-American Comics was almost the 1st woman to join the team but on her way to the meeting she ripped the seat of her pants on a nail and graciously backed away from the scene. Too bad!

All Star Comics #4 announced that Flash had won his own quarterly title, his last issue was #5. It must have sucked to be a Flash fan and see him leave but hey, Flash got a feature to himself. Green Lantern left the team for the same reason while Superman and Batman, both already with titles of their own were honorary members of the team but were not regularly featured in the stories.

By the mid 1940s the superhero craze had softened, this was probably the reason DC allowed the Flash and Green Lantern back onto the team, their return revived the title for a short time. The All Star Comics run eventually ended with #57 (Feb/Mar 1951).

It was JSA member Flash (Jay Garrick) that was first to re-surface in the Silver Age, his appearance in Flash #123 (Sept. 1961) really did open up a huge can of worms with the Earth 1, Earth 2 thing. The problem was, fans loved the re-appearance of the Golden Age Flash and soon after, in Justice League #21 (August 1963), the whole JLA was reintroduced in the ominous “Crisis on Earth-One” story. Writers from then on were having fun and paying little attention to continuity loose ends, something DC would try to rectify in 1985 with Crisis on Infinite Earths (note how a harmless two Earths had somehow turned into an infinite amount of them).

All-Star #3 was ground breaking, it set the template. Other publishers followed suite with their own teams. Today we just assume that teams are a natural part of comics, and they are, and it was All-Star #3 that showed the way.  I can personally say that many of my favorite stories in comics involved teams; their interplay when done right makes for great storytelling!  There had to be an All-Star Comics #3 and I’m glad it was actually All-Star Comics #3, a book filled with characters we can trace back to through today’s most popular heroes.

It should be noted that the JLA didn’t officially have an adventure together until All-Star #4, All-Star #3 being the “let’s introduce each other by sharing stories of our exploits” issue. These were the 1st stories of a team of superheroes working together to beat the odds. This was new territory for comics and it’s probably best that Superman and Batman were not there to steal all the glory.

Surprisingly the markets don’t much like All Star Comics #3.