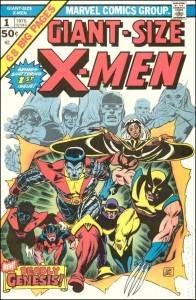 I’m told I have a gift for exaggeration though I don’t believe I’m exaggerating at all when I declare this week’s Undervalued Spotlight pick, Giant Size X-Men #1, to be the 3rd most important super-hero comic ever published!

Strong words I know but when you think about it this new approach to the X-Men really did revolutionize the industry. Within a few short years X-Men and all the other X title spin offs, like early arrivals New Mutants Alpha Flight, dominated comic sale. It was the success of the X-Men that pushed DC to create the New Teen Titans. The net is full of sites that can describe those years better than I can here but in the few short lines that I have I can tell you that fledgling comic shops were carried by the X-Men in the 1980s. There even used to be an index back in the day basing all other title’s sales to the X-Men, the X-Men being the benchmark of 100.

Let’s not forget this comic represents the 2nd full appearance of Wolverine. The book also features the 1st Nightcrawler, Storm and Colossus appearances. So it’s a Bronze Age heavyweight on character content alone. Giant-Size X-Men #1 segues into X-Men #94 where the new team take over the X-Men title that was relegated to reprints since 1970. The rest as they say is history.

Though Len Wein and Dave Cockrum are the credited creative team on this book we have to note that Chris Claremont is the uncredited assistant co-plotter. Claremont would stay on as writer on almost all X-Men books for the next 16 years including the legendary Dark Phoenix Saga arc and the God Loves Man Kills graphic novel.

It sure is fun to think of the whole new world the success of the new X-Men opened up. This Mutant premise was like a birthing nebula for new stars, Sabretooth, Dazzler, Rogue, Longshot were some of the earlier fresh new characters introduced. More would come. We were on to something good.

The market has been flat on this book for so long. A CGC 9.2 can be bought for guide, while 9.4 copies for just over guide x 1.25. Over the past few months these prices have been inching up so you better act fast.

This comic is one of those markers on the road, a pivotal moment in comic history, a harbinger of change, it is an important comic and one that is needed in your collection.