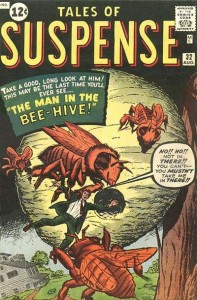 Tales to Astonish #27’s “The Man in the Ant Hill” story came out in January of 1962. It of course introduced Hank Pym and was a fan favorite right from the get go. I don’t like calling it a superhero comic because it was really a Sci-Fi/Monster story in the tradition of all the monster type stuff Marvel was putting out at the time in titles like Journey into Mystery, Strange Tales, Tales to Astonish and Tales of Suspense.

It was the great fan response to the TTA #27 story coupled with the recent success of the newly launched Fantastic Four and the Incredible Hulk titles that led Marvel to re-introduce Hank Pym as Ant-Man the costumed superhero eight months later in Tales to Astonish #35.

Tales of Suspense #32 which came out a month before Astonish #35 was published as a Sci Fi/monster story much like TTA #27. It was obviously Marvel’s hope that the fan  response to “The Man in the Bee Hive” would be the same as it was to “The Man in the Ant Hill”.

I’ve read online that the two stories were produced to see which fans like more but that seems unlikely given the time between publications. More likely Marvel was reacting to the positive response of the ant hill story with a similar premise bee hive story.

Still for collecting purposes the two issues are forever linked and given the massive interest that Tales to Astonish #27 is enjoying thanks to the new Ant-Man movie this link surely opens up a bit of an opportunity to do a little speculating.

That said I’d like to announce this week’s Undervalued Spotlight as Tales of Suspense #32.

Our Hank Pym is Lucius Farnsworth (Farnsworth by the way first appears in Strange Tales #96), Farnsworth is a man with special powers. When his bee keeper Eric tries to rob him Lucius shrinks himself and Eric down to bee size. Eric must enter the hive and try to escape. Just when the bees are about to eat Eric our mysterious Lucius calls off the bees, brings them both back to regular size and tells Eric that the whole ordeal was a mental illusion.

Could Lucius Farnsworth have been another central character in the Marvel U? After all he was a mutant who could change the size of himself and others. Obviously not since very little became of Lucius. What would have happened if the bee hive story came first?

One of the hottest segments of the collecting market right now is the pre-hero Kirby Monster books. Tales of Suspense #32 falls into the Kirby Monster category and has enjoyed strong and growing demand as such.

Given this strong and growing demand for the Kirby Monster books and this issue’s inescapable association with one of the true power books of the Marvel run I’d say Tales of Suspense #32 shapes up to be a great long-term investment.

The good news is the book has not gone crazy just yet. Recent sales data is lacking because supply is tight but if you can snag this book in solid mid grades for anywhere near guide and a half I’d do it.