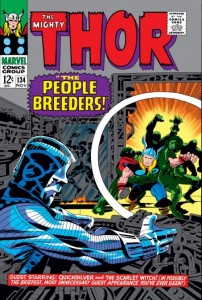 This week guest Spotlight writer Mike Huddleston brings us a gem. I’ve always loved Mike’s picks and the insights he adds to them. The man knows his undervalued comics!!

Take it away Mike!

The Undervalued Spotlight has landed once more on the great Kirby /Lee run (issue #126- 177) of the Thor title. Thor is as popular today as he/she has been at any point in his /her existence.  There are lots of great books in this run and today’s spotlight is one of them featuring the first appearance of the High Evolutionary (HE).

Thor stories in general tend to be long saga’s that don’t have too many definitive starts and stops. Usually there are few irons in the fire and when one storyline comes to and end you are half way into another. Our feature book today is no exception. Thor has just finished his battle with Ego the Living Planet and the Rigellians, and now Thor is looking to find the previously abducted Jane Foster. The Rigellians use a Psyche-Search gauge to track Jane’s whereabouts and they join Thor and “The Recorder” (looks like a Machine Man prototype) to help in the search. Once on earth they track the signal to a mountain range where they battle through an attack with the assistance of the Knights of Wundagore. They are taken to a castle belonging to the High Evolutionary and we meet him for the first time. He looks alien, but find out next issue he is in fact a brilliant human genetic genius named Herbert Edgar Wyndam. We also find out the Knights of Wundagore are highly evolved animals that speak like human beings and are called New Men. The High Evolutionary has been experimenting on evolving animals for quite some time and this day he is working on wolves. Elsewhere and much to Thor’s delight he finds Jane safe and sound teaching the New Men in a classroom. All is well. Well not really, the High Evolutionary’s latest experiment goes horribly wrong and he creates a highly evolved wolf that becomes the fierce some Man-Beast. The same Man Beast that would become Warlock’s deadly enemy in the future. The Man-Beast is on the loose and about to attack Thor when this issue comes to a close.

Issue #135 follows and is an excellent book in its own right. The action packed conclusion to this story provides many more details about the High Evolutionary and is a great battle book. I highly recommend this book to own as well.

The first appearance of the High Evolutionary is the highlight of issue #134 for me and the main reason I feel this book has a chance to appreciate in price in the future. Just who is the High Evolutionary?  Is he a friend or a foe?  Is he a tragic hero or a dangerous mad scientist? He is all of the above, and what he is depends on what side of his straight line vision towards his objective you fall on. People with this single minded sense of purpose can be wildly successful and equally catastrophic. This is what has always fascinated me about him. You would think writers of all stripes (comic or movie script) would have a field day with this character.

In his comic book appearances The High Evolutionary has usually been a “big event” type character. He doesn’t rob banks. His stories are usually multi-issue sprawling epics.

The High Evolutionary doesn’t pick his spots when it comes to battling someone in his way either counting Galactus, The Beyonders and the Celestials as entities he has crossed swords in the past. The High Evolutionary as met many characters in the Marvel universe but the Marvel character he has probably had the most profound effect on is Adam Warlock, from their first meeting in Marvel Premiere #1 to his current association with the new Guardians of the Galaxy.

Thor #134 and its companion book #135 are both solid books. I don’t see any real downside to them. The upside to #134 is all about the future of the High Evolutionary. Issue #134 has already taken an important first step and broken out of “run status” by having the High Evolutionary first appearance singled out and a slightly higher price established for the book. For this book appreciate further it will probably require a movie or a wildly popular comic event to do so. I think the High Evolutionary and his genetics background make him an ideal candidate for a future Hollywood movie. It would not be a stretch to see a High Evolutionary/ Rocket Racoon/Warlock centered movie featuring the Guardians of the Galaxy at some point in the future.

You will need some luck finding this book at prices listed in the Overstreet guide. Thor #134 has been edging up for a little while and higher grade copies are getting harder to obtain. I personally have found this book a little tough to find in grade as it has a dark grey cover similar to Amazing Spider-Man #6 that shows off every flaw. 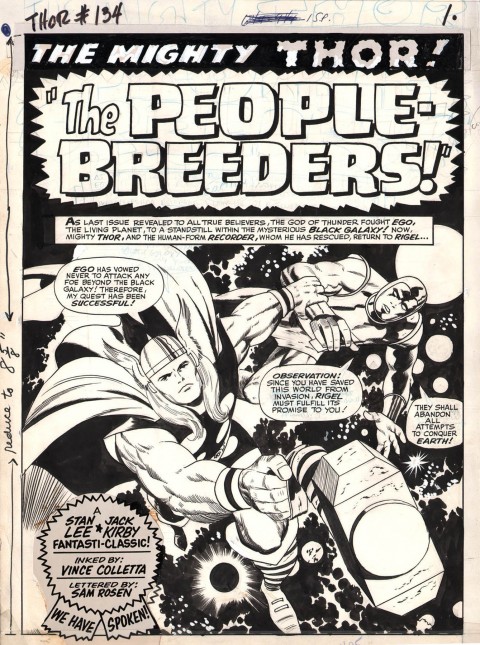 Reasons to buy this book: