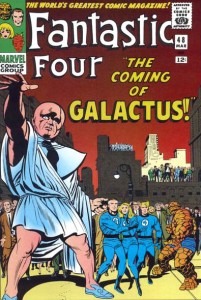 Young Mike Huddleston and I have been exchanging a few fun filled emails lately. We’ve been sending each other mini lists of books we think are overvalued. Mike and I both think this premise would make a great regular column by the way.

So Mike mentions a certain issue of Fantastic Four that he thinks may be overvalued but in passing uses Fantastic Four #48 as an example against which to measure the injustice.

I thought about what Mike said for a while, kicked around the net a bit and finally came to the conclusion than Mike’s point could not be ignored.

In a bit of a long winded way I’ve explained how it came to be that this week’s Undervalued Spotlight is none other than that true classic Fantastic Four #48.

The more I look at today’s speculative comic book market landscape the more I see value given out to future potential.

(In this Spotlight I’ll stay with Fantastic Four and use FF #45 and #52, competitive contemporaries of FF #48., as comparables).

Yes I realize that all this has to be tempered by the fact that there are more #48s on the census, these census numbers are a reflection if it being a big book for a longer period of time. Relative to the other two books I’ve mentioned its current supply is actually tighter. Prices are suppressed not because of an oversupply but because of a relative lack of interest. Besides, the Guide values are not reflecting census numbers!

How big are the Inhumans going to get? Will the Black Panther be a bigger deal than the Surfer? These questions have yet to be answered though the market seems to be weighing in with its thoughts.

I want to revisit FF #48 and call out a couple of more trump cards (can you have more than one trump card?). This week’s Spotlight pick features the first appearance of Galactus. Galactus is a big deal, has always been a big deal at Marvel and has been the most excoriatingly frustrating cosmic character Marvel couldn’t pry out of Fox Studio’s hands. Is the value of Fantastic Four #48 being suppressed because the characters introduced can’t be fully used by Marvel Studios?

Historically speaking it’s tough to argue against FF #48, the book launches the Galactus trilogy with issues #49 and #50. This mini arc is considered a high watermark of comics in the 1960s and many call it the best story Jack Kirby and Stan Lee ever collaborated on, this arc has deservedly reached legendary status.

I think more love will come FF #48’s way once the market realizes what the book brings and what it could be bought for relative to other options.