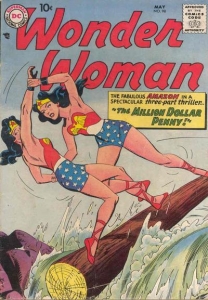 All Star Comics #8 is all the rage these days. I know a few guys just itching to get their hands on one before the prices get out of reach. But it might be too late: prices have shot up so quickly on this book it’s dizzying. I’m sure there is more room for the book to appreciate but it’s awfully discouraging when an entry-level low grade 1.0 has to set you back over $12,000 USD.

This week I’ll offer an alternative to those who want to play the Wonder Woman game.  I’d like to feature Wonder Woman #98 as this week’s Undervalued Spotlight.

Some of the hottest books on the market right now are Silver Age DC keys. While some of these keys, like Brave and Bold #25 (Suicide Squad) offer up original creations many others like Showcase #22 (Green Lantern) offer up the first Silver Age incarnations of already popular characters.

Wonder Woman, Like Superman and Batman transitioned from the Golden Age to the Silver Age as the same character, unlike say Green Lantern, Hawkman and Flash who all received new alter egos. Wonder Woman #98 can only work then if it is accepted as the first Silver Age issue and from all my readings I have to say the hobby has embraced it as such. Wonder Woman #98 is a Silver Age DC key.

When I was coming up through the ranks in the 80s and 90s Silver Age Wonder Woman collecting was centred on issue #105 ($3000 current guide). While issue #105 still commands tremendous demand and respect it has now been joined by #98 as a must have Wonder Woman book from this era.

Stupid scarce in high grade, nothing has been graded above an 8.0 and only 29 as of this post on the CGC census.

So it feels like this book has already popped but I know there are plenty of ungraded copies out there. Looking at the CGC census on the “Scarce” issue #105 (80 copies as of this post) tells me there are plenty #98s still to be dug up.

Best is to buy off someone who has one. Don’t let it get to market!