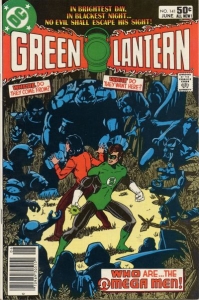 This week I had a specific approach I wanted to take with the Spotlight. We were talking shop around the shop recently and we somehow ended up discussing concepts/teams/characters that showed a heck of a lot of promise when released but somehow never really amounted to much.

I rhymed off Legion Of Superheroes but met some resistance as some seem to think the Legion has somehow made it, “look at the value of Adventure #247” they told me.

Then Micronauts came up (deservedly) so did DC’s Lobo and a few others we argued about.

The second name I threw out was Omega Men. Remember them? The Omega Men were huge when they came out, hot and full of potential. What the hell happened?

This week I’d like to shine the Undervalued Spotlight on Green Lantern #141, the book features the first appearance of the Omega Men.

The Omega Men are Cosmic DC at its finest, they fit nicely into the Green Lantern world that spawned them.

The Vegan system has 25 planets that are being ruled repressively by the Citadelians, the Omega Men are a group of rebels from some of these planets formed to fight the evil rule of the Citadelians.

I remember the hype around Green Lantern #141 back when it came out. DC was coming off the successful launch of the New Teen Titans (November 1980) and it looked like they had another winner with the Omega Men in the summer of 1981. By April 1983 the Omega Men had their own title, it lasted 38 issues.

Somewhere along the way something went wrong, the series faltered and was cancelled, the Omega Men had lost their luster. Looking back at that time can we perhaps point a finger at the whole DC Cosmic Universe? The whole Green Lantern Corps waned by the mid-1980s too, perhaps it was DC’s re-focusing on new trends like Batman post Dark Knight and on their fledgling but promising Vertigo comics. Realism was in, far out cosmic was out. That’s scenario is a possibility anyway but what is certain is that the Omega Men never lived up to their potential.

Thankfully comic book collecting is all about resurrections, re-discoveries and quick and massive appreciations in value. I think the Omega Men are a prime candidate to once again find favor.

Looking at the GPA results I think the cat may already be out of the bag, CGC 9.6 copies are now getting $135, and last year they were getting $50. Perhaps not totally out of the bag, as of this posting there were no graded copies available for sale, a sign that things haven’t gotten out of hand just yet.

Not to worry though, this is a book that should still be in bins at local comic book shops and at comic cons, if you are willing to dig you’ll find them. Nice tight raw copies are what you should be after.