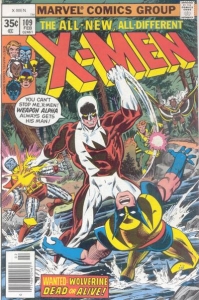 (Walt) – Mike Huddleston has a keen eye for undervalued comics. Case in point this gem he just sent in. Mike’s a great motivator too because now I have to try and top this next week! Over to Mike…

This week’s spotlight is on the All-New, All-Different X-Men of the mid to late seventies issues #94-143, and of course our Spotlight Issue X-Men #109.

This might be a bit of a hard sell given that most of those new early X-Men books today don’t even get the Overstreet guide price when at auction. I have watched many 9.4 graded books go for less than a 9.2 price, and lower grades attract even less attention. The title has been flat and beaten up price wise for some time now. All this from one of the most popular run of books in the Bronze age of comics.

There was a time when these books used to be white hot. I could describe it for you all day, instead we will travel back to 1981 and the 11th Overstreet Price guide, and review some of the prices of the day. Back then, Overstreet had only three price/grade points GD25, F65, and M94. For the purposes of this exercise we will list M94 only for all books.

WARNING! The prices listed below may cause dizziness, nausea, shock, disbelief, and occasional laughter/crying. Viewer discretion is advised.

Those are some mind-boggling prices. There were no Highest CGC graded, scarcity indexes, even Gerber Photo Journals back then to influence price. What you are looking at in the X-Men prices is an excellent example of pure collector demand. Where I think this demand came from I will explain in a bit.

First, I have read on this forum and others that early X-Men issues are as common as dirt. The market could still get flooded with countless high grade copies waiting to be CGC graded in fan’s collections. Is that really true?

When the new X-Men first appeared in issue #94 they were following up a long run of bi-monthly (4.5 years #67-93) of reprints. The new series continued to run bi-monthly –  for three years! If you were a comic company starving for sales, would you run a smoking hot property bi-monthly for three years? I don’t think so. The X-Men didn’t go monthly until issue #112 when interest/sales in the book was sufficient to merit a monthly mag.

Second, Wolverine the forgotten. The face of the new X-Men was Cyclops, Storm, Nightcrawler, and Colossus. You only need to look at the early covers leading up to our Spotlight pick #109 to see that. Wolverine’s first appearance on X-Men was issue #96, a thumbnail size Wolverine on #98, a back of the line Wolverine on the issue #100 team face-off cover where he is matched up with Iceman. He get’s one good cover on issue #104 and that’s it. Would you treat your star character this way? I don’t think so.

Truth is the X-Men didn’t really take off as a title until John Byrne came on board in issue #108 and he clearly had a plan for Wolverine. The X-Men’s first Wolverine centered story begins in issue #108 when we meet James and Heather Hudson who have been told by the Canadian government that they want their “property” Weapon X returned to the fold. James Hudson then known as Weapon Alpha is sent to bring him back.

Our spotlight issue #109 features a terrific Weapon Alpha/Wolverine/X-Men cover. A battle royale that ends with Weapon Alpha leaving, but promising to return with Alpha Flight to continue their battle for Wolverine. This the beginning of many stories featuring Wolverine in a more prominent role with X-Men. Mariko, Alpha Flight, Hellfire Club, The Phoenix Sage, and Days of Future Past stories follow and Wolverine and the X-Men popularity goes off the charts.

I believe the demand for those early X-Men books is a result of the success of the John Byrne/Chris Claremont issues #108-143. What do we collectors do when we latch on to a new series. We usually go back and collect them all. I think that those early bi-monthly books were hard to come by and the over-heated demand drove the prices up to the extent we see it in the 11th Overstreet guide.

I do think the whole X-everything of the 80s and 90s overexposure has hurt the X-Men title. I am still a believer that the quality of X-Men # 94-143 run will come around again. That run stands up well today and it doesn’t need to bend a knee to any run from any age of comics. You only need to look at those Spider-Man prices to see even the most popular characters can have a lull in popularity, but bounce back.

Wolverine today remains very popular, and I believe his very early appearances in the X-Men will be in demand long term as well.  X-Men #109 is one of the best and I highly recommend you pick it up now while it’s down and underappreciated and while you still can.

Reasons to buy this comic.