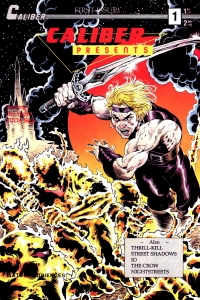 Long-time Spotlight fan and past guest Spotlight writer Darren Graham sent me this fantastic pick recently and I’ve been waiting for a natural moment to post it. By natural moment I mean one where Comic Book Daily editor Scott won’t yell at me for not putting up one of my own. Having spent the past weekend in the trenches of the Toronto Comic Con I figured I’d get some help this week. Though I will say even if I spent the weekend in a hammock sipping some Mount Gay I’d have been hard pressed to come up with anything better than what Darren has produced. Let’s throw things over to Mr. Graham…

There one book that’s been boggling me with its finite value… Caliber Presents #1, which has the 1st appearance of the Crow.  By comparison, The Crow #1 (2nd appearance) goes for almost double that book. What gives? I’d like to remove the shroud from Caliber Presents #1 and feature it as a pick for Undervalued Spotlight.

The Crow miniseries began in an 8-page story in Caliber Presents #1 in 1989, and then continued in The Crow #1-4. Creator James O’Barr made one of the great black and white indie comics of the copper age. It’s gritty, raw, gothic, and dare I say it, beautiful. And he can draw the hell out of Eric. He’s an iconic character and the story is moving and effective.

The Crow (1994) movie captured the essence of O’Barr’s creation: The gothic visuals, the amazing alternative/industrial soundtrack, the unintentional camp, the life-imitating-art tragedy around Lee’s death. This is a 90’s classic. A reboot has been in the works for years, and O’Barr wants a movie that is closer to his original story. In many people’s minds, (like director Alex Proyas’) Brandon Lee IS Eric, the movie is his epitaph and that character should be allowed to Rest in Peace.

Personally, I hope a reboot never gets made. It’s going to be impossible to top the original. But you know, these studios are looking for “mature” comic book properties right now. WB wants an R-rated director’s cut of Batman V Superman on Blu-ray (all because of the financial success of the R-rated Deadpool. I don’t see how that correlates to BvS, but I digress…). WB is planning on making movies from DC’s Vertigo line. Daredevil is enjoying a broader fan base thanks to the gritty Netflix series. Instead of a Crow reboot movie, how about a TV series that features new Crow stories and characters each season, something akin to HBO’s True Detective? I’m not fully versed on many of The Crow comics that came after the original, but I see the appeal of the concept. Love, revenge and redemption all come full circle.

Even if The Crow reboot remains in pre-production purgatory, I still feel Caliber Presents #1 will continue to rise in value. It’s a true Copper Age blue chip. The Crow graphic novel that reprints the CP #1 and The Crow 1-4 has sold around 750,000 copies. By comparison, the print run for Caliber Presents #1 and Crow #1 is estimated to be only 10,000 each. The book is undeniably popular.

A raw Crow #1 in NM condition goes for about $275, whereas a Caliber Presents 1 NM fetches around $150. I think what is causing this is fans of the Brandon Lee movie (who don’t know much about comic book collecting) buying The Crow #1-4… not realizing that they didn’t snag that ever-so-important first appearance… After all, The Crow isn’t on the cover of Caliber Presents #1, and the first appearance is hiding in an anthology title. I believe this trend will correct itself soon and the first appearance will be in more demand.

Completists will also be snatching up Deadworld #10, which has a low print run and the first cameo of The Crow as an ad drawn by O’Barr on the back cover. This guides for $4 NM-. You’d be lucky to get it for $20…  word has gotten out. Scour those dollar bins! I also noticed there’s a quite a few raw Crow books signed by O’Barr, and the price is the same or less than the unsigned. These signed books might be a winning choice.