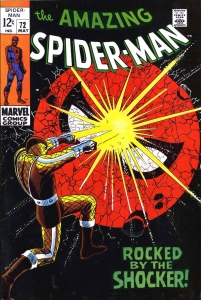 It’s crazy times in the collectible comic book market. Prices are hitting records on multiple fronts, in multiple genres and in multiple eras. You pretty well need a loan to buy any comic of note these days and it’s predominantly first appearances that all the money has been rushing into.

There’s nothing wrong with valuing first appearances as that’s where most of the value should come from, in my opinion, but other factors should temper these crazy prices we are seeing. For example scarcity of grade (or maybe better put – plenitude of grade) should be considered and weighed way more than it is.

This week I thought I’d take a reprieve from the madness and try to offer up a book with good fundamentals, good value and good prospects for the future.

This week I’m choosing to shine the Undervalued Spotlight on Amazing Spider-Man #72.

“Rocked by the Shocker” features a fantastic John Romita cover, for me one of the better covers of Romita’s run. This issue sets up the “Secret of the Petrified Tablet” arc that ends in issue #75.

Market prices for high grade copies of this book haven’t really moved in a decade, I don’t have the data in front of me but I’d guess they have actually lost ground. GPA shows CGC 9.2 copies getting 10% below Guide. So you are getting a black cover, Amazing Spider-Man from the 1960s with a great Shocker cover for less than Guide and less than $200.

I think there will be a reawakening of comics like this; you can throw in issues like Amazing Spider-Man #62 and #66 as well. When comparing what $200 can buy elsewhere I predict it won’t be long before books like this find favor again.